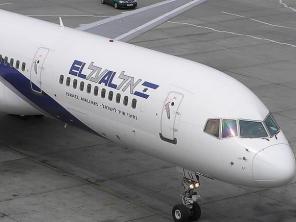 Ultra-Orthodox Jews increasingly refuse to sit near women on El Al flights
El Al customers, operators say large groups of Haredim, upwards of 15-20 people in some instances, are reportedly attempting to secure blocs of seats for themselves.
By Mordechai I. Twersky • Ha’aretz

El Al passengers are noting a recent phenomenon involving clusters of ultra-Orthodox men approaching female passengers prior to take-off and requesting to switch seats, according to El Al customers and tour operators.

While the phenomenon of lone Haredi men approaching female passengers is not new, and has in fact gone on for years, large groups of Haredim - upwards of 15-20 people in some instances - are reportedly attempting to secure blocs of seats for themselves. Their persistence is causing consternation and friction, while setting off a host of logistical problems during the course of some flights, according to a number of sources interviewed by Haaretz.

"I was sitting in my window seat, which is my favorite, and a Hasidic man with a family or group asked me if I was willing to change seats so they can sit men-near-men, women-near-women," recalls an El Al passenger who recently flew from Israel to New York, and who asked not to be identified because of her sensitive position in the tourism industry. "He offered me his place right behind where I was sitting, in the middle seat, but I told him 'no.'"

The uptick in Haredi requests aboard El Al flights to switch seats coincides with recent incidents involving some rigorously Orthodox Jews insisting on the separation of sexes in certain Israeli neighborhoods, on public bus routes and in public seating spaces, even at check-out counters in supermarkets and stores.

"There's a passive participation or outright acquiescence from El Al," alleges Mark Feldman, who heads the Jerusalem-based Ziontours. "Rather than defending the rights of the passengers, they are enabling this behavior to continue." Attempts at seat-switching usually occur during the hour preceding takeoff, and sometimes after, according to those interviewed by Haaretz. Some women who are approached oblige. Others refuse. Haredim have been observed enlisting the aid of flight attendants, who at times personally intervene to resolve these situations by asking women - and sometimes men - to switch seats.

"Why should I move?" a Haaretz reporter heard a male passenger complain on a recent El Al flight from New York to Israel after a flight attendant approached him. "This is my seat. I paid for it, and I reserved it." In other cases, passengers told Haaretz that flight attendants stood idly by or preferred not to get involved.

Seat-switching is particularly acute on longer El Al flights, say passengers and tour operators, as Haredim insist not only on a separation of the sexes, but also prefer to sit together in order to expedite the formation of a quorum for evening and morning prayers. Sitting together also allows Haredim to exclude from their field of vision films that they say offend their cultural and religious sensitivities, while also creating "distance" from passengers who consume non-kosher food that they bring onto the aircraft.

Passengers interviewed by Haaretz say the repercussions of seat-switching are felt almost immediately, and include delays before take-off incurred by passengers transferring luggage from one overhead compartment to another. They note delays in the distribution of in-flight meals, as flight attendants are forced to contend with reshuffled seating plans. In some instances, passengers report waiting an hour or more after they were told they would receive their pre-ordered "standard" meals, usually distributed after the specially requested meals - such as those for children, passengers with special needs, and consumers of strictly kosher food.

"This would never happen on Continental, Lufthansa or Delta," stresses Feldman, a 30-year veteran of the industry who says he has fielded dozens of complaints from passengers related to the seat relocations over the last several months. "Other airlines would not tolerate this behavior," he says. While Feldman acknowledges that other airlines may experience "individual or isolated cases," he says seat-switching is "an anomaly, organized by a specific group adept at manipulating the system and exerting peer pressure upon fellow passengers." Feldman, who calls the matter "exclusively an El Al issue" specific to an airline that is considered "Jewish," is floating a simple recommendation: "Why doesn't El Al announce to boarding passengers that seat-switching will not be tolerated?" Feldman asks.

A Haredi tour operator who works with the religious community places the blame squarely on the passengers.

"If both sides respected each other more there wouldn't be a problem," says the operator, who asked not to be identified because he also serves non-Haredi clients.

Meir Zaibel, a New York City resident who has traveled via El Al to Israel every year for nearly a decade, says he is familiar with seat-switching.

"I've seen this a number of times on my flights, but personally, I have no problem with it," Zaibel says. "I think the airline should cater to them [Haredim], just as they cater to the handicapped and those traveling with infants." Zaibel suggests the airline set aside specific areas to accommodate Haredim - a suggestion that other passengers who spoke to Haaretz reject as a "dangerous" and "unwelcome" precedent.

A spokesman for El Al - which is represented by the Israeli public relations firm of Ran Rahav Communications, Ltd. - released a statement to Haaretz maintaining that "the convenience of passengers and the delivery of uncompromising, quality service, serve as the basis of El Al's reputation."

The statement notes that "in-flight and ground crews are charged with addressing every problem and need related to the welfare of the passengers - including issues related to seating - with sensitivity and without a scent of discrimination on the basis of religion, creed or sex, yet with an emphasis on flight safety."

The statement from El Al calls the partition incident noted on Channel 2 an "anomaly that does not conform to the airline's in-flight service regulations." It stresses that "at no time whatsoever was passenger security compromised" as a result of the partitions.

'Airlines give in to calls for gender segragation due to dependence on ultra-Orthodox patronage'
Israeli sociologist Menachem Friedman says struggling carriers like El Al are increasingly dependent on large demographic groups like the ultra-Orthodox.
By Mordechai I. Twersky • Ha’aretz

A prominent Israeli sociologist who has studied the ultra-Orthodox community for nearly 40 years says incidents of Haredi men attempting to switch their airline seats with women is part of a larger trend transforming the Haredi community. It is a trend, he says, that also mirrors the growing dependency of struggling commercial entities on the patronage of large constituencies.

"Growing up, I don't remember there ever being a problem of sitting on a bus or in a taxi with women," recalls Bar-Ilan University Professor Emeritus Menachem Friedman, 75, who grew up in a semi-religious community in B'nei Brak - one that was vastly different from its present-day makeup. "In those days, if a man walked down the street and shielded his eyes from the image of a woman, he was thought to be crazy."

Friedman says he believes that today's Haredim are reacting, in part, to a "more liberal approach to dress codes among the non-religious that is becoming increasingly acceptable."

He has coined the term "Scholar Society" to illustrate what he sees as an ascendant, post-1950s Haredi community shaped by the modern welfare state and dotted by a preponderance of yeshivas and kollels (yeshivas for married men ).

Whereas the older generation of Haredim relied on the more moderate halakhic edicts of its decisors, the current generation of yeshiva-educated followers of charismatic rabbis has led to the "formulation and intensification of traditional particularistic frameworks within Haredi society," argues Friedman.

He notes a Haredi community that has grown exponentially and vastly increased its political power, to the point of being confident enough to wield its influence on companies like El Al - and, more recently, Israel's Egged bus lines - with demands of gender segregation, according to Friedman.

Struggling carriers like El Al - which this week posted a quarterly net loss of $7.8 million, compared with a profit of $16.3 million in the last three months of 2010 - are becoming increasingly dependent on large demographic groups like the Haredim, despite the high unemployment and poverty rates in its ranks, Friedman contends.

"El Al has an interest in doing whatever is must to satisfy and preserve this group," says Friedman, who sees a future punctuated by "more friction, tension, and outbursts between secular and religious Jews."

"I don't know who will give ground first," says Friedman, "but at some point El Al will have to choose whether or not to concede to the Haredim."