It appears that the attack that killed four Jews at a Jewish school in Toulouse, France early today was carried out by the same man or group that attacked French elite combat soldiers last week, all of whom were of Arab or African origin. 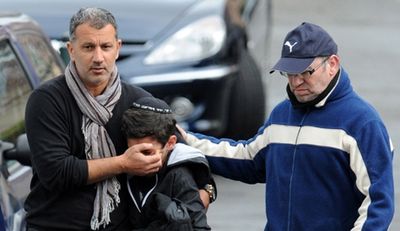 (CBS/AP) TOULOUSE, France - The shooting deaths of four people, including three children, by a gunman outside a Jewish school in the French city of Toulouse has been linked to two deadly attacks in the same region last week that killed three French paratroopers and left another seriously injured.

Investigators said Monday that forensic tests have shown the same weapon was used in all three attacks. The motive is unclear, but the targets all have been ethnic minorities.

A 30-year-old rabbi and his 3-year-old and 6-year-old sons were killed in Monday's attack, just before classes started at the Ozar Hatorah school, a junior high and high school in a quiet residential neighborhood, Toulouse Prosecutor Michel Valet said. Witnesses said the man worked at the school.

Police identified the fourth victim as the 10-year-old daughter of the school director. A 17-year-old was critically injured.

"He shot at everything he had in front of him, children and adults," Valet said. "The children were chased inside the school."

Witnesses say shooter was not random but took aim at victims and chased some into schoolyard, reports CBS Radio News correspondent Elaine Cobbe. Investigators are examining footage from a surveillance camera in the school for any clues.

French President Nicolas Sarkozy denounced "the savagery" of Monday's attack on a school, and vowed to find the killer or killers.

Interior Ministry spokesman Pierre-Henry Brandet told The Associated Press that the suspect in Monday's school shootings made his getaway on a dark-colored scooter — just as the assailant or assailants did in the two shootings last week.

The school targeted Monday, behind a high white wall with few external markings, was cordoned off by police, who then escorted other children out as forensics police combed the scene.

One officer held a distraught girl, her face in her hands. A mother and son wearing a yarmulke walked away from the site, their faces visibly pained. A video camera was visible at the school's entrance.

"The drama occurred a bit before 8 a.m. A man arrived in front of the school on a motorcycle or scooter," Valet said, adding that the man got off his scooter outside the school and opened fire.

The prosecutor said the suspect probably used two weapons, including one of a large caliber.

Forensic analysis showed the same weapon was used in the shootings in Montauban and Toulouse.

A man who lives near the school said he spoke with the father just before he was shot and killed.

"I said "Bonjour" to him like normal," said the 29-year-old, asking to be identified only by his first name Baroukh.

"Then he went out into the school entrance. I heard the shots and I turned around and saw him on the ground. He looked dead. But I didn't have much time to see who did it because I panicked and started running away."

"It's a day of national tragedy," Sarkozy said after arriving. "The barbary, the savagery, the cruelty cannot win. Hate cannot win. The nation is much stronger."

In Jerusalem, Israeli Defense Minister Ehud Barak said "whether it was a terror attack or a hate crime, the loss of life is unacceptable."

Einat Wilf, an Israeli legislator from the Independence Party, said legislators were being briefed on the shooting.

Special prayers were being offered Monday at Notre Dame Cathedral in Paris.

It appears that the attack was carried out by the same man or group that attacked French elite combat soldiers last week, all of whom were of Arab or African origin.

In other words, this killer seems to be targeting what he considers to be foreign elements he believes are  polluting French culture.

This killer could be a neo-Nazi or white supremacist. Or he might simply be crazy.

Whatever he is, it is almost certain he subscribes to a type of extremism. It may be based in religion or it may be secular. But it is certainly fundamentalist, viewing the world in sharply drawn areas of black or white with no gray, no nuance, no doubt or uncertainty in between.

Fundamentalism is our enemy in Iran and Afghanistan, in the neo-Nazi skinhead groups that plague Central and Eastern Europe, in Hamas and Islamic Jihad, and increasingly, in young West Bank settlers and extremist haredi groups.

Hallmarks of fundamentalism is deciding what is true first and amassing the facts to support that decision afterward, and disregarding facts and evidence that disproves a group's declared truths.

And that is exactly what we need to fight.

It appears that the attack that killed four Jews at a Jewish school in Toulouse, France early today was carried out by the same man or group that attacked French elite combat soldiers last week, all of whom were of Arab or African origin.