Stephanie Rose said Wednesday she was the deputy chief of the criminal division with the U.S. Attorney’s Office at the time of the raid. She said that title may be misleading because she was overseeing the “guns and drugs” cases. Her role in Postville was limited and she wasn’t in charge of the operation. She spent two weeks in Waterloo when the prosecutions took place. She acted as a liaison between the court, defense attorneys, probation, the clerk’s office and others. Most of her time was spent on the phone coordinating, she said. 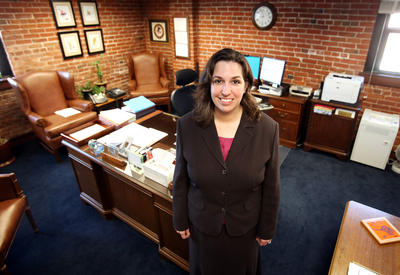 Federal judge nominee Stephanie Rose stressed today that she wasn’t the lead decision-maker in the Postville raid case, an unprecedented and controversial mass prosecution that has never been repeated.

Rose said she was the deputy criminal chief in the prosecutor’s office, but there were others above her in the chain of command, including Matt Dummermuth, the U.S. Attorney for the Northern District of Iowa at the time.

Rose, 39, is currently under consideration to be the next federal judge in the Southern District of Iowa – a lifetime position.

During a hearing on her nomination today, Rose said she wanted to clarify that she was simply a liaison between the prosecutor’s office and the defense attorneys, court clerks, federal agents and others tied to the prosecution of about 300 illegal immigrant meatpacking plant workers in 2008.

“My role was really as a key problem solver,” she told four senators on the U.S. Senate Judiciary Committee in Washington, D.C. on today.

Many of the Agriprocessors workers were charged with identity theft, a heavy-duty felony. Critics have blasted the way the defendants were sent assembly-line style through the court system, in such a rapid fashion that the workers had little chance to consider their options.

Within 10 days of the arrests, the judge [sic] had taken plea deals for 297 people. Eventually, 306 pleaded guilty. Most ended up with charges of using false immigration documents to obtain work, and were sentenced to five months in prison.

“All 306 who we charged during those days did plead guilty. There was not a single trial held,” Rose said.

There has never been a case where so many workers from a workplace raid were prosecuted en masse – and the justice department has not repeated it since.

Asked what involvement Rose had with the planning of the raid, or with the plea agreements, Rose answered: “None.”

Rose said the major decisions about charges and the provisions of the plea agreements were made by her superiors, with approval from the U.S. Department of Justice.

Republican U.S. Sen. Chuck Grassley of Iowa, the ranking member on the judiciary committee, said he wasn’t trying to play gotcha, but asked her 10 questions about the case.

Asked about the defendants’ accommodations during the fast-track prosecution, Rose said they were “everything you would and should expect.”

“I have every reason to believe they were treated well throughout the entire time they were in our custody,” Rose said. “Every person I saw had a cot, they had a blanket, they had clean clothing, they had meals catered by Hy-Vee. They had televisions, they had games. I never saw them playing the games, but they were sitting there.”

If confirmed, she would be the first female U.S. district judge in Iowa’s Southern District, which is based in Des Moines.

Next, she will need to answer questions to answer from the senators who weren’t able to make the hearing today. If she clears the committee, her nomination goes to the full Senate for a vote.

U.S. Attorney Stephanie Rose explained her role in the 2008 Postville immigration raid during a U.S. Senate Judiciary Committee hearing Wednesday for her and others who have been nominated as federal judges.

Rose was nominated by President Barack Obama last month for the federal bench in the Southern District. If confirmed, she will replace Chief Judge Robert Pratt, who will retire July 1.

Sen. Chuck Grassley (R-Iowa) and other senators on the committee asked more brief, general questions of all four of the nominees including how they would handle conflict of interest or recusal standards, how being a prosecutor affects their role as a federal judge and how would they ensure every person is treated fairly.

Grassley, chairman of the committee, said he had a lengthy question, about 10 points, for Rose regarding the Postville raid and her role to clear up any misconceptions and submit it into the record for this hearing.

Rose has been criticized for the way the raid was handled or for the fast track prosecution of the more than 350 illegal immigrants, who worked at Agriprocessors and were charged in the raid.

Rose said Wednesday she was the deputy chief of the criminal division with the U.S. Attorney’s Office at the time of the raid. She said that title may be misleading because she was overseeing the “guns and drugs” cases. Her role in Postville was limited and she wasn’t in charge of the operation. She spent two weeks in Waterloo when the prosecutions took place. She acted as a liaison between the court, defense attorneys, probation, the clerk’s office and others.

Most of her time was spent on the phone coordinating, she said.

“I think I had three phones at the time and I was looking at my phone records from then and had 687 minutes in a 12 day period,” Rose said.

Rose, who wasn’t the U.S. Attorney at the time, said her role was mostly as a problem solver. She wasn’t involved in the planning of the raid, the pre-raid ratified plea agreements or the prosecutions themselves. Most of the decision-making was coming from the U.S. Department of Justice who had to approve the fast track prosecutions.

Sen. Tom Harkin also gave some opening remarks regarding Rose and why he recommended her for the position. Harkin said he reviewed an unusually strong field of candidates for the position and Rose stood out as a person of “truly outstanding intellect and character.”

Harkin said Rose is a “superb” attorney, and she has a reputation as someone “unfailingly fair and ethical. It is no surprise she enjoys wide, bipartisan support from the Iowa legal community.”

Rose, 39, of Center Point, has worked in the U.S. Attorney’s Office since graduating from law school, one of the youngest hired at the time. She worked her way up and was appointed as U.S. Attorney in 2009.

Rose was praised by a large group of defense attorneys who worked on the Postville raid cases. They say Rose went beyond the call of duty to help them and help the detainees, and all evidence shows Rose was perhaps the only person in the US Attorney's office at that time who behaved kindly toward them.

That hasn't stopped critics – especially a Florida-based translator who has for four years repeatedly misrepresented facts – from trying to smear her. In this translator's twisted mind, Rose should have quit rather than do her job – even though the job she did made life easier for the detainees, who would have been imprisoned and then deported no matter who held Rose's job.

All of these detainees were technically criminals who violated, at minimum, US immigration law. Unless you want to say that US Attorneys shouldn't enforce those laws, and that they should not enforce identity theft laws, you have no basis to complain about Rose.

The mass prosecutions were a Bush Administration idea, formulated, ordered and implemented by Republican appointees.

Rose was the lone voice of sanity.

Only a fool or a vengeful bigot would seek to punish her for what others did.

And that's why the opposition to Rose's judicial appointment is led by exactly that, and is supported by Chabad and haredi supporters of Sholom Rubashkin who don't know or care about the facts, but do care about taking revenge on anyone who worked in that office, even if the person they're attacking had nothing much to do with Sholom Rubashkin's case.

Stephanie Rose said Wednesday she was the deputy chief of the criminal division with the U.S. Attorney’s Office at the time of the raid. She said that title may be misleading because she was overseeing the “guns and drugs” cases. Her role in Postville was limited and she wasn’t in charge of the operation. She spent two weeks in Waterloo when the prosecutions took place. She acted as a liaison between the court, defense attorneys, probation, the clerk’s office and others. Most of her time was spent on the phone coordinating, she said.