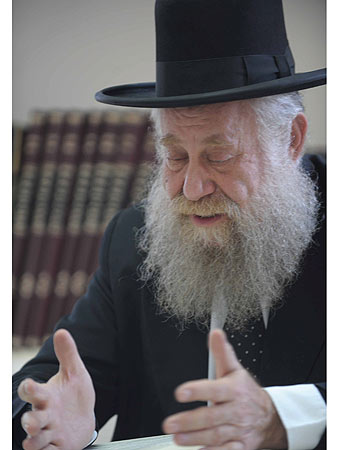 Ashdod chief rabbi: Siren sounds during prayer? Don't move
Rabbi Yosef Sheinin rules that when siren is sounded during reciting of Shemoneh Esrei prayer you must not stop praying in order to rush to shelter
Kobi Nahshoni • Ynet

A relative calm may have returned to the southern communities but Home Front Command directives for emergency situations remain unchanged. Yet apparently Ashdod's Chief Ashkenazi Rabbi, Yosef Sheinin has his own directives.

Speaking on Sunday, the rabbi ruled that when a siren is sounded during the reciting of the Shemoneh Esrei prayer (a prayer recited quietly while standing) the person reciting the prayer must not stop praying in order to rush to a fortified space or shelter.

He based his ruling on halachic reasoning: The Iron Dome system provides the worshipper with immediate protection.

In an interview with a local radio station the Ashdod rabbi was asked what the ruling was for a man who hears a siren mid-prayer while reciting the Shemoneh Esrei prayer.

"The halacha rules that if a snake is wrapped around a man's heels while he is reciting the Shemoneh Esrei prayer, he mustn't move. Yet if a scorpion is wrapped around his heels – he must run, for a scorpion bites whereas a snake doesn't bite unless harmed," the rabbi explained.

"It is my opinion that the Iron Dome transforms the danger from scorpion to snake which is why today, if a person is reciting the Shemoneh Esrei prayer and the alarm is sounded – he must continue praying."

He stressed that in the pre-Iron Dome days he instructed people to "get up and run to a fortified space."

Rabbi Sheinin added that "a man who doesn't stand during the Shemoneh Esrei prayer must certainly run to a fortified space due to 'and you shall diligently protect your souls.'

"But when you are standing in the middle of reciting the Shemoneh Esrei prayer, we have the two examples in the halacha and I think that today we are in the snake (situation) after it has been proven that the Iron Dome is indeed a great defense."

What the rabbi is saying is that the danger from the missiles has been reduced enough by the Iron Dome missile defense system for him to say that God will protect those praying Shemoneh Esrei. But according to him, a person who prays the Shemoneh Esrei sitting down (due to illness or weakness or advanced age or even sloth) does not merit that special protection, and since he isn't standing anyway, he can get up and run to the bomb shelter.

This makes no halakhic or rational sense.

The snakes halakha talks about normally won't bite if the man does not move – if he stands perfectly still like a pillar – which was how the sages of the Mishna prayed the Shemoneh Esrei, which is what this halakha is based on. The danger the snake poses comes from what might happen when the man moves or tries to remove the snake. When the Mishna says keep praying, it is telling a person in that situation that the danger to him is greater if he tries to run or shake the snake off or pull it off, and therefore he should remain perfectly still like a pillar and keep silently praying, despite the natural fear almost all of us would feel in that situation.

On the other hand,  a scorpion will sting even if a man stands perfectly still. Therefore, removing the scorpion and then running away from it is the safest thing to do.

A missile's function is to kill, maim and destroy. Therefore incoming missiles must always be considered life-threatening, even if the Iron Dome destroys 90% of them or even 99% of them. A missile that does get through the missile defense system is a "scorpion wrapped around the heels" of everyone in its path.

What reduced the number of missiles landing in Ashkelon isn't a change in the nature of the missiles from scorpions to snakes.

What reduced the number of missiles landing in Ashkelon can be compared to erecting better fences and barriers to keep scorpions and snakes out of the city.

We don't know which of those 100 or which of those 1000 will break through. And because the time between a missile breaking through the missile defense system and it striking Israeli soil is only a few seconds, there is no way to wait for a missle to break through before judging it to be a scorpion and running for a bomb shelter. And therefore every missile fired at Israel must be presumed to be a grievous danger to life and limb.

Standing still as a pillar and praying silently does not reduce the danger posed by an incoming missile – but running to the nearest bomb shelter does.

Rabbi Sheinin should have known this. But he didn't, and the ruling he issued endangers thousands of lives. He must immediately retract it.