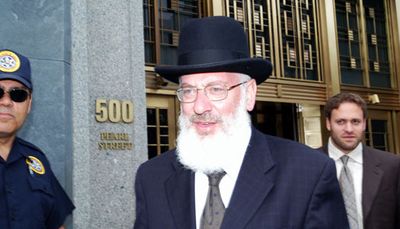 This holy man never had a prayer at beating the rap.

A Manhattan appeals court today upheld the conviction of a crooked Brooklyn rabbi for trying to shake down billionaire Steve Cohen's hedge fund with phony allegations of inside trading.

The U.S. Second Circuit Court of Appeals unanimously rejected Rabbi Milton Balkany's claim that jurors should have been allowed to consider if he was entrapped, saying "Balkany failed to present any evidence that the government 'induced' him to commit the crimes charged."

"As the government notes, the evidence with respect to the extortion, wire fraud and blackmail counts established that it was Balkany who made the first unsolicited call to SAC (Capital Advisers), claiming that he had damaging information that Cohen had engaged in insider trading which he urgently wanted to share," the ruling says.

The unsigned decision by Judges Amalya Kearse, John Walker Jr. and Gerard Lynch also shot down Balkany's argument that he was convicted of making a false statement through a "perjury trap" set by the feds, noting that "Balkany was under no obligation to speak to the federal investigator to whom he lied."

Balkany, 65, is currently serving four years in a federal slammer in Miami for trying to scam $4 million in donations to his financially strapped Bais Yaakov Jewish girls school.

"A good man -- a distinguished educator -- exercised poor judgment and is now paying a heavy price," he added.

The U.S. Court of Appeals in Manhattan today rejected Balkany’s claim that he was induced to commit the crime by the firm’s lawyer, Martin Klotz, and was barred from putting on a defense that he had been entrapped by the lawyer working on behalf of prosecutors.

Balkany was convicted of extortion and blackmail by a jury in November 2010 for threatening to disclose insider trading by SAC unless $4 million was paid to charities he operated. There was no evidence at the trial that he had any such evidence. He was sentenced to four years in prison.

“The District Court did not err in refusing to give an entrapment charge because Balkany failed to present any evidence that the government ‘induced’ him to commit the crimes charged,” a panel of judges on the Manhattan-based appeals said today.

“The evidence with respect to the extortion, wire fraud, and blackmail counts established that it was Balkany who first made an unsolicited call to SAC,” the panel said.

Paul Shechtman, a lawyer for Balkany, didn’t immediately reply to a voice-mail message left at his office seeking comment on the decision. Jonathan Gasthalter, a spokesman for SAC, declined to comment.

Prosecutors said the rabbi, who was dean of the Bais Yaakov day school in the Borough Park neighborhood of Brooklyn, told the Stamford, Connecticut-based fund that a federal prisoner in Otisville, New York, to whom he was a spiritual adviser, had described the purported insider-trading scheme to him.

Balkany called prosecutors in the Manhattan U.S. Attorney’s Office in an attempt to put pressure on SAC to further his scheme and cause prosecutors to interview the prisoner, testimony showed.

Witnesses testified that Balkany told the lawyer for SAC that the inmate would keep quiet about illegal in 2004 and 2005 if it paid his school and another $2 million each.

Klotz instead recorded his phone calls and meetings with Balkany, who was arrested after taking two checks from SAC totaling $3.25 million.

Balkany told an SAC official at the time that the inmate wouldn’t talk to authorities at a meeting scheduled for the following day. No such meeting was planned, according to the government.