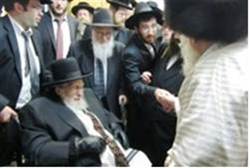 He is known outside the haredi world and by haredi child sex abuse survivors for issuing a halakhic ruling that prohibited victims of Rabbi Yehuda Kolko to report Kolko's pedophilia to police or the media. Scheinberg based his ruling on the fact that Kolko did not penetrate his young victims. Schienberg ruled that lack of penetration meant that no actual sexual act had taken place according to Torah law. He also dismissed testimony from minors and ruled that going to police or the media violated the halakhic prohibitions of mesirah, informing, and lashon harah, gossip and talebearing.

Two decades later, when a former student of Kolko's sued the yeshiva Kolko taught in, Torah Temimah, and New York Magaize asked Torah Temimah about the ruling, the yeshiva denied Scheinberg's role in protecting Kolko. But its rosh yeshiva, Lipa Margulies, and Scheinberg both refused to comment or to answer the reporter's questions about the ruling.

But Torah Temimah also insisted it could not fire Kolko because of Scheinberg's ruling that concluded that Kolko was "omed b'cheskoso" (i.e., Kolko stands on his [good] reputation) and therefore deemed innocent.

Several years after that, when the Child Victims Act, which would have allowed lawsuits to be filed against individuals like Scheinberg and yeshivas like Torah Temimah, looked like it would pass into law, Scheinberg's son denied his father had made the rulings or had acted in the role of protector to Kolko and Torah Temimah.

Scheinberg wore dozens of arba kanfot garments – tzitzit, the four-cornered fringed undergarment worn by Orthodox (and some non-Orthodox) Jews – at the same time, making him appear to be a much larger man than he really was. Scheinberg did this as a tikkun, an act meant to repair a spiritual lack, allegedly related to the Holocaust.

He will be buried in Jerusalem.

Update 9:35 pm CDT – A person intimately familiar with the Kolko case emails that:

Torah Temimah does not deny Scheinberg's role in protecting. In fact, they insist they could not fire Kolko because of Scheinberg's ruling that Kolko was "omed b'cheskoso" and therefore deemed innocent.

This post has now been updated to reflect that.