A 22-year-old New Square man surrendered this morning to face charges of setting fire to a car owned by Aron Rottenberg, the village resident set on fire last year by another young employee of the Skvere Rebbe. 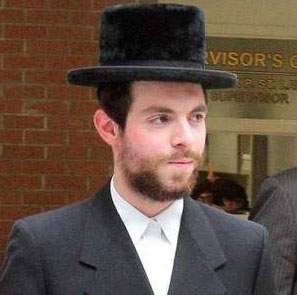 RAMAPO — A 22-year-old New Square man surrendered this morning to face charges of setting fire to a car owned by Aron Rottenberg, the village resident set on fire last year by another young follower of the grand rebbe for refusing to pray in the village.

Aron Fromowitz stood before Ramapo Justice Alan Simon and pleaded not guilty through his lawyer, Gerard Damiani of New City, to a felony charge of third-degree arson and second-degree criminal mischief, a misdemeanor. He was ordered to return to New Square Justice Court on March 26. He was then taken by Ramapo police to be fingerprinted and processed. He was to be released on $5,000 bail.

Fromowitz, who reportedly works for the grand rebbe’s kitchen and once prayed with Rottenberg, is accused of setting fire to the rear bumper of Rottenberg’s 2003 Mazda on Thursday night.

Fromowitz had been drinking and celebrating the Jewish festival of freedom Purim when he visited the Jefferson Avenue house of Rottenberg’s mother in the Hasidic Jewish village.

Rottenberg counseled Fromowitz about the dangers of drinking when the younger man became upset and stormed from the house, cursing Rottenberg with his middle finger, police and family members said.

Fromowitz came back into the house to make additional comments, only to leave again. Flames started burning Rottenberg’s car minutes later. The car was parked outside the house.

Rottenberg has been in the eye of the dissident storm in New Square for leading a contingent of men who refused to pray in New Square’s only synagogue, defying the desire of Grand Rebbe David Twersky.

Protesters marched outside Rottenberg’s Truman Avenue house in late 2010, with the windows of his car and house broken, his plumbing business boycotted and his daughter kicked out of the rabbi’s school. Other families also were harassed by young enforcers for the religious hierarchy.

Rottenberg suffered third-degree burns across 50 percent of his body at about 4 a.m. May 22 when he confronted a follower of the grand rebbe. He spent months in the hospital, undergoing skin graft surgery.

Shaul Spitzer, 18, ignited a homemade incediary device when confronted by Rottenberg after tossing a similar one onto the family’s back porch. Spitzer, who was a butler and lived in Twersky’s house, has since pleaded guilty to first-degree assault and faces up to 10 years in state prison when sentenced April 17 by state Supreme Court Justice William A. Kelly.

Rottenberg settled a lawsuit against Twersky and Spitzer for $2 million with promises from the religious leadership he and his family would be left in peace and allowed to sell their home and leave the community.

Rottenberg said on video that the fire started a minute after Fromowitz left Rottenberg.

And that is significant, because – despite the apparent failure of police and the D.A. to deal with it –  this shows that the fire was probably premeditated.

A 22-year-old New Square man surrendered this morning to face charges of setting fire to a car owned by Aron Rottenberg, the village resident set on fire last year by another young employee of the Skvere Rebbe.