The Voice of Justice will be hosting its second annual model pre-Passover Freedom Seder to in support of and in solidarity with survivors and advocates of domestic and sex abuse. 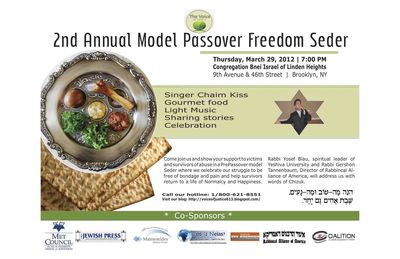 The Voice of Justice is proud to announce that we will be hosting our second annual model pre-Passover Freedom Seder to in support of solidarity with survivors and advocates of domestic and sex abuse.
The Freedom Seder will be held on THURSDAY, MARCH 29, 2012 at 7:00 PM at CONGREGATION B'NAI ISRAEL OF LINDEN HEIGHTS, 4502 9th Avenue in Boro Park, Brooklyn, New York.
The Freedom Seder will be a celebration of joy and hope for survivors as the community moves forward and will never let them down; providing them with every means of support, emotional and financial, so that all survivors can get on with their lives and achieve closure.
In each generation there is a pharaoh, there is that evil and there is that Moses who fights for freedom for all. In every generation we have an opportunity for attaining freedom as did the ancient Jews  by leaving the tyranical government of the Egyptians. Egypt was a place that had chains around our community, they constrained the people from growth. Pharaoh’s was the voice that prevented them from escaping to freedom. Moses was the liberator, the infinite force deep within and who had the powerful drive to break us out from bondage to deliver us to freedom; but freedom and the promise land are not elements that lie in wait, they are our own achievements which we can create at any moment and any time simply by saying enough is enough and breaking away, free from all the pain and all the suffering that we have endured.
This Passover Seder sponsored by the Voice of Justice will be a celebration of our fight for freedom. A fight of freedom that shines around the world as we struggle with the issues of society that hurt our children and must be stopped.
This year's Voice of Justice Seder will have a wonderful program  led by Rabbi Yosef Blau and Rabbi Gershon Tannenbaum as well as the great lengdary singer Chaim Kiss, who will honor our presence at the Seder table with tradition, music, songs and messages of hope.

The Voice of justice has been working with survivors for the past 5 years providing support services which include  a 24 hot hotline,food pantry,safe house and  full educational programs to help the survivors return to a life of normalcy

As advocates and for survivors, we will never give up the fight to tear down the wall of silence.
Wishing all our friends around the world a very
SWEET AND HAPPY PASSOVER!!
SEDER IS CO-SPONSORED BY MET COUNCIL,MAIMONIDIES HOSPITAL,THE JEWISH PRESS,RABBINICAL COUNCIL OF AMERICA,COALITION OF JEWISH ADVOCATES FOR CHILDREN

The Voice of Justice will be hosting its second annual model pre-Passover Freedom Seder to in support of and in solidarity with survivors and advocates of domestic and sex abuse.