What seems like a regular yeshiva is actually a special care program that uses Torah learning to rehabilitate the mentally ill and help them rejoin normative society. It is named for a synagogue in ancient Babylonia, made of stones from the Jerusalem Temple. 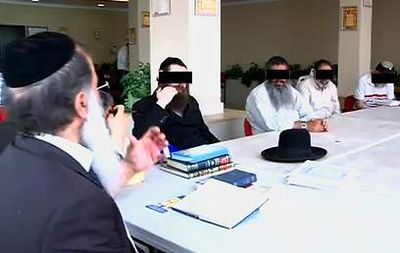 Moshe shut himself up in his home for four years. At the age of 18 he went through a mental crisis, left the haredi yeshiva he was studying at, went into his home in Bnei Brak and refused to come out. His parents did not know what to do with him.

They were worried about the stigma the family would have to bear. They also had no knowledge of programs suitable for a haredi yeshiva boy suffering from mental problems. Then they heard about the Shaf Yativ yeshiva and for the first time, sought help.

The Shaf Yativ yeshiva opened five years ago – a yeshiva for religious men with mental health problems. What seems like a regular yeshiva is actually a special care program that uses Torah learning to rehabilitate the mentally ill and help them rejoin normative society. It is named for a Synagogue in ancient Babel, made of stones from the Temple .

"A mental health start up," is how Rabbi Guy Avihod calls his life's work. Rabbi Avihod who is the head of the yeshiva says that "the yeshiva got going completely by accident. At a lesson given by Rabbi Mordechai Eliyahu I met Udi Marili who told me that he works at the Health Ministry with the mentally ill, trying to find them employment.

"Because he's religious, people always refer religious people to him and when he asks him how it's going – he always got the impression they weren't enthusiastic about their jobs and they would explain the setting wasn't right for them. They wanted to be treated with dignity; they wanted to feel that they could do more."

Marili and Avihod reached the conclusion that the way to rehabilitate religious mentally ill men was in their own socio-cultural environment." The majority of rehabilitation programs center around employment," said Rabbi Avihod, "but for anyone who has grown up in an environment of torah learning, rehabilitation must be defined differently."

"They can't seem to find themselves within the framework of existing programs. They feel rejected. In order to help them move forward you need an attitude that respects their culture.

"If you want to help someone, you need to do it from the place they're in you need to reach out to them not drag them out. After we understood that, we consulted with rabbis and psychologists; no one knew what to do with our idea."

The yeshiva opened by Rabbi Avihod and Marili started with six students, today it numbers some 100 yeshiva students. One branch operates in Jerusalem, one in Ramat Gan (on the border with Bnei Brak) and a third is set to open in Rehovot.

The yeshiva receives funding from the National Insurance, the Health Ministry and private donors. The 'Beit Midrash' learning curriculum begins at 9:30 am and ends at 1:30 pm and includes organized classes, Chavruta (partner based) study and enrichment programs.

"Through the Chavruta an amazing thing happens," explains Rabbi Avihod. "When a person studies in a Chavruta he can't be passive. He can't disappear into his own private world. He must communicate and contribute, which is what gives them so much both socially and cognitively.

"In addition to the daily Beit Midrash each student has an individual rehabilitation program with an emphasis placed on his special needs. There are some (students) who we want to help move forward socially and others by taking responsibility. I don't want them staying in the yeshiva for years, I wan them to move forward, especially the younger students; that they be fulfilled, rehabilitated and move on in the real world.

"In contrast, the older students stay in the yeshiva for long periods of time because after being tossed and thrown from program to program they don't have the strength to start all over again. But we push all of them to try and find additional occupations.

"For example, go to classes and lectures. Since this isn't a regular yeshiva we also organize sports days and trips. For us, it is important to nurture them, because people who find life to be so hard sometimes lose their will."

The Shaf Yativ yeshiva might be one of its kind as it has a wide ranging variety of people, both in age, 20-50 as well as professional background: Professors side by side with rabbis and high-tech professionals as well as destitute laborers.

Rabbi Avihod regrets that one main problem remains unsolvable - the stigma. "People don't actually know what a mental problem is," he said. "They also don't know that there are so many people with mental problems.

"The majority get their impressions from the media after headlines are made by a tragedy carried out by a mentally ill person. But that isn't true for the average mentally ill person. People don't realize how close it is to them. One in four people will deal with a mental health problem at some stage in their lives."

What seems like a regular yeshiva is actually a special care program that uses Torah learning to rehabilitate the mentally ill and help them rejoin normative society. It is named for a synagogue in ancient Babylonia, made of stones from the Jerusalem Temple.