Is a photographer’s photo of a naked Ethiopian woman immersing in a mikva kosher? And was the photographer within his rights to post that naked picture online? 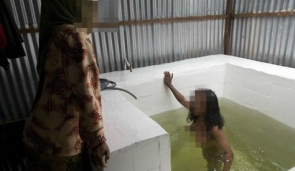 According to Ha’aretz, in 2006 Ziv Koren, the husband of Israeli fashion model Galit Gutman and an internationally known award winning Israeli photojournalist, went to Ethiopia and documented the immigration of a Falash Mura family to Israel. Koren shot pictures there, on the flight to Israel and at the absorption center where the family lived.

Why these points are important, and why it was also important for the Jewish Agency to stress that it was not in charge of that absorption center until 2011, will become apparent in a moment.

Koren considers himself to be a documentarian, and he works very hard to capture details and private moments others might miss or avoid.

One of the things Falash Mura do after arrival in Israel is formally convert to Judaism. Part of that conversion process involves immersing in a mikva, a ritual bath. And unlike the fundamentalist Christian baptisms you may have seen on television, immersion in a mikva is done without any clothes on.

But we do know that more than five years later, Koren posted one of those nude pictures on his Facebook page, sparking outrage. After waves of criticism and even threats, Koren removed the photograph yesterday morning, claiming he did so because he was worried about the woman’s security.

But Koren refused to apologize for taking the photograph or for posting it online, telling Ha’aretz that while these types of photographs might be provocative to some, they aren’t to others, and claiming that he took the photograph out of journalistic integrity.

"All the furious reactions and threats don't frighten me," Koren said. "I took the photo down after I understood that it could harm the woman. Let's put everything into proportion, we live in a democratic country where you can morally assess these things more than once. This whole thing kind of went out of control. I'm a documentarian whose whole life revolves around things that are on the edge."

"Respect for human beings is more important than any piece of art or documentation," a Jewish Agency spokesperson said in response.

Why Koren would think that posting a naked photograph online where millions of people could see it of a woman who had just been taken from a very primitive third world country to a modern first world state, who was almost certainly confused and struggling to adapt, and who almost certainly lacked the informed ability to consent, wouldn’t harm that woman is an open question that only Koren can answer.

Is a photographer’s photo of a naked Ethiopian woman immersing in a mikva kosher? And was the photographer within his rights to post that naked picture online?