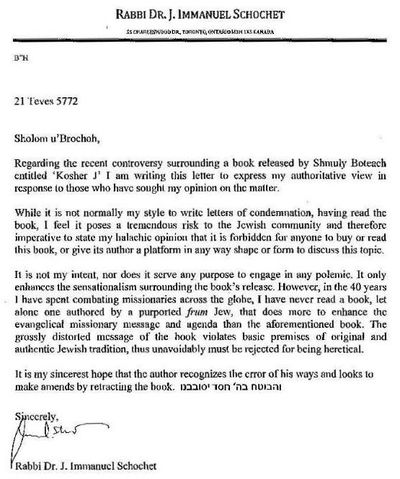 I believe Schochet has a son who is talked about as a possible cnadidtate for Chief Rabbi of England, a position Boteach wants, so to say Schochet has no reason to take down Boteach is false.

Further, there is nothing official Chabad would like more than to take down Boteach – who was fired by Chabad in England and who is a loose cannon and a royal pain in the ass to Chabad – and Schochet is a Chabadnik who is closely linked to Chabad's leadership.

I haven't read the book.

But I do know Boteach and I did see him 'deal' with the issue of Hebrew Christian missionaries a few days before he left America for Oxford to open the Chabad House there, and I don't doubt that Schochet's assessment of the book is probably very close to the truth.

I only wish that the Chabad shaliach I was working for then would have listened to me that day and tried to get Boteach's appointment blocked.

He didn't do that, however, not because he disagreed with me – he didn't. But trying to block Boteach's appointment would have meant questioning the Rebbe who had already blessed it. And as I've found out in spades since then, that just wasn't done.