The Chabad-affiliated owner-editor-publisher of the Atlanta Jewish Times, Andrew Adler, says Israel has three options to deal with Iran's nuclear ambitions. One of those options, he says, is a Mossad assassination of US President Barack Obama.

Adler has since apologized for this monstrosity. He also claims he wrote it simply to get reaction from his readers: 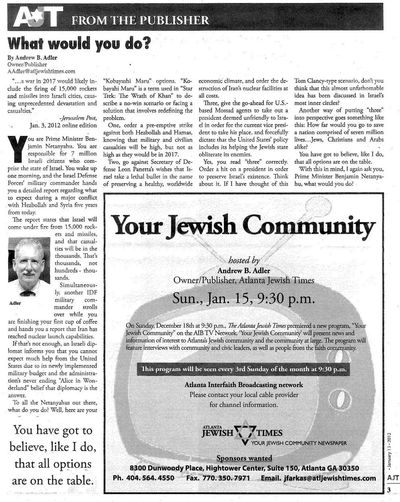 Adler's membership in Chabad and his apology is reported by the Forward:

…“Did I go too far? Yes. Do I regret it? Yes,” Adler told the Forward on Friday. “I should have thought about it twice and three times.”

Offering up a series of options that Israeli Prime Minister Benjamin Netanyahu might pursue, Adler writes that one choice would be to, “Take out a president deemed unfriendly to Israel.”

The publisher went on to forcefully reiterate his opinion: “Yes, you read … correctly. Order a hit on a president in order to preserve Israel’s existence. Think about it.”

“You have got to believe, like I do, that all options are on the table,” he wrote.…

Adler, who is a member of the Chabad Movement and has been active in the Atlanta Jewish community for years, bought the paper 2-1/2 years ago. It has a circulation of between 3,000 and 4,000…

This dangerous, moronic column was published the same week that Ami Magazine, a Brooklyn-based haredi publication, published an issue whose cover showed the White House draped in Nazi flags with a batallion of Nazi soldiers goosestepping in front of it. The caption? "The Return of Anti-Semitism." (Like Adler, Ami's publisher/editor Rabbi Yitzchok Frankfurter also apologized for his poor judgement – once the press started asking him about it.)

This type of Obama=Nazi, Obama hates Israel, Obama is a Muslim who hates Israel, bizzaro talk is, unfortunately, common in Chabad and haredi communities.

Chabad views any trade of land for peace as heretical and an existential threat to Israel's existence. Add on top of that any acknowledgement by  a politician that Israel may not always be right abd you have a tinderbox waiting to ignite.

This same view has become common in haredi communities as more haredim have moved to the West Bank due to housing shortages in their home communities in Israel, and since Rabbi Schach, who was the Israeli haredi leader for many years, died. Rabbi Schach viewed ceding land for peace as a justifiable option Israel might take. This is much less true for his successor.

At any rate, I don't think Adler pulled the idea of killing President Obama out of thin air.

I think Adler heard the kind of talk many of us heard in shul just before the Oslo Accords were signed – talk that eventually led to Prime Minister Yitzhak Rabin's assassination – to eleiminate the existential threat, the leader most associated with it had to be killed.

I'm sad to say that 18 years ago, I participated in some of those discussions and my opinion was no less malignant than the others.

In large part because fundamentalism does not allow for compromise or for gray areas. All things become black or white, and all decisions of existential import must conform with the fundamentalist doctrine.

That Oslo or Obama's policies pose existential threats to Israel's existence was decided by fundamentalist leaders – in my case, the Lubavitcher Rebbe. What was left for the rest of us was to decide what we could do about it.

For most people in these groups, there isn't much they can or will actually do about these threats other than talk about them, pray about them and educate about them.

But for some – a small minority, to be sure – this talk, education and prayer leads to action, and some of those actions are violent.

It only took one such fundamentalist to assassinate Yitzhak Rabin and, as far as we know, only one actually got as far as trying to do that. Unfortunately, he was successful.

But there were many more on the edge, people who thought about doing it, who may have even planned doing it, but for whatever reason – cowardice; a moment of rational thought; or the understanding that a bullet once shot and once it finds it target cannot be undone, which required a level of absolute certainty and absolute faith the fundamentalist lacked – did not in the end pull the trigger.

What Adler's column and Ami Magazine's cover signify is not that there are hundreds of thousands of haredim who are actively trying to or planning to assassinate President Obama.

What they signify is that process that might lead to this crime exists, and that within the walls of Chabad and haredi synagogues, yeshivas and organizations, there are people who think killing the president is a real option. And in that group of people are a few, perhaps only one, who might seriously try to do it.

That Adler and Ami Magazines editor/publisher Rabbi Yitzchok Frankfurter are irresponsible, reckless and foolish is clear.

In an ideal world, their publications would go out of business because no one would advertise in them or pay to read them.

But they are not the real danger.

The real danger is that lone fundamentalist assassin who has heard from his rabbis or read in Adler's paper that Obama's policies pose an existential threat to Israel's existence, and that one of the ways to deal with that terrible threat might be to kill the president.

This lone assassin cannot choose to attack Hamas and Hezboallah or attack Iran. He lacks the resources and the skill set to do so.

That is what makes what Adler and Ami did so dangerous.

We should all certainly strongly condemn Adler's column and Ami Magazine, and we should certainly stop buying Ami and/or the Atlanta Jewish Times or supporting them in any way.

But we also have to condemn the fundamentalism that created them and we must distance ourselves from it in evey way possible.

Doing otherwise encourages the extremism that could easily destroy us.

The Chabad-affiliated owner-editor-publisher of the Atlanta Jewish Times, Andrew Adler, says Israel has three options to deal with Iran's nuclear ambitions. One of those options, he says, is a Mossad assassination of US President Barack Obama.