« Exclusive: Is There A Backroom Deal In The New Square Arson/Attempted Murder Case? | Main | A Case Of Suspected Child Sex Abuse And Its Coverup At A Chabad Heder »

Exclusive: In Chabad's Central Synagogue, Charity Collectors Have To Pay To Play

Administrators known as gabbais are charging charity collectors and beggars $5 to beg inside Chabad's main synagogue at 770 Eastern Parkway in Brooklyn, New York. Those who do not pay are ejected, sometimes by police who are called in by the gabbais. 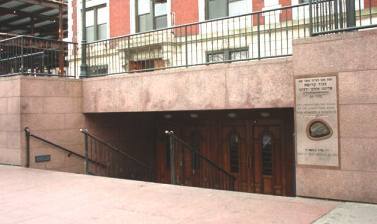 The entrance to Chabad's central synagogue located next to and underneath its world headquarters at 770 Eastern Parkway in the Crown Heights section of Brooklyn, New York.

Exclusive: In Chabad’s Main Synagogue, You Have To Pay To Play – Even If You Are Poor And Hungry And Are Begging For Money To Buy Food
Shmarya Rosenberg • Failedmessiah.com

You have to have money to make money, even when you're a beggar in Jewish Brooklyn.

Earlier today, I spoke with two charity collectors /beggars who say they were forced by Rabbi Avrohom Holtzberg, who is a gabbai (trustee/administrator) of Chabad's main synagogue at 770 Eastern Parkway in the Crown Heights section of Brooklyn, New York, to pay $5 each for permission to beg in the synagogue's lobby. Naming the two, who collect charity in the synagogue alongside what can be a dozen other collectors, would endanger them and could cause their access to the synagogue to be cut off entirely.

Jewish law permits begging in synagogues and at public events, including weddings – where traditionally a table of light food and desserts is set for beggars and other uninvited guests so that they can eat some food and join in the celebration.

In some locations, rabbis encourage their followers to restrict their donations to beggars who carry a letter signed by the local beit din, religious court, vouching for their need or that the collector is legitimately collecting funds for a legitimate Jewish organization. But there is no charge to receive this letter. [Sadly, this is no longer true. Please see the update below.]

The charity collectors also told me that Rabbi Hotzberg and another gabbai recently called police when several female beggars refused to pay the $5 fee. Police came and ejected the women. Holzberg threatened to do the same to collectors who had not paid their $5 per day fee today, the collectors told me.

Many, if not most, of these charity collectors are not Crown Heights residents or Chabad members.

Hasidic folklore has many stories about "holy beggars" and itinerant scholars whose mistreatment by the rich and powerful is sharply criticized.

Jewish law mandates giving food to a beggar who has asked you for food immediately – before completing prayers, studies, work or other tasks you may be involved in – citing a case where a beggar died because the person he asked for a piece of bread delayed a moment to complete another task.

Update 7:05 pm – I just spoke with a collector who told me that for the past 15 years or so, many cities' beit din or va'ad charges money to collectors for a letter that grants permission to the collectors to collect charity in their particular town or community. This can range from the Va'ad of Rabbonim of Queeens, which charges $25 for this service, to the Los Angeles Va'ad of Tzedaka (the name may have changed recently), which charges more than $100. The letters are good for 10 days to 3 weeks, depending on the city.

This collector also tells me that these va'ads, beit dins and rabbis often claim they are charging the collectors a "processing fee."

A few smaller communities still do not charge collectors.

Out of town collectors also often have pay drivers who guide them and take them to the homes and businesses of Jews who may donate. Many of those drivers take 1/3 of the money collected. Others charge per hour.

A collector who raises $1000 (all in checks)  over a two day period in a city that charges $100 for a permit letter and which encourages residents to make collectors' checks payable to the va'ad, beit din or organization issuing the letter returns home with very little money.

If the town does not have free accommodations for the collector, he'll have to pay for two nights in a motel or hotel in or near the jewish community. So subtract another $150 including tax.

If just over half goes to the charity the collector is rasing money for, that leaves $158 for the collector for two days work – $79 per day.

And if no one invites the collector to stay for a meal, the cost of buying prepared kosher food further cuts down earnings.

The collector also has to pay for transportation to the city and from it.

All this keeps many collectors poor and brings the carities they raise money for much less money than otherwise would be the case.

Exclusive: In Chabad's Central Synagogue, Charity Collectors Have To Pay To Play

Administrators known as gabbais are charging charity collectors and beggars $5 to beg inside Chabad's main synagogue at 770 Eastern Parkway in Brooklyn, New York. Those who do not pay are ejected, sometimes by police who are called in by the gabbais.