Israel's Immigration and Absorption Ministry has withheld a landmark research project documenting the murder of women in Israel's Ethiopian community. Only sections of the report, completed in 2009, are now coming to light – after Ethiopian Jews forced their release. 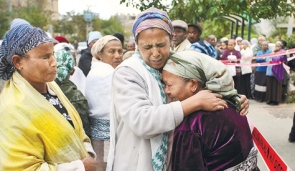 Immigration Ministry withheld information about murders in Israel's Ethiopian community
Ministry commissions study to understand circumstances leading to murders in the Ethiopian immigrant community in order to prevent them.
By Revital Blumenfeld • Ha’aretz

The Immigration and Absorption Ministry has withheld a landmark research project documenting the murder of women in Israel's Ethiopian community. Only sections of the report, completed in 2009, are now coming to light.

The research was conducted by Dr. Shalva Weil, an anthropologist who has researched Ethiopian Jewry for over 30 years. It offers a comprehensive profile of what Weil claims is the typical wife-killer, based on the examination of 16 such cases and extensive interviews with women and other family members who survived murder attempts.

The ministry had commissioned the study in an effort to understand the circumstances leading to murders in the Ethiopian immigrant community so that steps could be taken to prevent them.

But ministry officials refused to release the report after receiving it, claiming that it contained sensitive material that could violate people's privacy. Efforts by Weil and members of the Ethiopian immigrant community to release the report, in whole or in part, failed.

Sections of the report were released a few weeks ago in response to a request from a group of students of Ethiopian origin. The request cited the Freedom of Information Law as a basis for its release.

Large sections of the report were not released, however, including the sections describing the reasons for the murders.

Weil's research disputed the widely held notion that the murders were caused by gaps in schooling or employment. Eighty-one percent of both the murderers and victims were unschooled, and half were unemployed, according to the report.

Two-thirds of the women were stabbed to death. Many of the murderers who were researched by Weil attempted to commit suicide.

Weil noted that jealousy "was an extremely important element, with many of the murderers believing that their wives had cheated on them. Some members of the community attributed the violence to family norms carried over from Ethiopia. Many reported early arranged marriages, some to older men, that at times were forced on them. It seems that the families of the murderers were part of the cycle of violence."

According to the report, "Both the families of the murderer and of the victim were ... unsatisfied with the help they had been offered from outside sources, including welfare organizations and professionals."

Weil made several recommendations, including teaching immigrants when they were still in Ethiopia about family norms in Israel, including the right of a woman to defend herself.

Weil refused to speculate about why much of the report was still being kept under wraps.

"I can't speak for the people at the Absorption Ministry," she said. "I built a profile of the [typical] murderer, and there were a lot of surprises and unexpected findings."

"I'm very disappointed," Weil said. "I did all this to prevent the next murder. The profile could have helped the authorities."

The Immigrant Absorption Ministry said, "The research was needed for the ministry's internal needs and to establish policy. Much was learned from it. Because of it were are starting a new program to give immigrant couples tools to resolve domestic disputes."

Posted at 03:05 AM in Ethiopian Jews, Israel | Permalink

Israel's Immigration and Absorption Ministry has withheld a landmark research project documenting the murder of women in Israel's Ethiopian community. Only sections of the report, completed in 2009, are now coming to light – after Ethiopian Jews forced their release.