« Report: Chabad Rabbi Aquitted On Drug Trafficking Charges | Main | When It Comes To Haredim, It's Time To Forget The Future »

Pinto's now former chief aide allegedly raised more than $500,000 for the Reepublican in return for the promise of a Green Card. 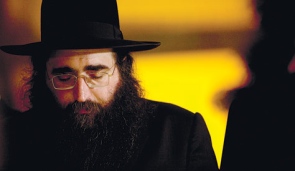 The New York Times has another report related to the alleged embezzlement of millions of dollars from the Shuva israel, Sefardi "mystic" and "kabbalist" Rabbi Yoshiyahu Yosef Pinto's charity.

The previous report was remarkably one-sided, and read almost like a press release for Pinto rather than a news report. It blamed the embezzlement of Ofer Biton, a former top aide to Pinto who is in the real estate development business in New York City, and on Ronn Torossian, the sockpuppeting head head of 5W PR.

But reporting by Ha'aretz the Forward (and again by the Forward) – completely ignored by the Times even though the documents supporting it were available to them – and FailedMessiah.com show that Pinto's charity and the Pintos themselves operate in questionable ways, and that the Pintos personally benefited from the charity's money. It bought the Pintos expensive jewelry, custom made clothes, and other items. Pinto's real estate holdings are also mired in controversy.

Now the Times has done a followup piece. It doesn't correct any of the omissions of its previous report. Instead, it claims that Biton – who is an Israeli citizen – illegally raised money with Michael Grimm as Grimm sought to win election to the US Congress in 2009 as a Republican representing Staten Island:

…Three of the rabbi’s followers said in separate interviews that Mr. Grimm or Mr. Biton told them that the campaign would find a way to accept donations that were over the legal limit, were given in cash or were given by foreigners without green cards.

“Every day, he used to call me, over and over,” the follower said.

The follower said he ignored the calls and did not give again.

A second follower recalled that Mr. Grimm came to his office in Manhattan to solicit a legal contribution. As he was handing over the check, the second follower said, Mr. Grimm confided in him that there were ways of working around the campaign rules.

“Grimm wanted you to supply the money, and if someone wants to give and cannot give, you have to find a friend to give it through,” the second follower recalled. “Let’s say someone is not legal to give because he’s not American. Grimm wants this guy, Joe A, to give the money to Joe B so Joe B can make the contribution to the campaign.”

A third follower said he picked up, at Mr. Biton’s behest, $25,000 for Mr. Grimm’s campaign from a single Israeli.

“I give the checks to Ofer, and he gives them to Michael,” the third follower said.

The third follower said the money donated by the Israeli was falsely listed in Mr. Grimm’s campaign disclosure records as having been given by at least five other people. The practice referred to — creating so-called straw donors — is illegal.

The rabbi’s followers who described what they said was questionable fund-raising by Mr. Grimm spoke only on the condition of anonymity, saying they did not want to become ensnared in the federal embezzlement inquiry into Mr. Biton.…

The donors interviewed by The Times said they gave money to the Grimm campaign because Mr. Biton told them that Rabbi Pinto wanted people in his congregation to do so.

The rabbi’s followers said Mr. Biton rounded up campaign money for Mr. Grimm in hopes that if Mr. Grimm won, he would help Mr. Biton obtain a green card.

It could not be determined whether Mr. Grimm did anything to help Mr. Biton with the immigration authorities.

Rabbi Pinto’s spokesman said the rabbi had met with Mr. Grimm but had not been aware at the time that Mr. Biton was raising money so aggressively for Mr. Grimm.…

It is not clear how Mr. Grimm met Mr. Biton, but the two men and a New York public relations executive named Ronn Torossian have often spent time together since Mr. Grimm embarked on his dark horse Congressional campaign.…

Mr. Grimm has received very few donations from Rabbi Pinto’s followers for his 2012 re-election campaign, the records show. The followers interviewed said they did not want to donate to the Grimm campaign after federal prosecutors began investigating the embezzlement accusations against Mr. Biton.

The Times doesn't press these Pinto followers or Pinto himself, and does nothing I can see to verify – or even to question – claims that Pinto – the "mystic," the "kabbalist" who "sees" peoples' futures – had no idea what was happening.

Anyone even remotely familiar with the cults that surround hasidic rebbes, Litvish gedolim, Sefardi kabbalists, and most other charismatic or dynastic religious leaders in all other religions worldwide knows that followers will lie for their leaders, will ignore their leaders' sins, and will be willfully blind to violations of secular law.

That the Times could write a piece like this and not even give a nod to this possibility here shows that these reporters and the editors they work for do not understand the world they're writing about.

Do this mean Biton and Torossian are innocent?

But it does mean that like the earlier report on Pinto done by the Times, this one has to be taken with a grain of salt.

Whatever Biton and Torossian did or did not do, there is much more to this story the Times has not reported.

Pinto's now former chief aide allegedly raised more than $500,000 for the Reepublican in return for the promise of a Green Card.