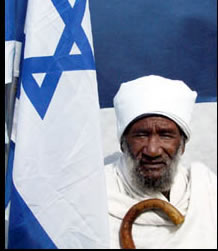 The effort has added to the sense of discrimination felt by Israel's 120,000 Ethiopian citizens. These sentiments boiled over this month after a group of landlords in the southern town of Kiryat Malachi refused to accept them as tenants, prompting a large rally planned for Wednesday across from Israel's parliament.

"We are just like all the other Jews. We don't have any other religion," said Kess Semai Elias, 42.

Descendants of the lost Israelite tribe of Dan, according to Jewish lore, Ethiopian Jews spent millennia isolated from the rest of the Jewish world. In most Jewish communities, the priesthood of the Bible was replaced by rabbis who emphasized text study and prayer. Ethiopia's Jewish kessoch continued the traditions of Biblical-era priests, sacrificing animals and collecting the first fruits of the harvest.

The two traditions diverged so much that the first trickle of Ethiopian Jewish immigrants to Israel were asked to undergo a quickened conversion ceremony to appease rabbis who were dubious about their religious pedigree.

When Israeli clandestine operations rescued large groups of Ethiopian Jews from war and famine in the 1980s and early 1990s, a rabbinic consensus was reached and the newcomers did not have to convert – except for a group known as the Falash Mura, whose ancestors were forcibly converted to Christianity generations before.

The 58 kessoch who arrived in Israel in those early days maintained their leadership role in the Ethiopian Jewish community, and in 1992 successfully lobbied the Israeli government to grant them salaries and status similar to those of government rabbis. But as the aging clergy began ordaining a new generation of kessoch over the past decade, and those new leaders also wanted recognition, Israel's rabbinate objected.

The ministry would finally implement a 2010 government resolution to recognize 13 of them and give them state salaries. But Israel's state rabbis made it very clear to the new kessoch: They would be the last.

"It's for the best," said Rabbi Yosef Hadana, 63, of the Israeli rabbinate.

Himself the son of a respected kess, Hadana long ago traded the shash, the white turban of his father's tradition, for the black suit and fedora of ultra-Orthodox Jews.

"After 2,500 years of isolation from the nation of Israel, we have returned. Now we need to find a way to be one people," Rabbi Hadana said.

Hadana says he holds great respect for the kessoch. They were the ones who once spun tales of Jerusalem's splendor at evening storytelling sessions, keeping alive the Ethiopian Jews' religious tradition. But anyone in Israel who wants to continue that tradition, he said, must get rabbinic training. Streamlining their religious practice can help integrate Ethiopian immigrants into Israeli society, he said.

Ethiopian-Israelis have long struggled in Israel, with literacy rates relatively low, the culture gap wide and rates of poverty and domestic violence well above the national average.

Many of the older generation work menial jobs, men as security guards and women as cleaners. Their children, most of whom grew up in Israel's Orthodox Jewish religious schools, speak fluent Hebrew, serve in the army alongside native Israelis and are increasingly studying engineering and sciences in Israel's universities. Despite these gains, the younger generation is still struggling compared to other Israelis.

The immigrants have also long complained of discrimination. In the late 90s it was discovered that Israel's health services were throwing out Ethiopian-Israelis' blood donations over fears of diseases contracted in Africa.

This is not the first time in history that Ethiopian Jews have been asked to reform. Jacques Faitlovitch, one of the first Jewish outsiders to meet the community, told the kessoch in 1904 they would have to stop antiquated paschal sacrifices if they wanted acceptance in the wider Jewish world.

Polish-born Faitlovitch also pushed them to stop Judaism's last existing monastic tradition. Ethiopia's last Jewish monk spent his final days in Israel, secluded in a synagogue annex and preparing his own food for reasons of purity. He died about 10 years ago.

Other traditions, like priestly tithes and huts for menstruating women, were also given up upon moving to Israel.

Still, the kessoch, easily recognized by their ceremonial fly-swatting tassels and rainbow-colored sunbrellas, are not ready to be relegated to history. First-generation Ethiopian immigrants still call on them to adjudicate family conflicts, lead funeral prayers, and slaughter meat according to tradition.

Israel only recently allowed kessoch into butcheries to slaughter their own animals – even though it is not considered kosher by rabbinic standards.

But the rabbis still put their foot down when it comes to marriage. To be legal, weddings must be presided by state-recognized rabbis and include mainstream Jewish practices, like exchanging rings and stomping on a glass.

Despite the country's secular majority, its Orthodox rabbis strictly govern Jewish weddings. Israel does not recognize civil marriages, intermarriages or marriages performed by rabbis from the more liberal Reform and Conservative branches of Judaism – unless they took place abroad.

Israeli rabbis have now agreed to train the 13 new kessoch to perform marriages the mainstream Jewish way. Nevertheless, for most of the kessoch, the prohibition on marrying is such a slap in the face that they cannot bear to show up at the weddings of their own community members.

Instead, they perform their own pirate wedding ceremonies for the newlyweds a few days later – a modest reenactment of the weeklong marriage celebrations they used to hold back in Africa.

At one nighttime ceremony in seaside Ashkelon, women in embroidered cotton robes bounced their shoulders to African beats. Family and friends greeted the couple with the toot of a golden horn. Honey beer flowed from a steel kettle, and an army of men scooped curried lamb – slaughtered by the presiding kess – onto flat injera bread.

Newly ordained Kess Abiyu Azariya, 44, pushed his way to the head of the dance floor. Wearing a white turban and shawl, he recited wedding blessings in the ancient Ethiopian tongue, Geez. "I am singing these prayers to remind the young people what a wedding was like in Ethiopia," he told the crowd in spoken Amharic.

But the young people were nowhere in sight. Most of the 300 revelers in the room were of the older generation. The dozen young Ethiopian-Israelis who showed up that evening were outside drinking cheap Israeli beer and fiddling with their smartphones. When asked about the practice, they were ambivalent.

"I hope it continues, but it probably won't," said David Nadou, 24, shrugging.

The newly ordained kessoch are trying to work against that tide. Kess Semai says they're close to ordaining yet another group of 30 kessoch – even though Israel vows not to recognize any more.

"We kept this tradition for more than 2,500 years," Kess Semai said. "Our community won't allow in the span of 30 years for this tradition to be erased completely."