« Hundreds Of Haredim Riot In Beit Shemesh | Main | Is There No Stopping The Flood? »

Will Sanity Win Out Over Extremism, Denial, And Censorship?

When she sat down last week in the front of a gender-segregated bus on its way from to Ashdod to Jerusalem, the sole haredi woman amid men, Yocheved Horowitz did not imagine that her actions would prompt such contradictory responses. In haredi society, it is not customary to protest radicalization, and it certainly is not customary for women to do so. Phone calls started coming in. Some condemned not only her protest, but primarily the fact that she had cooperated with a secular newspaper. She responded to all: "Let me say these things in a haredi newspaper." 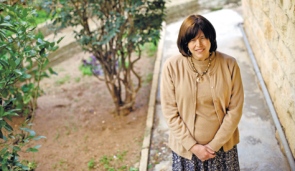 Sane voices
When Yocheved Horowitz, an ultra-Orthodox woman from Ashdod, sat down in the front of the gender-segregated bus, she believed her protest would provoke a change among the silent Haredi majority. Others aren't so optimistic.
By Tamar Rotem • Ha’aretz

When she sat down last week in the front of a gender-segregated bus on its way from to Ashdod to Jerusalem, the sole Haredi woman amid men, Yocheved Horowitz did not imagine that her actions would prompt such contradictory responses. In Haredi society, it is not customary to protest radicalization, and it certainly is not customary for women to do so.

Horowitz was prepared for abusive comments. As a Haredi woman, news of the publication of her unusual remarks condemning the humiliation of women on the so-called mehadrin buses spread quickly. Even before Shabbat, many had read the article about her in Haaretz or in pieces on the Haredi news sites. The story spread through the ultra-Orthodox community, where everyone knows everything about everyone. Within hours everyone knew who her husband was and how to reach her.

Phone calls started coming in. Some condemned not only her protest, but primarily the fact that she had cooperated with a secular newspaper. She responded to all: "Let me say these things in a Haredi newspaper."

"After all, if I could give an interview to a Haredi newspaper, I would do so," she says. "That shut up the critics. They know you can't denounce the mehadrin [bus lines] in Yated Neeman. The only way I can express my opinion is by bypassing the Haredi press. The trouble is that most of the people responding hadn't read the article. If they had, they would have seen that I did not in any way desecrate the Lord's name," she says.

"What I found funniest was that commenters called me a 'secular woman in a wig.' People who write things like that are empty," she says. "I wasn't offended. I'm not afraid of those who oppose me; what's important is that they speak with respect. And I told those who contacted me that it is not written anywhere that women have to sit in the back."

But along with the expected opposition, she also received positive responses. "Courageous woman," "you are privileged," "you sanctified the Heavenly Name in public" are some of the things fellow ultra-Orthodox told her, whether in online comments on news sites or in Haredi forums, or phone calls from strangers.

Many Haredi streams - the entire Lithuanian public, Sephardim, Shas and the like - oppose gender segregation on buses. But now they seem to be pleased that Horowitz did their work for them, despite the convention in conservative societies of not washing dirty laundry in public. Many people evidently felt that she spoke for them.

She had been thinking of protesting for a long time. "I wanted to signal to the extremists, and not only on buses, that women are not hefker" [literally "ownerless property," though in this context meaning expendable]. "Of course I was scared at first. The Haredim don't like things like this. They fear having their name and image publicized. I was afraid of what people would say, especially my family. But I went with my truth and I knew that without a name the act would be less credible, and so I decided to go public."

Horowitz views the campaign in Beit Shemesh by the extremist Sicarii, who made headlines last week after grown men spat at an 8-year-old girl whom they believed was not dressed modestly enough, as yet another misinterpretation of the Torah. "The Sicarii are insane, and I don't even consider them religious. Lately everything has become forbidden, and I think that's extremist and twisted."

Following the reactions to her protest, Horowitz says she believes others will join her campaign against exclusion of women. "Suddenly they [the Haredim] can see that there is someone with the courage to broach this controversial topic. They never dreamed that a Haredi woman would know how to answer, wouldn't be afraid and would know how to handle insults. Now I am waiting for other women to start talking."
'Vulgarization of religion'

One person who encouraged Horowitz but sounds a lot less optimistic is Dov Halbertal, an attorney and lecturer in Jewish law at the Hebrew University in Jerusalem. Halbertal, who is himself Haredi, has been visiting the home of Ashkenazi Haredi leader Rabbi Yosef Shalom Elyashiv for years. He has long warned against what he calls the politicization of religion, and against radicalization, such as that embodied by mehadrin buses or the Beit Shemesh zealots. He denounces "the vulgarization of religion that finds expression in the exclusion of women."

"This is not just an internal problem within Haredi society," he says. "Religion is taking over politics because it has a tendency to take over, and the ones who are pulling this cart are the silent ones," he says. This makes Horowitz's action "brave and truly unique."

"Beit Shemesh and the buses are not the main problem," Halbertal claims. "They are symptoms of the politicization of religion. They are the results of extremists feeling secure because they're receiving backing from the establishment. They have tremendous backing and tremendous security because they receive funding from the state. After all, what motivates them is taking control of the country. How could buses be stopped in Mea She'arim [as happened several years ago] and the police do nothing? One day you'll find yourselves, secular women and the general public as a whole, silenced altogether."

Halbertal says "the solution is to use force against the extremists and to forcibly remove the skullcap from the state." He has taken a great deal of flak from his community over his call for separation of religion and state, so he knows how hard it is for sane Haredim to go against the flow. Like Horowitz, he too evokes contradictory reactions. His Haredi detractors call him a fascist and a leftist, but he also has supporters.

"The Haredi street is against me. The online commenters swooped down on me from every direction. They consider me less than dust. But there are quality people in the Haredi world, mainly young people, including the sons of yeshiva heads, sons of people in key positions, who tell me, 'Go ahead.' They tell me, 'we can't express ourselves, but you speak for us.'"

He understands why they aren't speaking out, but he believes the majority's silence is a show of cowardice and servility. "The little guy doesn't usually come out against the majority. But that is a problem. Martin Luther King, Jr., said that more than condemning the bad people, we must condemn the silence of the good."

He can't vent his opinions in the Haredi press. "If I write in Yated Neeman, I'll be immediately thrown out of the community. The community is terrorized by way of such issues as matchmaking. After all, everyone has to arrange marriages for his children. But if you say a word or two in favor of secular people, they won't want to match anyone to your children. So you have a responsibility. The upshot is that your average Haredi is captive. Therefore only those handful of people who are not submissive can do something that might lead to change."

"There are many matters about which the public has an opinion, but keeps it to itself," concurs a Haredi man who refuses to give his name. "People don't want to oppose, and they've gotten used to the extremists calling the shots. It's a dictatorship. The public doesn't like that it has to go along with the trend. So if you do hear from a man with other opinions, it influences you. It rouses you to action."

However, Haredi journalist Moshe Glasner thinks ultra-Orthodox condemning the exclusion of women won't change the consciousness of their public. Moreover, he says the media's preoccupation with these matters has hurt the cause by strengthening the community's sense of persecution.

"All this has done is strengthen the extremists, because the attack was on us as a Haredi public, and it was brutal," Glasner says. "Right now, people feel they are under heavy artillery fire, that the discussion has gone beyond the legitimate. In this state we cannot respond to the issue at hand, and that places the entire public reluctantly on the extremists' side. Even if there is a sane public that opposes segregated buses, they cannot speak out right now." Glasner adds, "It would be like proposing a vote of no-confidence during wartime. After the war, as it were, we'll set up a committee of inquiry. And we'll do the reckoning ourselves."

He says the Orthodox deal with issues such as segregated buses and the Sicarii on a regular basis. Within the Haredi media, there is a fundamental debate regarding who is to blame for all of this, and why the rabbis have not clearly denounced the Sicarii's extremism. Glasner says we have to wait and see what will happen when the smoke clears, but adds, "Anyone who thinks that the media spotlight will halt the exclusion of women, stop the mehadrin and force the extremists to surrender is mistaken."

Will Sanity Win Out Over Extremism, Denial, And Censorship?

When she sat down last week in the front of a gender-segregated bus on its way from to Ashdod to Jerusalem, the sole haredi woman amid men, Yocheved Horowitz did not imagine that her actions would prompt such contradictory responses. In haredi society, it is not customary to protest radicalization, and it certainly is not customary for women to do so. Phone calls started coming in. Some condemned not only her protest, but primarily the fact that she had cooperated with a secular newspaper. She responded to all: "Let me say these things in a haredi newspaper."