Thousands of Israelis demonstrated in Beit Shemesh today to protest haredi violence and forced gender segregation in a city that has become a symbol for the struggle against religious extremism. 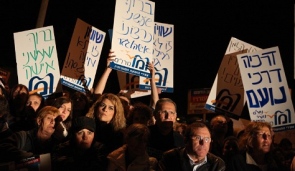 Thousands of Israelis protest gender segregation in Beit Shemesh
Rally was originally slated to take place in the courtyard of a girl's school, but the location was changed after Haredi extremists threatened organizers with violence.
By Oz Rosenberg, Barak Ravid and Talila Nesher • Ha’aretz

Thousands of Israelis amassed near the Orot girl's school in Beit Shemesh on Tuesday to protest gender segregation in a city that has become a symbol for the struggle against religious extremism.

The rally was originally slated to take place in the courtyard of the school, but the venue was changed after organizers said Haredi extremists had threatened violence unless the location was changed.

Police forces spread throughtout the city, including Border Police, detectives, and a helicopter that hovered above the crowd. Both MK Miri Regev (Likud) and Amir Peretz (Labor) were among the thousands to attend the rally.

The school's arguably most-famous student is Na'ama Margolese, the 8-year-old American immigrant who became a focal point after Channel 2 news broadcast a story Friday night showing her facing a daily gauntlet of abuse from Haredi extremists as she walks to school. Margolese did not attend the rally.

The violent scenes in Beit Shemesh on Sunday, when a Channel 2 news team was attacked by 200 Haredi men, were repeated on Monday.

On Monday morning, dozens of ultra-Orthodox men surrounded police officers and municipal inspectors who came to remove, for at least the third time this week, a sign on Hazon Ish Street, in the Haredi neighborhood Nahala Vemenuha, ordering men and women touse separate sidewalks. The men tried to prevent the sign's removal, calling the police officers "Nazis" and dancing around them in circles.

A few hours later a crew from Channel 10 was attacked as it tried to film a piece on education in the city. Police officers dispatched to the scene after the news team called for help clashed with dozens of Haredim. Some of them lay on the ground in an attempt to keep other members of the group from being arrested. Three people were taken into custody.

About an hour later, a second television crew was attacked as it filmed the controversial sign. The Channel 2 camera crew was pelted with eggs, and a videographer was physically assaulted. Police officers sealed off the street and found themselves facing around 300 Haredim who shouted at them to leave, threw rocks at them and set dumpsters on fire. Officers detained three suspects for questioning.

“I will continue to serve, as long as the public wants me here”, Abutbul said.

Abutbul also lent his support to the struggle against religious extremism in the city, stating that he will “act decisively against anyone who lifts a hand on children,” but claimed that the controversial sign has been around for 10 years, and the city has "never received a single complaint."

At one point during the press conference, a man interrupted the mayor, yelling him down and calling on him to step down. Security officers were able to remove him from the premises.

Thousands of Israelis demonstrated in Beit Shemesh today to protest haredi violence and forced gender segregation in a city that has become a symbol for the struggle against religious extremism.