National Infrastructure Minister Uzi Landau decided Sunday to pull the "kosher electricity bill", which would have forced the Israel Electric Corporation (IEC) to operate power stations "according to halachic demands" and allowed the Rabbinate to cut off power when it chose to. 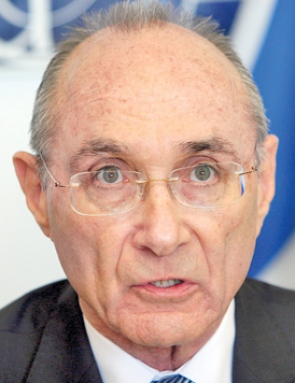 National Infrastructure Minister Uzi Landau decided Sunday to pull the "kosher electricity bill", which would have forced the Israel Electric Corporation (IEC) to operate power stations "according to halachic demands" and allowed the Rabbinate to cut off power.

Landau's plan to promote the bill generated thousands of angry responses on Websites and social networks, including a Facebook group which organized a demonstration outside the Knesset.

Following the public pressure, Landau stressed his concern that the proposal would lead to a change in the status quo. He clarified that he would continue to search for a solution to the life-endangering situation in which thousands of families in Israel receive electricity illegally.

Former Knesset Member Avraham Poraz (Shinui) told Ynet last week, "This religious coercion is everywhere: In electricity, in the exclusion of women from Jerusalem billboards, and the fact that the Finance Ministry tried to count the number of students at a yeshiva recently, but stopped after stirring a commotion.

"The religious riots in the territories have to do with the same process. They feel they have the support of the government, which is allegedly headed by a secular prime minister, but one who keeps on trying not to anger his religious partners."

According to the bill, first reported by Yedioth Ahronoth, kashrut supervisors would be posted in all power stations in Israel. They will be asked to supervise the stations' activity from a halachic perspective and will even be able to have them shut down should they fail to meet Rabbinate rules.

The law's initial cost was estimated at hundreds of millions of shekels – which will be paid by consumers.

According to Poraz, "The IEC is a monopoly, so it can increase rates in order to cover any additional expenses – and, naturally, we will be the ones to pay for it."

"Someone there can't find the brakes and doesn't understand the place of religion within a state. It makes no sense to have the Rabbinate supervise electricity systems. Have you ever heard of such a thing?"

'Even Shas wouldn't propose such a bill'

According to Gitzin, Israel is changing its definition as a democratic country. "It's going in the direction of a halachic state, like the dark regimes in Iran and Saudi Arabia. Why just take the IEC and army? Let's take the entire State of Israel and have a rabbi or ayatollah lead us?"

He noted that Minister Landau was elected on behalf of the Yisrael Beiteinu party by people with a civil agenda, most of them secular Jews. "He's not just showing contempt for the people of Israel but for his voters as well. I don't think that even a Shas minister would dare propose such a bill."

Attorney Yizhar Hess, executive director and CEO of the Masorti Movement in Israel, is angry too. "Why stop with the IEC? The Chief Rabbinate could also supervise the collection of taxes, gas drillings, the length of people's haircuts and the monitoring of air pollution.

"The State of Israel is becoming a halachic state. Our money is being used to corrupt and increase the institution called the Chief Rabbinate, and it seems no one knows where it begins and where it'll end. This is a scary situation threatening the State of Israel's existence as a democratic country."

Meanwhile, the Web is gushing with protest messages against the new move. One of the members of the group organizing the Knesset protest appeared doubtful: "I'll take part in the protest, but I think we would be naïve to believe that it would make a difference.

"The Knesset doesn't care about us. We should move the demonstration to the infrastructure minister's home and confront the haredim directly. In all kinds of ways: Boycott stores with kashrut certificates, demand that the opposition parties promise not to sit in the same government with haredim if they win the elections."

Yair Hasson and Yoav Malka contributed to this report.

National Infrastructure Minister Uzi Landau decided Sunday to pull the "kosher electricity bill", which would have forced the Israel Electric Corporation (IEC) to operate power stations "according to halachic demands" and allowed the Rabbinate to cut off power when it chose to.