Givat Shmuel municipality has canceled 24 planned performances by Italy's Medrano Circus later this month, because half of them were to feature a program specially adapted for a haredi audience - meaning male performers only.

The Givat Shmuel municipality has canceled 24 planned performances by Italy's Medrano Circus later this month, because half of them were to feature a program specially adapted for a religious audience - meaning male performers only.

Angered by the news, the city refused to grant the circus the necessary permits for its performances, which were due to begin on December 20.

The first "religious-friendly" circus performances took place last year in Lod, under the title "Circus with a Skullcap," and according to impresario Doron Etzioni, they were a huge success. Therefore, when he brought in Medrano this year, he and the circus agreed that a few performances would similarly be in this format. This time, however, he decided the venue would be Givat Shmuel, the last city in which Medrano was due to appear on its Israel tour.

Etzioni said it never entered his head that performances aimed at the religious public would spark opposition, and especially not in a city with many religious residents. But that is what happened when the first advertisements for the show appeared two weeks ago.

But Givat Shmuel Mayor Yossi Brodni, who confirmed to Haaretz that he ordered the show canceled, doesn't care how minor the changes are. He said he was angry that Etzioni failed to tell the city some of the performances had been adapted for a religious audience. "I was hurt. I felt deceived," he said. "I don't do business with people who deceive me, and I won't lend a hand to an event for a particular population group. I have no right to do such a thing."

Etzioni admitted that he didn't tell the municipality about the special performances, and that this might have been a mistake. But he said he refrained from doing so only because he didn't think it was a big deal. "There are a few minor cosmetic changes that, if you make them, it's much more comfortable for the religious public to come," he said. "There was no group of rabbis that sat down and dictated the content to me."

Etzioni said the city didn't explain its decision to the circus, but after making some inquiries, he concluded that Brodni feared the city would be stigmatized as extremist if it allowed performances tailored to the religious public. "They don't want to be seen as an overly religious city," he said. "But in my view, nothing terrible will happen if a few ultra-Orthodox people cross the road from Bnei Brak to attend the show."

The population of Givat Shmuel is roughly half religious and half secular, and Brodni, who himself is religious, admitted that he fears upsetting the delicate balance in the city. "Givat Shmuel is mixed, like every other city in Israel," he said. "Why does there need to be different advertising in Givat Shmuel? I'm the mayor of everyone, without exception. None of us has the luxury, or the possibility, of trying to separate himself from anyone else."

Brodni said he decided to cancel the performances immediately after seeing the ads. He made the decision on his own, he said, but claimed it has won wide support from city residents. "It's important to me that Givat Shmuel preserve a mix of secular and religious people, side by side," he stressed.

Etzioni's company said that thousands of people had already bought tickets to the Givat Shmuel performances, so when the city canceled it hastened to find a replacement. That turned out not to be a problem: Or Yehuda agreed to host the 24 performances, including those for a religious audience.

Medrano Circus has been performing in various Israeli cities since February. Its tour was originally scheduled to end last month, but because it has been so successful, it decided to tack on another four cities. According to Etzioni's company, more than 200,000 people have seen the show so far.

The two-hour show features more than 40 performers from around the world. It does not include animals due to the Tel Aviv municipality's decision a few years back to ban the use of animals for entertainment.

Cirque Medrano is actually French, not Italian, and it is famous worldwide for great shows that are affordable enough to be staged in smaller markets.

As you can see from the above photo of the circus, used to promote Medrano's spring 2011 performances in Tel Aviv, there is more than one woman in Medrano's show. You can also see in the picture posted below.

It appears the Orthodox or haredi promoter Doron Etzioni's lies go beyond failing to tell the city that some of the shows would be censored.

A private company not using government money is free to set up haredi-sensitive shows if it so desires. The issue is what happens when government funding and sponsorship is involved.

A case (that I agree with) can be made for allowing some of the shows to be haredi-sensitive, and perhaps the city would have allowed it if Doron Etzioni hadn't deceived the city from the start. 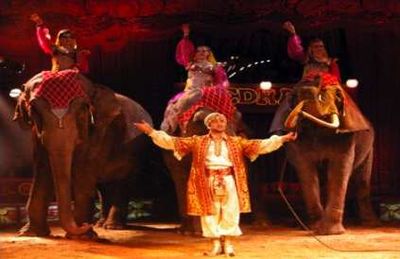 Posted at 09:12 AM in Bans & Censorship, Haredim, Israel | Permalink

Givat Shmuel municipality has canceled 24 planned performances by Italy's Medrano Circus later this month, because half of them were to feature a program specially adapted for a haredi audience - meaning male performers only.