Israel is running out of burial space and the government has responded by allowing multi-tier burials – a method used by Jews in ancient Israel and at other times and places throughout history. But haredim – led by a Chabad messianist rabbi – strongly oppose the move and call the burial method "non-Jewish." The burial mitzvah is the Torah's most important command, the Chabad messianist said, and therefore he was mandated to defend it. 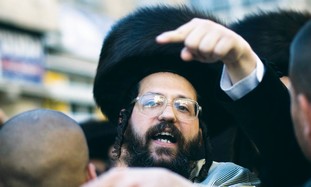 Religious Services Minister Yakov Margi (Shas) and the ministry's director-general, Avigdor Ohana, launched a new campaign Monday aimed at making it easier for families for accept the "multi-level burial" of their loved ones – the most common burial method in Israel today.

A group of ultra-Orthodox men held a demonstration outside the auditorium, claiming that the innovative method contradicts Halacha and is "not Jewish burial". The move was blasted by haredi media as well.

In the Jerusalem conference, Religious Services Ministry officials explained to heads of the Chevra Kadisha burial services that the wide public had gotten used to field burial and was finding it difficult to see its loved ones buried in the different "dense burial" methods following the shortage of burial spaces.

In the coming weeks, Israelis will be exposed to a television, radio, newspaper and Internet campaign aimed at convincing them that this type of burial is halachically permitted and is not considered desecration of the dead.

"People have yet to internalize this possibility, which is considered innovative and nontraditional," said Ministry Director-General Ohana. "In this campaign we'll prove the opposite."

According to Ohana, dense burial is not being funded by the Finance Ministry, forcing Chevra Kadisha companies to do so from their income from field burial. As this income is slowly decreasing, he called on the State to take part in the funding.

"This campaign is in favor of the citizens," said Minister Margi. "Before the funeral emotions are high, and decision making is irrational."

He added that Israel was running out of burial spaces, causing field burial prices to soar.

The minister took the opportunity to deny claims that women are being excluded from cemeteries by not being allowed to eulogize or escort their loved ones to their graves.

"If someone wants to blame this problem on Chevra Kadisha, he is doing wrong to them, to the public and to the concept of 'exclusion of women," he said. "We instruct Chevra Kadisha to be attentive to the families' needs, and this is done even when they go to extremes with their demands."

The conference attendees were presented with televised comments by Israel's Chief Rabbis Yona Metzger and Shlomo Amar, in which they sought to prove that dense burial was halachically permitted.

The Religious Services Ministry is referring to the method as "Sanhedrin burial", implying that many of the greatest sages of Israel were buried in the same way.

Not everyone in favor

But not everyone in the haredi public was convinced. The Yated Ne'eman newspaper, considered the Lithuanian rabbinical leadership's mouthpiece, published an extensive report on the issue over the weekend.

Under the headline, "Reform in burial services," the newspaper reported of "an attempt to change the old field burial custom with dense burial in levels and niches, in complete violation of the Halacha."

According to the haredi newspaper, the ministry's campaign is expected to include 'false and distorted halachic rulings in the name of the greatest sages of Israel, while all sages and rabbinical authorities were strictly against any change in the burial custom."

Rabbi Gedaliah Axelrod, president of a Haifa rabbinical court, who protested with the group of haredim outside the conference, told Ynet: "We failed to find any 'genius element' in the fact that graves are being pushed into buildings and niches – this never happened when there was a space shortage in Europe."

According to the rabbi, there is enough land in the State of Israel to bury all the deceased in the field burial method, but the government is avoiding it.

The protestors held signs reading, "Multi-level burial is not Jewish burial," and Rabbi Axelrod explained that Rabbi Ovadia Yosef was almost the only prominent religious authority to allow it. "(Moses) Mendelson was wrong too, and he is the father of Reform Judaism," he said. "I'm not saying Rabbi Ovadia is Reform, but he is wrong."

Axelrod added that the burial mitzvah was the Torah's most important command, and therefore he had to defend it: "It's customary to ask the deceased for forgiveness after the burial, but today Chevra Kadisha is doing it a moment after placing them in a pool of cement.

"I don’t blame the religious services minister as I don't expect him to be familiar with the religious rules, but I do blame rabbis who permit such a thing."

This type of burial was done by Jews in ancient Israel and by Jews elsewhere and throughout history as needed.

But haredim don't study archeology or ancient history, and Ashkenazi haredim know next to nothing about Jewish burial customs in Sefardi/Mizrachi areas. And not only do they not know, they also do not care.

Rabbi Axelrod is a Chabad messianist .

Neither care very much about the truth if the truth is defined in a way that includes historical and scientific fact.

But Axelrod is even more extreme, if Ynet correctly paraphrased him. Burial is not "Torah's most important command" – acknowledging the unity of and singularity of God and rejecting idol worship are the two most important, followed by saving human life and not murdering a human being, which are in turn followed by the prohibitions against incest.

Saving life always trumps all of the other 612 mitzvot – unless the rescuer is is told he must sleep with his sister in order to save her life, or bow down to an idol in order to save a person's life, or kill an innocent third person in order to save a second person's life. In those and similar cases involving idol worship, incest and murder, the prohibitions against these sins is more important than saving life, and the rescuer is forbidden to transgress any of them. But all of the remaining 609 commands can and must be violated if necessary to save life. And the mitzvah to bury the dead is one of those 609.

In other words, it is a clear matter of fact that burial of the dead is not the "most important command" in the Torah.

Posted at 07:26 AM in Haredim, History, Israel | Permalink

Israel is running out of burial space and the government has responded by allowing multi-tier burials – a method used by Jews in ancient Israel and at other times and places throughout history. But haredim – led by a Chabad messianist rabbi – strongly oppose the move and call the burial method "non-Jewish." The burial mitzvah is the Torah's most important command, the Chabad messianist said, and therefore he was mandated to defend it.