Some haredi burka cult women have begun wearing a cloth-covered funnel-shaped tube on their heads under their head scarves in order to better conceal the shape of their heads. 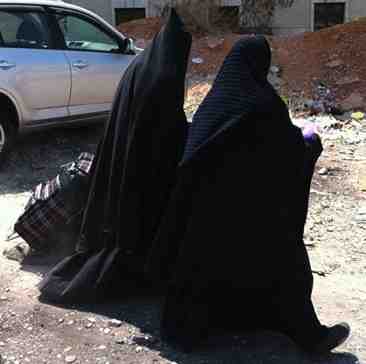 Two haredi "Taliban" women. The one on the left has a funnel-shaped tube placed on her head under her head scarf.

Have the "Taliban women" invented a new strict modesty rule? According to testimonies received by Ynet's local portal, Mynet, the radical group of ultra-Orthodox women dressed in cloaks has begun wearing a cloth-covered tube on their heads in order to conceal their human figure.

A source close to the group reveals that "the stricter members have decided that the veil is not enough, as the form of their face can still be seen. The solution found is a sort of pipe in the form of a funnel, which they wear on their heads under the veil."

The haredi public recently stepped up its war on the radical phenomenon, and even the most conservative rabbis affiliated with the extreme Eda Haredit faction have lashed out at the women.

A special meeting of the Badatz – the Eda Haredit's supreme religious-spiritual authority – concluded with a proclamation titled, "Holy call for the sanctity of Israel's homes." The rabbis warned Jewish women to stay away from the customs and ways of the "Taliban women", who "are doomed".

Some haredi burka cult women have begun wearing a cloth-covered funnel-shaped tube on their heads under their head scarves in order to better conceal the shape of their heads.