Most haredi boys receive little or no education in secular subjects, which makes them nearly unemployable as adults. "There are two States of Israel in one," said economist Dan Ben-David, head of the Taub Center for Social Policy Research. "One is a state of high-tech, universities and medicine at the forefront of human knowledge. And then there are all the rest, who make up a huge and increasing part of Israel and who do not receive the skills or conditions to work in a modern economy." 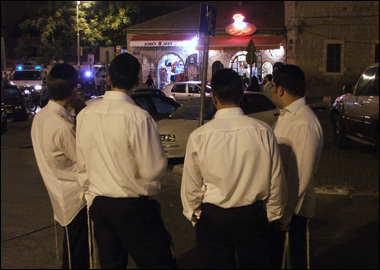 JERUSALEM (Reuters) - There are no computers at Maoz Hatorah, an ultra-Orthodox Jewish boys school on the outskirts of Israel's bustling high-tech commercial hub, Tel Aviv.

In the classrooms, English, mathematics and science lessons are kept to a minimum.

"If we devote our time to secular studies there will be none left for faith," the headmaster said.

Most ultra-Orthodox Jewish boys receive little education in secular subjects up to age 14 and none afterwards. The bulk of the school day is instead focused on religious instruction, in preparation for a life devoted to the study of Torah (Jewish law) that many will pursue as adult men.

Some in Israel say this leaves graduates no chance to get a job or integrate into modern society.

Critics are concerned the poor education of the state's fastest-growing population, known in Hebrew as "haredim" or "those in awe," threatens Israel's thriving economy and cutting-edge research and innovation.

"There are two States of Israel in one," said economist Dan Ben-David, head of the Taub Center for Social Policy Research.

"One is a state of high-tech, universities and medicine at the forefront of human knowledge. And then there are all the rest, who make up a huge and increasing part of Israel and who do not receive the skills or conditions to work in a modern economy."

Though haredi schools are partly or fully state-funded, curricula are guided by ultra-Orthodox rabbis who resist outside intervention. Those have remained largely unchanged for the past 60 years.

As a succession of Israeli coalition governments have relied on the support of ultra-religious parties for their survival, any move to reform haredi schools is politically dangerous.

Haredim make up about 8-10 percent of Israel's 7.8 million population. Many are supported by the state and live well below the poverty line.

They mostly reside in their own towns and neighborhoods, shying away from Israel's secular majority. Haredi men wear traditional black garb, a dress code that goes back centuries.

With an average of eight children per family, haredim are a young demographic, and a fifth of Israeli primary school pupils attend haredi schools.

"If they continue to get education below Third World standards, it will be the end of Israel," Ben-David said.

As haredi women do not engage in full-time religious study, they are taught all subjects at school as girls and have an unemployment rate around 40 percent. But about 60 percent of haredi men do not work, devoting themselves instead to religious study.

From the age of 14 most ultra-Orthodox boys attend "yeshiva" school where secular subjects are off the agenda.

"It is a severe and very serious problem," Bank of Israel Governor Stanley Fischer said in September. "The educational system ... is failing to prepare Israel for the modern world and we're falling further and further behind.."

Haredim see their education in a different light.

They advocate a pious way of life, dedicated to keeping God's laws.

"This is the reason we come into the world and it can't be done without studying Torah," said Rabbi Assaf Avitan, head of Maoz Hatorah school which teaches 500 boys, aged 3 to 15.

Avitan said that at that age the school's priority is to instill the right values in the children, and argues the demanding education makes the children a quick study.

"Studying Torah gives spirituality, delivers one from needless desires and allows a life free from the pursuit of this world's materialism."

Torah study is one of the most important religious decrees for haredi men and Torah scholars are revered in ultra-Orthodox communities.

"We do not seek the new. On the contrary, we wish to emulate the ways of our forefathers. We study our own Torah first and only then turn to the wisdom of the world. If we do not keep the Torah, which has protected us for thousands of years, who will?"

SWIMMING AGAINST THE TIDE

A report by the Organisation for Economic Co-operation and Development (OECD) this month said problems in haredi education were "likely to increase in importance over time" and that Israel must step up pressure on ultra-Orthodox schools.

"The ultra-Orthodox community should be more forcefully encouraged to strengthen the vocational skills of its youth, in part by stronger curriculum requirements for the receipt of state funding," the report said.

One bill along those lines was rejected by the government this month, the latest of many failed attempts to inject "core curriculum subjects" like maths, English, science and civics into haredi schools.

Prime Minister Benjamin Netanyahu appointed a panel of experts in August after a social change movement swept through Israel over the summer demanding sweeping economic reform.

One of the panel's recommendations was to enforce teaching "core" subjects in haredi schools. But commentators see little chance of Netanyahu succeeding where all have previously failed.

Ynet, the website for Israel's most popular daily Yedioth Ahronoth, published a poll recently which said 80 percent of 800 Israeli Jews polled believed core subjects should be forced into haredi schools.

A spokeswoman for the Education Ministry said inspection of haredi schools has been boosted in the past two years and that the measure of state funding matched the degree to which schools taught core studies.

But a law passed in 2008 allows boys at yeshiva high schools to receive funding even if they do not teach those subjects. Amnon Rubinstein, a former Israeli education minister, has petitioned Israel's Supreme Court to repeal the law.

"A haredi adult should have the choice between remaining in the haredi stream or finding a place in Israel's economy. When a haredi child has no elementary knowledge of maths, computers and English, he is robbed of that choice," Rubinstein said.

The Supreme Court has not yet given its ruling. But haredi leaders have said coercion was unacceptable.

"Anyway," Moses said, "how would you enforce it? put all the parents in jail?"

Moriya, an 18-year-old haredi student who did not want to give her full name, said she doubted it was possible to enforce mandatory secular studies. "You can't force a person to learn something he does not want to," she said.

Yaakov Rabi, 23, a haredi economics student at a Jerusalem college, said he had only basic knowledge in maths before he began his studies. "It was hard to narrow the gaps, but where there is a will, there is a way."

Rabi said he hoped to find a respectable, lucrative job when he graduated. He said he was not subjected to pressures from within his community to give up his studies "but I can say this, it takes courage to swim against the tide."

Most haredi boys receive little or no education in secular subjects, which makes them nearly unemployable as adults. "There are two States of Israel in one," said economist Dan Ben-David, head of the Taub Center for Social Policy Research. "One is a state of high-tech, universities and medicine at the forefront of human knowledge. And then there are all the rest, who make up a huge and increasing part of Israel and who do not receive the skills or conditions to work in a modern economy."