Haredi exclusion of women "is one of the reasons I left religion," Heidi Moses says. 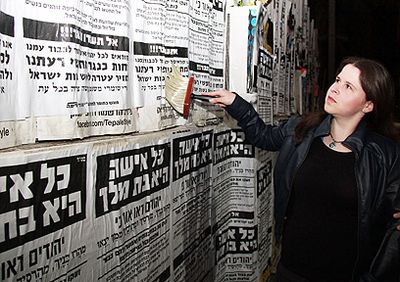 Street posters calling on the public to act modestly and observe mitzvoth were joined Monday night by ads against the exclusion of women.

The people responsible for these unusual "pashkvilim" are young activists of the Kadima party, who decided to adopt the ultra-Orthodox method to protest the controversial phenomenon in which women are excluded from the public sphere.

Surprisingly, one of the activists who helped post the ads was the daughter of Deputy Education Minister Eliezer Menachem Moses of the haredi United Torah Judaism faction.

"The pashkvilim's aim is to encourage women to fight for their rights and not to accept exclusion," the former haredi Heidi Moses told Ynet. She said the exclusion of women was one of the reasons that made her leave religion, adding that "recent events have set a new record."

"As a young girl and teenager in the haredi society 15 years ago, I was never told to move to the back of the bus or 'disappear' from a certain area because I am a woman. I could always sit wherever I chose," she said.

Moses admitted, however, that "one of the reasons I left religion was the exclusion and the fact that religion has no place for women today."

She added that halachic rulings like the ones delivered recently were not acceptable in the past.

"Religion originally recognizes women and treats them like queens. Maimonides viewed women as a respectable thing, and as such she should wear nice clothes and be pretty.

"Today, a group of Khomeinistic extremists is taking over and influencing the general public. Unfortunately, this phenomenon is just growing."

The pashkvilim distributed Monday night in Jerusalem, Tel Aviv and Haifa call on the people of Israel to take action and not to "stand idly by".

"Every woman is a king's daughter… We call on every Jew concerned about the dignity of our people to protest."

Kadima activists distributed the ads in response to last week's incident, in which Tanya Rosenblit refused to move to the back of a bus traveling from Ashdod to Jerusalem.

Moses added that her father was against exclusion as well, and had suggested a solution by which women would sit at the front of the bus while men feeling uncomfortable would move to the back.

Kadima and Opposition Chairwoman Tzipi Livni slammed the phenomenon as well, saying that "this is a battle over the State's image, and nothing less. It's time for the public to wake up and realize that the exclusion of women is not just a problem faced by women, but a danger to the entire society.

"Exclusion of women does not stand alone; it is directly related to the radical wave washing through Israel, which includes rocks being thrown at officers, mosques being burned and anti-democratic laws being enacted."

Haredi exclusion of women "is one of the reasons I left religion," Heidi Moses says.