An ex-hasid meets his hero Christopher Hitchens the night before Hitchens is hospitalized. And now the ex-hasid remembers his hero. 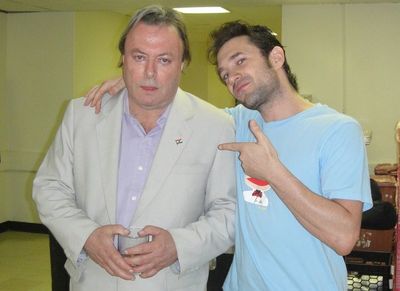 Rabbi Aryeh Kaplan, who is trashed by Joshie Berger in his Hitchens piece on Heeb, was a world class physicist. The kabbalah and hasidut he wrote about may have, in truth, been BS. But Kaplan wasn't allowing that BS to simply override science and history. Instead, he worked very hard to find was to rectify science with Torah, and he didn't do this by using gimmicks or relying on cheap apologetics.

Kaplan was a poor man who died poor because he chose to work translating sefarim (Jewish religious books) for those who could not understand the Hebrew.

He was a key figure in the Association of Orthodox Jewish Scientists when science and truth actually mattered to it.

He didn't lie or cheat or steal, and he didn't knowingly trick people.

In the end, he would have been better off to work in physics.

But he doesn't deserve the trashing Berger gives him.

Hitchens would have liked the guy personally. He would have respected his intelligence. And then he would have beaten him in debate.

But I don't think Hitch would have crushed Kaplan the way he easily crushed Boteach or so many others. It would have been a real fight.

But Hitchens would have won.

And then he would have bought Kaplan a drink.

An ex-hasid meets his hero Christopher Hitchens the night before Hitchens is hospitalized. And now the ex-hasid remembers his hero.