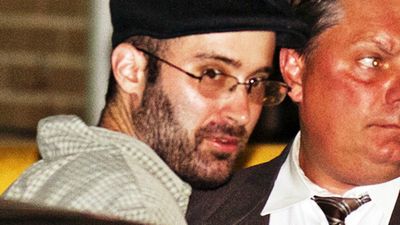 A lawyer for the Borough Park madman accused of butchering a lost little boy said that Levi Aron's actions can be partially pinned on in-breeding.

Aron, 35, is accused of kidnapping 8-year-old Leiby Kletzky off a Borough Park street in July, then killing and dismembering him.

The little boy was alone for the first time trying to meet his mother when he was snatched off the street, setting off a massive search that ended in horror inside Aron's apartment.

Aron did not appear in person for his latest court date, but instead was flashed into the courtroom on a television screen. He was slumped over and seated alone at a table at Rikers Island.

The lawyer repeated outside of the courtroom that he will pursue an insanity defense. Aron has already been found fit to stand trial.

"It's a very simple case," Greenberg said. "You don't do this unless you're crazy."

The flamboyant defense lawyer previously vowed to quit the practice of criminal law if Aron isn't found to be insane.

An attorney for accused child killer Levi Aron continued to push for an insanity defense Wednesday, describing his client as a diagnosed schizophrenic who suffered a head injury in his youth.

Lawyer Howard Greenberg went as far as to claim that inbreeding in the Hasidic enclave of Borough Park, Brooklyn — where the alleged murderer and his 8-year-old victim were from — could have contributed to a mental deficiency.

"It's a very simple case: Levi Aron is either evil or he's crazy," Greenberg told reporters in Brooklyn Supreme Court after a brief hearing.

"He suffered a severe head injury as a young man. There's a history of schizophrenia," the lawyer said. "There's inbreeding in that community."

"That's an aspect of his familial history," Greenberg said of Aron, without elaborating.

The head trauma occurred when his client fell off a bike about the age of 10, he added.

Aron, 35, is charged with snatching little Leiby Kletzky off the street last July, holding him captive for more than a day and then smothering him after becoming aware of the massive search for the child. Aron then allegedly dismembered the boy’s body and kept the feet in his freezer.

Assemblyman Dov Hikind, who represents Borough Park and has been in touch with Leiby's family, called the lawyer "a pathetic figure."

"It's an insult to the community. It's degrading," he said of the inbreeding remark. "None of this is relevant. It has nothing to do with this situation and is only meant to distract us from the reality of the horrible act."

Prosecutors are likely to rebut the defense's sensational arguments by relying on extensive confessions Aron made to police indicating he knew his actions were wrong. They can also summon psychiatrists to bolster their stance.

A judge will appoint experts in coming months to evaluate Aron, who has been found mentally fit to stand trial.

"It's much too early to tell you who the witnesses are going to be," another defense lawyer, Jennifer McCann, said outside court.

The defendant was not in the courtroom Wednesday, but appeared via video hookup from jail. He was dressed all in black and seemed catatonic.

If Aron is acquitted by reason of insanity, he'll be committed to a mental institution for life.

He is due back in court in March and his trial is not expected to start for at least another year.