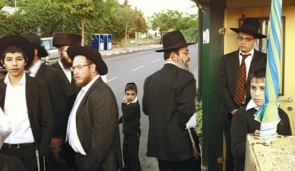 Ashkenazi and Sephardi rabbis battle over Sabbath hours in Elad
Disagreements over what time the Sabbath should commence have almost led to fist fights, as the Ashkenazis demand the city observes their traditions and the Sephardis refuse to comply.
By Yair Ettinger • Ha’aretz

Even in the ultra-Orthodox city of Elad they will be waiting Friday for the Sabbath queen. The sun will slowly set beyond the treetops, the tables will be set, the women will stand before the candles and recite a quiet prayer, the men will be washed and ready to remember and observe the Sabbath.

But a few minutes before that, will come a bit of action. The inauguration of the Sabbath in Elad has recently become the tensest hour of the week, following a disagreement between the city's Sephardic rabbi and its Ashkenazi rabbi.

The two cannot agree on the exact time for inaugurating the Sabbath. Even the leaders of the Orthodox public, Gedolei Yisrael, were involved against their will, but a solution has not been found.

The roots of the disagreement go back a long way: the Ashkenazi rabbi, Rabbi Shlomo Zalman Grossman, has always maintained that the Sabbath enters 30 minutes before the sun sets, while the Sephardic rabbi, Rabbi Mordechai Malka, puts it at 20 minutes. According to Halacha (Jewish law), every city is supposed to set additional time before sundown on the eve of the Sabbath. Most places allow for 20 minutes, but the Ashkenazi rabbis in Elad have refused, since the city was established, saying that a special window of time must be allowed for, as in places like Safed and Bnei Brak (30 minutes), and almost like that which is allowed for in Jerusalem and Petah Tikva (40 minutes). The Safardis acted according to their tradition, and added just 20 minutes, even when the sirens of Elad sounded according to the Ashkenazi system.

About two months ago, Rabbi Grossman instructed the gate to the city be closed according to the Ashkenazi timing, but Rabbi Malka opposed, claiming that the Lithuanian-Haredi minority is trying to impose its religion on the city's 40,000 residents.

According to them, Rabbi Grossman is breaking the status quo, according to which no denomination forces its practices on the other. Rabbi Grossman said this is a case of "pikuah nefesh" (Saving a Life), because as soon as Shabbat comes in the roads are filled with pedestrian worshipers rushing to the synagogue as the latecomers speed through the streets on their way home. Not long ago a boy was hit by a car, and the Ashkenazi rabbi explained that locking the gate will ensure separation between cars and pedestrians, for residents and their guests outside the city will be forced to arrive prior to Shabbat.

In contrast, Rabbi Malka's followers claim there will always be those who run late, even if the Sabbath eve started on Thursday night. Rabbi Grossman received letters of support from great Ashkenazi rabbis, including Rabbi Chaim Kanievsky and Rabbi Aharon Leib Shteinman, while Rabbi Malka received support from Shas spiritual leader Rabbi Ovadia Yosef and from the faction's Council of Torah Sages.

The narrative got more complicated and reached the local politics system. The city's mayor, Rabbi Yitzhak Idan, a Shas member, is obliged to Rabbi Malka and Shas' Council of Torah Sages, but declared himself neutral.

Two weeks ago, the disagreement over what time to inaugurate of the Sabbath almost led to violence. Drivers requesting to enter the city in the last minute, according to the Safardi timing, discovered the gate was closed by police and the city's security services. They were required to park their cars outside the city and enter by foot. One of the drivers, a Jerusalemite that wanted to reach his hosts in one of the city's suburbs, told Haaretz of the verbal violence that almost turned into a fistfight. He claimed that police took sides with the rabbis. However, Israel police said the policemen were concerned only with maintaining public order.

A solution is not in sight, despite a number of conciliatory statements. Last Friday afternoon a car fitted with a loudspeaker was expected to notify the city's residents of the hour the Sabbath was due to commence, 4:05 P.M. according to the Ashkenazi tradition. Another car, that the Safardis arranged, was expected to drive around announcing 4:15 P.M. Rabbi Malka's followers are currently trying to raise money to set up a competition siren system, that will sound ten minutes after that of the Ashkenazi siren. No one on either side of the argument would even consider the option of finding a compromise of, say, a special window of 25 minutes for Elad.