After Racist Attacks, A Lone Act Of Kindness

Amidst a series of audacious attacks carried out apparently by young Israeli settlers this week, one of the extremists’ targets stood out. It was a site right in the center of Jerusalem: The Nebi Akasha mosque, built more than 800 years ago. 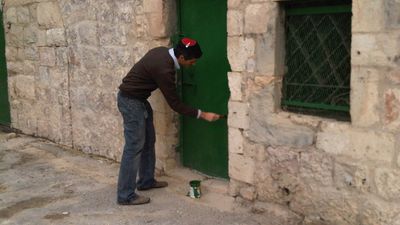 Amidst a series of audacious attacks carried out apparently by young Israeli settlers this week, one of the extremists’ targets stood out. It was a site I’d never heard of right in the centre of the city: The Nebi Akasha mosque, built more than 800 years ago.

The mosque itself is a simple single-storey stone building, with most of its barred windows bricked up – no longer active as a place of worship since 1948. Attached is a modest, attractive stone minaret that stands about two and a half storeys high.

Across a courtyard dominated by a playground filled with children on swings and climbers sits an equally old domed mausoleum. Inside this stone structure are three graves, believed to be those of some of Saladin’s commanders who perished in the taking of Jerusalem in 1187.

The mosque is named for Akasha Bin Mohsin, a 10th century Muslim, whose tomb was on the site when the stone buildings were constructed.

It was to this unused historic structure that the young extremists came before dawn on Wednesday. They threw a gas bomb through a small opening of one of the bricked up windows, scorching the stone all around the window and doing minimal damage inside.

They spray-painted on the outside stone walls and on the green metal doors things written in Hebrew such as “Mohamed is dead,” “Mohamed is a pig,” and “price tag,” a reference to the costs that Muslim and other Arab institutions will pay if Israel moves to dismantle any Jewish settlements or outposts in the West Bank.

Visiting the Nebi (prophet) Akasha mosque, Wednesday afternoon, it was clear that city workers had come by and pressure-washed the graffiti from the stone walls.

But it was a man in a trim wool sweater and red kippa (skull cap) that was painting the green doors, covering the hateful words.

Avi Mayer is not a municipal worker and has no connection to the mosque or playground. He said he works a few blocks away, at the Jewish Agency, and heard what had been done. He came right over.

“The foreman of the crew that was here this morning told me it’d be a few days before a painting crew could come by,” said Mr. Mayer. “I couldn’t stand the idea of these hateful things being seen by everyone for so long a time.”

So Mr. Mayer went to the nearest hardware store and, with his own money, bought some green paint, cleaning fluid and some brushes and returned to quietly cover things up himself. A friend helped try to clean off the blackened stones around the window, with little success. But Mr. Mayer was doing a fine job on the metal doors.

“This kind of thing isn’t good for anyone,” he said of the graffiti and the resentment it breeds. “I’m ashamed that it’s happened here.”

Mr. Mayer is Jewish, but there are many people who’d call him a Good Samaritan.

After Racist Attacks, A Lone Act Of Kindness

Amidst a series of audacious attacks carried out apparently by young Israeli settlers this week, one of the extremists’ targets stood out. It was a site right in the center of Jerusalem: The Nebi Akasha mosque, built more than 800 years ago.