Understanding Rubashkin's Sentence, And Why His Judge Is Not Hitler

A Chabad news blog writes yemach shema ("Ym"s"), the female equivalent of "yemach shemo," "may his name be blotted out" – a curse reserved for arch enemies of the Jewish people like Adolph Hitler and Haman  – after the name of Judge Linda Reade, the judge who sentenced Sholom Rubashkin to 27 years in federal prison for bank fraud, related crimes, and perjury. 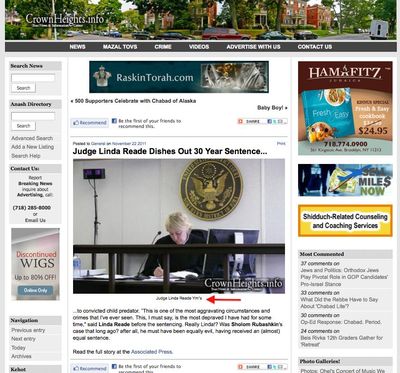 There are some basic facts about how Sholom Rubashkin was sentenced that are not well understood in Chabad and haredi communities.

I've written about these things before as part of posts on various aspects of Rubashkin's trial and his appeals.

I'm writing this post, which will be redundant to many FailedMessiah.com readers, in the hope that they and others will share this post with Chabad followers they may know, or with with others who have swallowed the Rubashkin spin whole – like, for example, the editors at CrownHeights.info who wrote "Ym"s," the abbreviation for "yemach shema," "may her name be blotted out" (a curse reserved for the greatest enemies of the Jewish people like Hitler and the biblical Haman) after the name of Rubashkin's trial judge, Linda Reade.

On a personal level, I think a 27 year sentence for the crimes Rubashkin was convicted of is too long. So what I'm writing is not an endorsement of the 27 year prison sentence Rubashkin received – it is an attempt to explain that sentence, to present the facts behind it, so you can see how that 27 year sentence came to be.

If Sholom Rubashkin had been convicted in the late 1990s instead of the late 2000s, his sentence would surely have been much less than 27 years.

If he had been convicted in the early 1980s, he might have been sentenced to a a year or two at a minimum security federal facility.

Why would the year Rubashkin was convicted matter?

Because the United States, in response to widely varying sentences handed down for nearly identical federal crimes, adopted sentencing guidelines which at first were mandatory and then became strong recommendations for which a judge had to cite specific reasons and legal precedent if s/he chose to depart from them in either direction.

Sholom Rubashkin was sentenced under those increases.

To put this in perspective, crack dealers caught by the federal government might have received three or four years before the guidelines were adopted. Afterward, they often faced effective life in prison. The stiffing of the sentences for dealing crack happened in response to the damage crack was doing to America's cities, just like the increase in sentences for white collar financial crimes was in response to the damage done to America's financial markets and investors by these white collar crooks.

But Rubashkin was not operating alone. He had more than five employees indicted for conspiring with Rubashkin to defraud Agriprocessors' lenders. Rubashkin was the leader of this conspiracy. (In truth, I believe Aaron Rubashkin was the true leader, and Heshy Rubashkin and other Rubashkin relatives also played a role, but Sholom refused to inform on them, so they were not indicted.)

Enter one count of financial fraud with a conspiracy enhancement in a US Sentencing Guidelines calculator and what you'll get is a sentence of 22 to 30 years.

Rubashkin got 25, less than he could have received.

But wait, Rubashkin got 27 years, right? Where did that extra two years come from?

Rubashkin perjured himself in court.

Judge Reade did what federal judges are allowed to do – she penalized him for that perjury by adding two years to his sentence.

So now we've seen how Rubashkin was sentenced to 27 years. But could the judge have given him a lower sentence, something less than the minimum the sentencing guidelines called for?

Yes. And she also could have given him a longer sentence than the guidelines called for.

Judges can make what are called departures from the guidelines. If they do so, they must cite al the reasons they are doing so and cite any legal precedent there may be for doing it.

In Rubashkin's case, his well-known charitable acts and his autistic child were most often cited as reasons for departing downward. Also cited was the negative impact a long prison sentence would have on his other minor children.

Lots of criminals have young children. But they usually are not granted a downward departure because of it. Family size is another issue that rarely merits a lesser sentence.

Occasionally, having a close family member with special needs can result in a downward departure – but this usually happens when the criminal is remorseful and cooperates with the prosecution and the federal agencies involved in the arrest.

It is important to understand that Sholom Rubashkin did not cooperate with the investigation against him or Agriprocessors or the other indicted Agriprocessors employees.

Not only that, Sholom Rubashkin obstructed justice and destroyed evidence. He also refused to make any form of restitution and tried to hide his assets.

These acts all but guaranteed there would be no downward departure in Rubashkin's sentence except for extreme need, and Moshe Rubashkin's autism was not enough.

Another judge may have viewed that differently, but many others would not have.

Judge Reade could also have departed upward, adding years to Rubashkin's sentence for all the immigration charges and for Rubashkin's obstruction of justice, perjuring himself to federal investigators before the trial, bribing a government official (the mayor of Postville) and other crimes he committed but had not been put on trial for, as long as those crimes were linked in some way to the crimes Rubashkin was tried and convicted of. That is how federal law works.

Judge Reade chose not to depart upward, but her sentencing memorandum says that if the sentence is returned to her for resentencing by a higher court, she reserves the right to do revisit all of these related crimes and sentence accordingly.

Despite what you may have been told by Yated Ne'eman or Chabad.info or Rubashkin's lawyers or his family or his defense fund's operatives, Sholom Rubashkin is not the only person in federal prison serving an enormous sentence for a first time offence or for a relatively small financial fraud or both. There are many prisoners like this.

But there are far more prisoners serving life or near-life sentences for selling drugs or for other crimes often associated with inner cities and minorities. Sentences for crack cocaine sales were much higher, for example, than sentences for the sale of meth, known on the streets as crank.

When the guidelines were last modified, many crank arrests were of whites, and the drug is viewed as the crack cocaine of the heartland.

This disparity was very recently addressed. (This was done about a year after Rubashkin was sentenced, I think.) But there are literally thousands of blacks (and some whites, Asians, Native Americans, etc.) serving extremely long sentences for possessing and/or selling small amounts of crack.

The problem with Rubashkin's sentence is the US Sentencing Guidelines themselves. They need to be changed, and the entire system of locking up non-violent criminals needs to be overhauled and perhaps completely changed.

If I were Rubashkin's trial judge would I have sentenced him to 25 or 27 or even more years?

But there is no way given Sholom Rubashkin's behavior that I could have sentenced him to the six or fewer years Rubashkin's supporters wanted.

The facts of the case and the sentencing guidelines would not allow for it.

She's a judge following the guidelines passed by congress.

She may lack empathy for the people she sentences or even concern for their families. But she is following the instructions given her by the American people through their elected representatives.

If those sentencing guidelines had been changed, and if they would have called for an 8 to 10 year sentence for the crimes Rubashkin was convicted of, she probably would have given him 8 3/4 and added a little more for his perjury.

There is no evidence that she is antisemitic or that she discriminated against Sholom Rubashkin in any way.

In other words, your enemy is the US Sentencing Commission's Guidelines, not Judge Reade or the other judges who heard and rejected Sholom Rubashkin's appeal.

Also realize that when a defendant chooses to plead guilty and cooperates with the investigation into his crime, he almost always gets a reduced sentence.

So when a Rubashkin supporter points to the sentence of a criminal who plead guilty and says, "Look! Rubashkin got such a long sentence and this guy got 12 years!" realize the reason for that difference is the guilty plea and the cooperation.

Rubashkin was offered two plea deals, by the way, one ofr 15 years and then a lter one for 12 years. He turned both of them down.

I should also note that state crimes and state sentences have nothing to do with federal crimes and federal sentences. These are two completely separate legal systems.

So when someone says, "Look at this murderer who got 20 years while Rubashkin – a Jew! – got 27!," realize that murderer was arrested, tried and convicted in state court.

In federal court, that murderer's sentence would have been much longer.

That's why certain Rubashkin supporters who thrive on this sort of thing don't show you any federal murder sentences with uncooperative criminals that are less than Rubashkin's sentence – there aren't any, largely because the guidelines call for life in prison.

Rubashkin's attorneys and his close supporters make these false comparisons and scream about bias because it helps the Rubashkin Defense Fund raise money.

They also do it because Rubashkin really didn't have a legal leg to stand on and trying to intimidate judges and bamboozle politicians was the only real chance Rubashkin had.

Don't let any of this stop you from donating to Rubashkin's Defense Fund if you're so inclined. It costs money to file all these appeals.

But don't be fooled.

Rubashkin isn't a martyr. He isn't serving a draconian sentence because he's a Jew or a hasid.

He's a convicted felon serving the sentence the American people through their elected representatives deemed correct for the type of crimes he committed.

Those sentencing guidelines need to be adjusted, and some provision needs to be made for those, like Rubashkin, who were sentenced under them before that adjustment is made.

As sad as this may be, it is the truth.

And, in the end, it is the truth that has the best chance of setting Rubashkin free.

Understanding Rubashkin's Sentence, And Why His Judge Is Not Hitler

A Chabad news blog writes yemach shema ("Ym"s"), the female equivalent of "yemach shemo," "may his name be blotted out" – a curse reserved for arch enemies of the Jewish people like Adolph Hitler and Haman  – after the name of Judge Linda Reade, the judge who sentenced Sholom Rubashkin to 27 years in federal prison for bank fraud, related crimes, and perjury.