Racist Rabbi To Be Criminally Investigated, But Only For Hate Speech – Not For Hate Halakha

Chief Rabbi of Sefat Rabbi Shmuel Eliyahu will be criminally investigated for anti-Arab remarks he made – but not for a halakhic ruling he issued telling Jews not to sell or rent homes to Arabs. 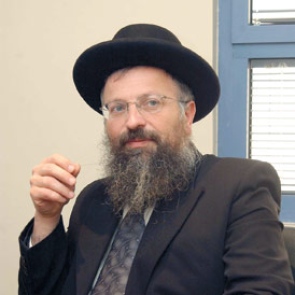 AG: Investigate Rabbi Eliyahu over anti-Arab remarks
Safed chief rabbi to be probed for saying 'Arab culture is cruel' and 'expelling Arabs from Jewish neighborhood is part of the strategy'
Aviad Glickman • Ynet

Attorney General Yehuda Weinstein announced Tuesday that a criminal investigation would be launched against Safed Chief Rabbi Shmuel Eliyahu over suspicions of incitement to racism in light of statements he made in reference to the Arab public.

Meanwhile, the AG said a criminal investigation will not be launched over the halachic ruling issued by Rabbi Eliyahu together with 50 other rabbis stating that apartments should not be sold or rented out to anyone who wasn't Jewish.

Among other things, Rabbi Eliyahu said:

"Arabs have a different codes and norms that have become ideology. Such as the agricultural thefts, which have become part of Arab ideology."

"Their behavior is unpleasant. An elderly Arab lady who recently moved into our Amidar neighborhood has already become a nuisance. Every Shabbat 10 cars filled with Arabs visit her. They play music, make noise."

"Arabs treat their women according to social norms that are supported by the Quran which allow them to hit women – and with them these are not mild blows. These are blows with chairs –abuse that ends with the woman being admitted to the hospital."

"Expelling Arabs from Jewish neighborhood is part of the strategy."

The rabbi's comments were published a few months ago.

The Justice Ministry mentioned that in 2006 Rabbi Eliyahu struck a plea bargain with the State to avoid trial on incitement to racism charges over anti-Arab remarks he had made. The rabbi agreed to retract the statements attributed to him in the indictment and apologize to those who may have been hurt by them.

As for the halachic ruling, AG Weinstein said he decided not to launch a criminal investigation because it would be difficult to prove that the ruling was issued with the intent to incite, as required by law. Weinstein also mentioned that the rabbis would benefit from the protection the law provides in cases involving the use of quotes from the scriptures. The AG said that in general he tries to avoid criminal proceedings when it comes to halachic rulings unless they sanction physical violence on the basis of race.

Rabbi Eliyahu expressed his confidence that the investigation against him for suspected incitement to racism will make his stance clearer - "that the State must act against terror supporting populations within the Arab sector, and not against the entire Arab sector."

According to the Rabbi, there is discrimination against the right wing when it comes to freedom of expression.

The rabbi also welcomed the Attorney General's decision to not open a criminal case in the matter of the halachic ruling in the 'Rabbis' letter', which he signed, that forbids the sale or renting out of apartments to non-Jews.

Attorney Aviad Hacohen, who is representing Rabbi Eliyahu, said he did not believe his client would be put on trial for his recent remarks.

Racist Rabbi To Be Criminally Investigated, But Only For Hate Speech – Not For Hate Halakha

Chief Rabbi of Sefat Rabbi Shmuel Eliyahu will be criminally investigated for anti-Arab remarks he made – but not for a halakhic ruling he issued telling Jews not to sell or rent homes to Arabs.