The haredi gadol who is the rosh yeshiva of the Philadelphia yeshiva and Agudath Israel of America's number two rabbinic leader again shows why haredi rabbis are dangerous for women and children, and that they should not be allowed to be the gatekeepers of which abuse cases are reported to police and which are not. 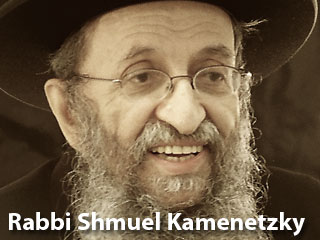 When Sex Abuse Is Nothing At All
Shmarya Rosenberg • FailedMessiah.com

Rabbi Shmuel Kamentzky is a haredi gadol who is the rosh yeshiva of the Philadelphia yeshiva and Agudath Israel of America's number two rabbinic leader. He's also considered to be the gadol who is the most friendly to and sympathetic to child sex abuse victims.

Even so, Rav Shmuel (as he is popularly known) has issued some very strange decisions on child sex abuse, including one first reported here: telling an audience in Brooklyn during the search for 8-year-old Leiby Kletzky that allegations of child sex abuse should be reported to haredi rabbis – not police. Kletzky, who was kidnapped, was murdered and dismembered by his haredi kidnapper, who had a history of strange behavior toward haredi children that had not been reported to police, the next day.

According to a source familiar with the situation, recently a woman came to Rav Shmuel with a problem.

He father had ben inappropriately touching her and kissing her over a 25 yer period, from the time she was a small child.

There were other potential victims, including young children.

Rav Shmuel did not tell this woman to call police or to call child protection services.

What did Rav Shmuel tell this victim?

According to my source, Rav Shmuel told her to, "tell your father to stop."

An adult who says this act happened to me, so-and-so touched me or fondled me, meets the supposed haredi standard, raglayim l'davar, for calling police.

So why no call to police?

So what about man-on-girl sex abuse?

Pretty much the same thing.

If there is no penetration then there was no abuse. Anything else that might have happened may be wrong, but it isn't sexual intercourse, meaning it isn't a sex act, meaning whatever it is, the halakhas that pertain to incest and rape do not apply. And since the Torah doesn't list fondling, sucking or rubbing as forbidden acts, no act has really taken place.

Enter Rav Shmuel and the victim of long term sex abuse from her father.

There was no allegation of penetration and no homosexuality, so incest, rape and "the toeivah," gay sex, were off the table.

(That rape and sex abuse isn't the same thing as sex, and that the vast majority of man-on-boy pedophiles are not gay are facts haredi rabbis do not understand because these medical facts do not fit with the Torah's Bronze Age understanding of human health and sexuality.)

Therefore, whatever took place was only a violation of rabbinic strictures, at worst, or, more likely, no violation at all.

So Rav Shmuel is faced with a distraught young woman complaining about something that, while it may be distasteful and may be something that Rav Shmuel would tell the man not to do if the man asked him for advice, isn't really a sin according to Jewish law.

So, to be kind to the distraught young woman and show empathy for her while at the same time protecting her father from police intervention that is not warranted by the Torah, Rav Shmuel gave the young woman what he surely considered to be bold advice – "tell your father to stop."

That there are other potential victims, including young girls, doesn't play into Rav Shmuel's decision because, again, there is no allegation of penetration and no allegation that the father used his mouth to kiss "that area" of the female body which is the "seat of impurity," of the menstrual blood which can make a man impure, and is that which tempts a man to ignore his higher calling and to instead act on his "base" "animal" instincts – something that while not a Torah prohibition is certainly "disgusting," even when done between husband and wife.

And this is another in a long line of examples which prove that haredi rabbis cannot be allowed to be the gatekeepers of which alleged cases of child sex abuse and rape are reported to police, and which ones are not.

During The Search For Leiby Kletzky, Senior Agudah Rabbi Shmuel Kamentzky Says Rabbis Must Give You Permission On A Case By Case Basis To Report Child Sexual Abuse To Police.

Agudath Israel Of America Says You Have To Ask A Rabbi Before You Can Call The Police On A Child Molester.

The haredi gadol who is the rosh yeshiva of the Philadelphia yeshiva and Agudath Israel of America's number two rabbinic leader again shows why haredi rabbis are dangerous for women and children, and that they should not be allowed to be the gatekeepers of which abuse cases are reported to police and which are not.