« Save Our Kids From Pedophiles | Main | Frum Woman Gets Rhodes Scholarship »

A mentally ill man who had previously run over a Chabad rabbi and was recently indicted for murder tells police: 'I came to Kotel to kill Rabbi Ovadia', but the rabbi cancelled his appearance at last minute. 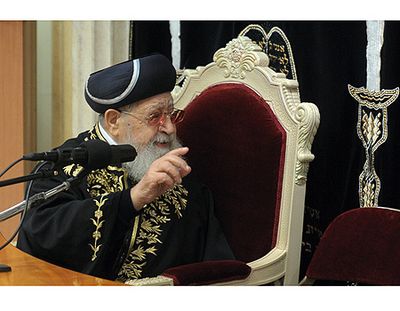 How Rabbi Ovadia Yosef murder plot was averted
A mentally ill man who had previously run over a rabbi and was recently indicted for murder tells police: 'I came to Kotel to kill Rabbi Ovadia', but rabbi made last minute cancellation
Yaron Doron • Ynet

Some will say it is providence, others will claim it is a simple coincidence: "I came to the Kotel to kill Rabbi Ovadia Yosef," a mentally ill man admitted to police when he was arrested for questioning. Based on his previous history, it is reasonable to assume that he was serious.

The mentally ill man (50) is known to the authorities. He lives in the north and was once a member of the messianic sect of the Chabad Hasidic group.

In 2000 he ran his car over then Safed Chief Rabbi Levi Bistritsky and left the rabbi severely injured. "The Rebbe commanded me to do it." He said when interrogated by police.

After the incident he was sent to a closed psychiatric ward – which he was release from a few months ago. It was then that he decided to kill Rabbi Ovadia, setting the date for fast of the ninth day of the month of Av (Tisha b'Av).

Luckily, the rabbi cancelled his visit at the last minute because he was feeling unwell.

The disappointed man went home where he wrote a letter to Prime Minister Benjamin Netanyahu's bureau in which he announced that he had put a Pulsa Denura curse (a Kabbalistic death curse) on the PM, like the one taken out on former prime minister Yitzhak Rabin before he was murdered.

The man was located, sent to observation and in the psychiatric ward reiterated his intentions towards Rabbi Ovadia. He is now under arrest awaiting trial for attempted murder after he stabbed another patient who had ripped up a picture of the Lubavitch Rebbe.

'I had to assassinate him'

During his interrogation, the man told police of his plans to kill Rabbi Ovadia: "On Tisha b'Av I equipped myself with a sharp shard of glass and went to the Kotel to assassinate Rabbi Ovadia.

"I knew he was supposed to visit there and planned on getting close to him by pretending I wanted a blessing from him and then tearing his throat. At the end, he never came."

When asked about his reasons for seeking to kill the rabbi he said: "Rabbi Ovadia spoke against the Lubavitch Rebbe, He humiliated him so I had to assassinate him."

Close associates of Rabbi Ovadia were made aware of the threats and placed a metal detector at the entrance to his home.

Since the rabbi does not receive a bodyguard from the State, Shas party ministers who do receive State funded protection, decided they would accompany the rabbi when he left his home so that someone would be on hand to respond should he be attacked.

A mentally ill man who had previously run over a Chabad rabbi and was recently indicted for murder tells police: 'I came to Kotel to kill Rabbi Ovadia', but the rabbi cancelled his appearance at last minute.