« Keep Your Hands Off West Bank Settlements, Rabbi Ovadia Yosef Says | Main | A Stain That Will Not Go Away »

The New York City Health Department has identified 56 cases of Salmonella bacteria-related illness in New York City that are linked to eating MealMart brand kosher broiled chicken livers from the Schreiber Processing Corporation that were not cooked.

The smaller 8 ounce retail package label for what appears to be the same product [Hat Tip: ca.]. (However, Meal Mart tells me this product is completely cooked. Even so, the NYC Department of Health says the livers should be cooked by consumers before eating. Please ssee the updates at the bottom of this post.): 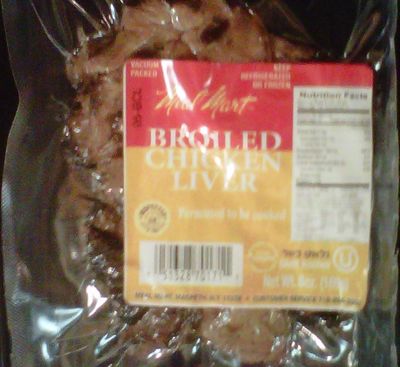 A closeup of the smaller 8 ounce retail package label. Note that it says, "Permitted to be cooked" [Hat Tip: ca.]: 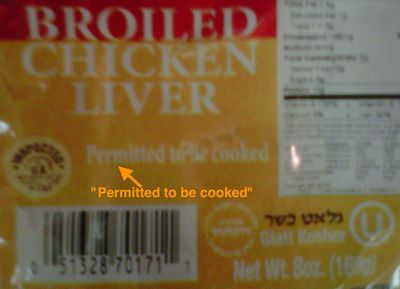 Salmonella Heidelberg bacteria strain found in chicken liver product that is not fully cooked; 56 cases of illness identified in NYC

Nov. 9, 2011 – The New York City Health Department has identified 56 cases of Salmonella bacteria-related illness in New York City that are linked to eating MealMart brand kosher broiled chicken livers from the Schreiber Processing Corporation that were not cooked. Even though they are labeled as “broiled” and may appear cooked, chicken livers from this manufacturer are not thoroughly cooked and should not be eaten unless they are cooked to an internal temperature of 165 degrees Fahrenheit. Salmonella illness has also been linked to chopped liver made from this uncooked product. Chopped liver made by the consumer after purchasing this product should also be fully cooked before consuming or discarded. Cases of illness have also been identified in New Jersey, Pennsylvania, Maryland, and Minnesota.

MealMart has issued a recall of this product and is cooperating with the Health Department’s investigation. The New York State Departments of Agriculture and Markets and Health, the U.S. Centers for Disease Control and the U.S. Department of Agriculture’s Food Safety and Inspection Service have collaborated with the NYC Health Department to identify cases of illness associated with this Salmonella Heidelberg strain, a common bacteria associated with food poisoning in humans.

The Health Department recognized a pattern of people reporting that they ate kosher broiled chicken livers or chopped liver before their illness began and this past week confirmed that the cases of Salmonella Heidelberg identified during the period of February through November 2011 had a common DNA “fingerprint.” Of the 56 people who were diagnosed with infection from this Salmonella strain, 12 were hospitalized. This Salmonella strain has been found in samples of kosher broiled chicken livers and in samples of chopped liver made from the same broiled chicken liver produced by MealMart Company in Maspeth, N.Y. Though consumers reported that they believed the product to be fully cooked, it is not safe to eat without additional cooking.

For specific retailers that sell these products and other establishments associated with this outbreak within these communities, visit the Salmonella outbreak link on the NYC Health Department’s website. The USDA’s Food Safety and Inspection Service has also posted information about this recall on the USDA website.

• Washing hands, utensils and cutting boards after they have been in contact with raw meat and before they touch other food.
• Cooking meat thoroughly to an internal temperature of 165 degrees Fahrenheit before consumption.
• Putting cooked meat on a clean platter rather than on the one that was used to hold raw meat.

Update 11:32 am CST 11-10-11 – I posted a label for the 5 pound package above. While it does say "cook fully" and have some related text, it does not appear to meet labeling requirements properly warning consumers that eating without cooking the product could result in illness or death.

This is why you'll see warnings on frozen pizzas telling consumers the product must be cooked to a certain temperature before consumption, but you may not see the same warning on fully cooked frozen roast beef.

Update 11:52 am CST 11-10-11 – ca tells me the smaller packages do not tell consumers to cook the product before eating or warn them the product is not fully cooked.

Update 2:04 pm CST 11-10-11 – ca sent in two pictures of the 8 ounce retail package label of what appears to be the same product. The pictures clearly show the label saying. "Permitted to be cooked". It does not appear to have any other warnings, and if it is not fully cooked, it is clearly in violation of safe labeling laws. The pictures are posted above.

Update 3:55 pm CST 11-10-11 – Meal Mart's HACCP/QC Manager Mordechai Milworn tells me that the 8 ounce package posted above is fully cooked and not covered by the recall:

the only product being recalled is the NOT-fully cooked chicken liver, packed in 10lb boxes.

All other chicken liver products are FULLY cooked products.

The not-fully cooked livers were sold to establishments, who were to cook the product before serving or reselling.

As to the future, we are discontinuing to sell NOT-fully cooked liver.

Susan Craig, MPH of New York City's Department of Health tells me that consumers should be careful when dealing with packaged chicken liver:

Our advice to consumers is to be sure to cook all chicken liver, especially that that may say it is broiled, to 165 degrees Fahrenheit. Regardless of the packaging, the important thing is that consumers should COOK this meat to this degree so that salmonella is not ingested.

The USDA and the New York State Dept. of Agriculture and Markets is working with the company to improve its labeling to be more clear to consumers. In the meantime, the safest bet is for consumers to cook any and all of these products to the recommended temperature.

I asked Ms. Craig for clarification, and she responded:

To be safe, we recommend cooking broiled chicken livers to 165 degrees Fahrenheit. The packaging you are pointing to is confusing to me, so it may also be confusing to consumers. I’m not sure what permitted to be cooked means. It is advisable for consumers to cook chicken livers marked broiled as they are not fully cooked and to be safe, it is best for them to cook even “fully cooked” items to the recommended temperature.

The New York City Health Department has identified 56 cases of Salmonella bacteria-related illness in New York City that are linked to eating MealMart brand kosher broiled chicken livers from the Schreiber Processing Corporation that were not cooked.