« Haredim Step Up War Against "Taliban" Women | Main | After Almost 2 Years Of Violence And Intimidation, Bookstore Caves In To Haredi Street Gang's Extortion »

Produced for use in haredi schools, the paperback dictionary – published by Oxford for Great Britain's Union of Orthodox Hebrew Congregations and carrying the UOHC's hechsher – censors out words haredi rabbis found objectionable. 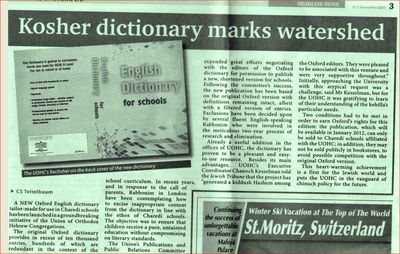 Update 4:50 pm 11-29-11 – The Satmar hasidic movement did it. Geoffrey Alderman writes in the (London) Jewish Chronicle [hat tip to JWB for this]:

…The Dictionary for Schools that was the subject of the Tribune report is not an "Oxford" dictionary. The Tribune report claimed that OUP's editorial team "were pleased to be associated with this venture." But I have it on record from OUP that the Charedi dictionary does not carry the imprimatur of OUP and OUP has further explained that "the editorial decisions were made by UOHC, not OUP's dictionary editorial team."

OUP routinely licenses its lexicographical data to a wide range of customers, who - within limits - are free to use the data to create dictionaries of their own. In this case, OUP was approached by the Beis Rochel D'Satmar Girls' School, with which an agreement was entered into enabling the UOHC to create- from OUP's data - a dictionary under its own imprint. This publication, available from next January, can be sold only to Charedi schools affiliated to the Union, and will not be publicly available.

But the matter certainly cannot end there. The Charedi dictionary is intended for young people studying for the GCSE - say, 14-16 years of age. In two more years, some will become adults - full citizens of the UK with the right to vote. I do not have a complete list of the words of the genuine Oxford school dictionary that have been omitted or modified in the Charedi version. But I have been told by various spokespersons that these words amount to "several hundred" and include "homosexual", "gay", and "prostitute". When I protested that the word "prostitute" occurs in the Hebrew Bible (it was, you may recall, in the "house" of Rahab the harlot that Joshua's spies were billeted before the assault on Jericho), I was told in no uncertain terms that the house was merely an inn, and Rahab merely an inn-keeper.

Well, what about "homosexual"? Sodomy is not only mentioned in the Hebrew Bible, it is expressly forbidden, and you can hardly forbid what you do not explain. Yes, came the reply, but it's explained in Hebrew, not English.…

Posted at 10:53 AM in Bans & Censorship, Books, Haredim | Permalink

Produced for use in haredi schools, the paperback dictionary – published by Oxford for Great Britain's Union of Orthodox Hebrew Congregations and carrying the UOHC's hechsher – censors out words haredi rabbis found objectionable.