Die Rather Than Bring The Internet Into Your Home, Haredi Rabbi Says 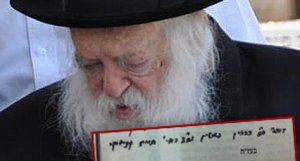 Once again, Gedolei Yisrael Shlita [important Ashkenazi haredi rabbis] are calling on the tzibur [“the congregation,” in this case, haredi Jews] to distance itself from the internet, warning against the dangers to a Jewish home from the internet. In an sharply worded letter, one being described as “unprecedented” by the [haredi] daily [newspaper] HaMevaser, HaGaon HaRav Chaim Kanievsky Shlita states the internet is in the category of ‘yahereg v’al ya’avor’, [something you must die for rather than transgress] stating the internet must be avoided at all costs.

The Rav is quoted as adding that while the induction of females into the IDF is also in the category of ‘yehereg v’al ya’avor’, the internet is far more serious today. Rav Kanievsky is quoted by HaMevaser as saying that there is no excuse to permit the internet for those claiming it is essential for a livelihood since rabbonim [rabbis] have already ruled the threats that are associated with the internet are simply too great and one must simply distance oneself from it.

The report adds that even after filtering has been installed, there is no heter for internet in one’s home, even for a livelihood, warning one who brings internet into one’s home brings the yetzer hora [evil inclaination] into the home.

NOTE: YWN has not seen this letter, and is simply quoting a report in the Hamevaser.

Meanwhile, the number two rabbi in the Vishnitz hasidic group ordered hasidim to turn over their iPhones to him:

HaRav Yisroel Hager, son of the Vishnitz Rebbe of Bnei Brak, was in Brachfeld on Monday night, taking part in a chanukas habayis [dedication] of a new Vishnitz beis medrash [study hall] in Modi’in Illit. During the rav’s address, he mentioned the prohibition of using an iPhone, which he said is being used by chassidim in the kehila [congregation], instructing them to hand them in to him following the address.

He instructed Yungerleit [young men] present not to go directly home following his address, but to deposit the iPhone in the room before leaving, Chadrei Chareidim reports. The rav announced he was remaining for an additional two hours, permitting those who wish to go home and get their phone to forfeit it.

There is no mention as to how many iPhones were collected as a result of the rav’s appeal.

In his post-Tishrei [i.e., post-Autumn Jewish holidays] address, the rav addressed the prohibition of using the internet, warning chassidim they must not have internet in their homes.

Posted at 09:55 AM in Bans & Censorship, Haredim, Israel, Web/Tech | Permalink

Die Rather Than Bring The Internet Into Your Home, Haredi Rabbi Says