« Three Years Later, Mumbai's Chabad House Still In Disrepair From Terror Attack | Main | Chief Rabbi Responds To Series Of Reports About The Growing Number Of Jews Who Avoid His Rabbinate At All Costs »

The concentration on the dancers' faces was clear through the large windows. In leggings and layers of loose tops, the young women and men arched and spun gracefully as they rehearsed. There was nothing unusual about the rehearsal itself. What was unusual was the dancers' visibility to those passing by the Kolben Dance Company studios located on a back street in what was one a multicultural neighborhood full of artists near downtown Jerusalem. 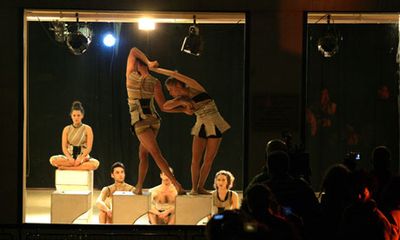 The concentration on the dancers' faces was clear through the large windows. In leggings and layers of loose tops, the young women and men arched and spun gracefully as they rehearsed Babel, the contemporary dance show currently performing in Jerusalem.

There was nothing unusual about the rehearsal itself. What was unusual was the dancers' visibility to those passing by the Kolben Dance Company studios.

Since the company renovated its premises in the centre of Jerusalem, installing picture windows that let passers-by see the rehearsals, ultra-orthodox Jews in the locality have waged a campaign against what they call the "indecency" of the women dancers.

They have demanded that the company close the blinds to conceal the women, banging on the windows and yelling through the glass whenever it has not complied.

Last week the company took a stand. It raised the blinds for an informal performance of Babel and the dancers continue to rehearse in full view.

The campaign by Haredi Jews against the dance company is not an isolated one. Over the past few years, Haredim have also persuaded companies to remove images of women from advertising billboards in Jerusalem and from the sides of buses, and have defaced or ripped down many of those that remain.

They have pressed for segregated sections on public transport and separate entrances for men and women at post offices, pharmacies, health centres and supermarkets. Last month they tried to impose a barrier on a street in Jerusalem to force men and women to walk apart during the Jewish festival of Sukkot.

Their rabbis are campaigning against female soldiers taking part in army singing ceremonies, with one urging male soldiers to walk out of such events "even if there's a firing squad waiting outside to kill you". They have also demanded that women be forbidden from taking up combat positions.

Nineteen reserve major-generals, including two former heads of the air force, wrote to the defence minister, Ehud Barak, this month, warning that acquiescence to the rabbis' demands – "the separation of women from the public sphere" – would "damage the fundamental values of Israeli society".

The Haredim say Jewish religious teachings demand modest dress, the segregation of men and women in public, and a prohibition on women singing in the presence of men in case it arouses shameful thoughts. Their opponents, who include religious and secular Jews, say the extremist Haredi campaign is an attempt to "erase" women from public life and control the public arena.

Tension between the Haredim and other Jews is mounting across Israel. But it is acute in Jerusalem, where the proportion of Haredim is more than 20% and rising fast because of their high birth rate and the flight of many secular Jews from the city. Many non-Haredim say that the ultra-orthodox wield disproportionate influence on Jerusalem's politics and social policy. Amir Kolben, the founder of the dance company, says its visibility is only one issue. "Jerusalem is full of friction points between ultra-orthodox Jews and secular culture. We have nothing against religious or orthodox Jews, but unfortunately this is not the case from the other side," he said.

The company installed large windows because "we want to share our art with Jerusalem people; we want them to feel the city has an artistic beating heart".

Haredi representatives asked Kolben to keep the blinds lowered, a request that he declined. The company then received two letters from the city council, which owns the building, demanding compliance. The letters were from one councillor and a former employee, and were unofficial, according to the council. "These premises are not secured for us. We depend on the goodwill of the municipality," Kolben said. But last week, in conjunction with Yerushalmim, an organisation that campaigns against religious extremism in Jerusalem, Kolben raised the window blinds. "We want to claim our right to be here on our terms and communicate with the Jerusalem street and express ourselves as we want," he said.

The reaction has been renewed window-banging and shouting. "I am very worried," said Kolben. "I fear that someone will come at night and break the windows or start a fire."

The issue, he said, is artistic freedom. "Jerusalem is a very complicated city. Dance is one of the few performing arts still at work here. For a long time, many artists and students have left because they don't find enough options to present themselves or enough audience which is interested."

Riki Shapira, a lawyer and activist with the liberal Israel Religious Action Centre, agrees. "The good thing is that people are now starting to understand they must do something: protest. The Haredi population is very strong and successful. That's why it's a struggle," she said.

Her organisation takes calls from Haredim opposed to sex segregation, she said. "Many understand where this is taking them, to a ghetto. Some don't want that, but they can't speak out."

Jerusalem city council says it opposes sex segregation. "We act with no regard to and with no acceptance of any means of segregation or inequality in the public sphere," said a spokesman. He added that the council's own advertising included images of women, but the city council "does not regulate the private market in advertisements".

The spokesman denied that the secular mayor, Nir Barkat, was susceptible to political pressure from the Haredim. "Mayor Barkat works to develop all sectors of the city and improve the quality of life for all its residents," he said.

The mayor has been supportive and encourages young artists to perform, according to Kolben, who added that his public rehearsals would continue. "This is our home, despite the pressures. If we don't raise our voice, there will be no voice, and Jerusalem will change forever. There is a possible price we may pay, but if we vanish, secular Jews will also pay the price."

Was he optimistic that the tide was turning? "No. We are not strong, we are very weak. We are walking on shaking ground, and we need all the support we can get."

The concentration on the dancers' faces was clear through the large windows. In leggings and layers of loose tops, the young women and men arched and spun gracefully as they rehearsed. There was nothing unusual about the rehearsal itself. What was unusual was the dancers' visibility to those passing by the Kolben Dance Company studios located on a back street in what was one a multicultural neighborhood full of artists near downtown Jerusalem.