Rabbi Nosson Tzvi Finkel, the rosh yeshiva of the Mir Yeshiva in Jerusalem, the largest yeshiva in world, has passed away. 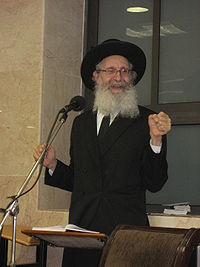 Based on the conflicting reports received this morning, the rosh yeshiva went into cardiac arrest and EMS personnel were unsuccessful in resuscitating him.

HaGaon HaRav Nosson Tzvi Finkel was born in Chicago, Illinois on March 12, 1943 to Eliyahu Meir Finkel. He married the daughter of Rabbi Beinish Finkel, who was the son of Rabbi Eliezer Yehudah Finkel, and Sara Greineman. Rav Finkel himself is a direct great-grandson of the Alter of Slabodka, whose name he bears. His wife is a second cousin of his. His brother is Rabbi Gedaliah Finkel, another lecturer in the yeshiva.

When once asked by a student why he never took drugs to calm the Parkinson’s disease he suffers from, he answered that when inquiring about the drugs, his doctor had told him that it would have an effect on his memory. “I’d rather be ill my whole life than to forget even one word of the holy Torah.”

Rabbi Nosson Tzvi Finkel's mother, Sarah, grew up in St. Paul, Minnesota on the block behind my father and aunts. Their back yards almost touched. Sarah's younger brother Victor was a friend of mine later in his life, and one of his sons and I went to pre-school, Hebrew school, Sunday school, and junior and senior high school together. And Rabbi Finkel's brother Gili (Gedaliah) was a teacher of mine in yeshiva in Israel.

I quite obviously don't share much, if any, of the worldview of Rabbi Nosson Tzvi Finkel.

But it's still sad to see him go.

As haredi gedolim go these days, he was pretty good guy who understood there were legitamate shades of gray in the world.

Maybe that's because he heard his mother talk about growing up in her tiny old neighborhood, which was filled with hasidim (many from Chabad rebbes but not from Lubavitch), former hasidim (same), Litvaks and former Litvaks, socialists, communists, Bundists and Zionists of all stripes, and where almost everyone somehow got along – even if they wouldn't daven at that other shul.

Rabbi Nosson Tzvi Finkel, the rosh yeshiva of the Mir Yeshiva in Jerusalem, the largest yeshiva in world, has passed away.