After Almost 2 Years Of Violence And Intimidation, Bookstore Caves In To Haredi Street Gang's Extortion

After 20 months of attacks and a quarter million shekels in damage, a Orthodox bookstore in the ultra-Orthodox Mea She’arim neighborhood of Jerusalem decided to accede to the demands of haredi extremists responsible for the violence – demands which allow the extremists to censor books. 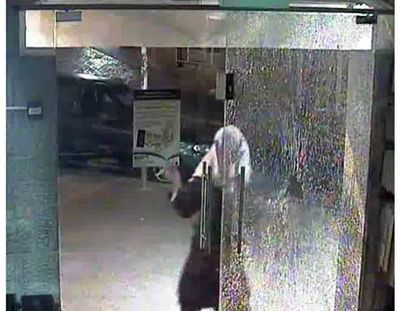 Security camera footage of a Sicarii member wearing a hood shattering the front door of Manny's/Ohr HaChaim Bookstore earlier this year. Publication of the existence of this and other security footage by the media this fall forced police to take action. Before that, repeated complaints to police by the store's managers were ignored, the store's managers claim.

After 20 months of attacks and a quarter million shekels in damage, a religious bookstore in the ultra-Orthodox Mea She’arim neighborhood of Jerusalem decided on Monday to accede to the demands of extremists responsible for the violence.

Under the terms of the compromise, Ohr Hachaim/Manny’s put up a large sign requesting that all customers dress modestly. A mashgiach, who checks the store’s inventory to make sure there are no controversial books, will go over the books in the coming week and require that some books be removed from the shelves, though they will not be permitted to remove any English books, said Marlene Samuels, one of the store’s managers.

A haredi group called Sikrikim deemed the store as “promoting immodesty,” and since Manny’s opened in March 2010, the group has smashed its windows more than a dozen times, glued its locks shut, thrown tar and fish oil at the store and dumped bags of human excrement inside. The owners were also personally threatened multiple times.

At the end of September, police arrested one of the central figures responsible for the attacks. Since the arrest, and with the construction of steel shutters to protect the store at night, violence against the store has decreased. However, a large demonstration outside the store on Sunday night convinced the owners of the bookstore to meet with the Sikrikim to come to a compromise.

“Even though it looks like things have quieted down there were still problems looming,” said Samuels. “The truth is it’s very hard to get the better of these people… you can never beat them.”

Samuels said the damage caused by the attacks, including hiring security guards to watch the store, has cost more than NIS 250,000 over the past year-and-a-half.

The store is popular with Anglo residents and tourists and carries many English-language holy books and Judaica items in addition to Hebrew books. The harassment stems from the bookstore’s past refusal to accept demands made by the neighborhood extremist group, which would require all businesses to observe specific “modesty standards.”

The Sikrikim, a small, violent group that numbers less than 100 families, had previously demanded that all English books be removed because the store attracted many tourists who were not properly dressed. They also condemned the store for carrying Zionist books and demanded the store shut down its website to avoid attracting foreigners.

Other store owners in the area have called the Sikrikim the “Mea She’arim mafia,” and said it was pointless to try to beat them. Almost all of the stores in the area have the same sign requiring customers to wear modest dress, and other bookstores said they allow Sikrikim mashgiachs to check their inventory to remove “non-kosher” books.

Manny’s provoked the ire of the Sikrikim by refusing to acquiesce until this week.

“In the beginning, the owners thought it would stop, that it was temporary, but it didn’t stop, it got worse and worse,” said Samuels. In September, after multiple complaints to the police, the bookstore appealed to the media, including The Jerusalem Post. Samuels said pressure from the media spurred the police to arrest one of the central figures responsible, which frightened the extremist group.

“[When] the police started to make arrests and became more active, it quieted them down, but it didn’t stop them, and it’s never going to end 100 percent,” said Samuels.

However, the arrest and police pressure gave them “bargaining power,” said Samuels, frightening the group into accepting a compromise rather than the extremists dictating the terms.

“It’s such a losing battle… So much money was lost in the damages, they realized they needed to come to a compromise,” she said of the owners. “It’s not going to be that terrible,” she added.

The name “Sikrikim” comes from the Latin “Sicarii,” a term applied – in the decades immediately preceding the destruction of Jerusalem in 70 CE – to an extremist splinter group of the Zealots who tried to expel the Romans and their partisans from Judea using concealed daggers.

These mafiosa also broke into the store and trashed it, hurled dirty diapers and garbage bags of excrement inside and threatened to physically harm staff and customers.

Until the existence the store's extensive security camera footage capturing some of this violence was publicized by the media, police did nothing.

But when that footage and the inaction of police was publicized, police reacted by denying their own inaction, by claiming they had not been notified of the violence, and then, after police denials were widely seen as lies, police began making arrests.

Even so, there is no police presence in the area and police did nothing of significance to protect the store or its employees and owners.

Rabbi Yaakov Litzman, a Gerrer hasid who is Israel's Deputy Health Minister, is apparently part of the ownership group of the bookstore.

The Sicarii and Ger hasidim are fighting a bloody and violent war for control of valuable Mea Shearim real estate known as the Warsaw Houses.

Litzman was recently given a special security detail by the Shin Bet, Israel's internal security service, because of threats on his life.

The bookstore deal with the Sicarii may have been made due to those threats as a way to appease the Sicarii and to direct their violence elsewhere.

Mea Shearim is for the most part a no-go zone for police, who find it too dangerous to operate in. When arrests absolutely must be made, police go in with large contingents of officers and with backup ready to flood the area at a moment's notice.

The Sicarii operate in the haredi neighborhoods that border Mea Shearim, and they have expanded to Beit Shemesh and to other haredi areas outside Jerusalem. They are also beginning to exert some influence in other parts of Jerusalem that do not border on Mea Shearim, like Har Nof, but which have large haredi populations.

As much as the average haredi may want the Sicarii disbanded and prosecuted, police action against any haredim – including against the Sicarii – is often met with hostility. Police are viewed as the instigators of violence, as Jewish antisemites, and as the enemies of haredim.

For the Sicarii to be stopped (and for Gerrer terror squads to be stopped), rank and file haredim have to stop vilifying police. At the same time, police have to take actions against these violent groups, even if those actions are dangerous and even if they carry political risk for the ruling coalition government. And police also need to be better trained at crowd control and better trained to protect the rights of citizens, even when protecting those rights is inconvenient or difficult.

None of these musts seem to be forthcoming, which means that in all probability the Sicarii will continue to grow and with them so will the violence and extortion.

After Almost 2 Years Of Violence And Intimidation, Bookstore Caves In To Haredi Street Gang's Extortion

After 20 months of attacks and a quarter million shekels in damage, a Orthodox bookstore in the ultra-Orthodox Mea She’arim neighborhood of Jerusalem decided to accede to the demands of haredi extremists responsible for the violence – demands which allow the extremists to censor books.