A Stain That Will Not Go Away 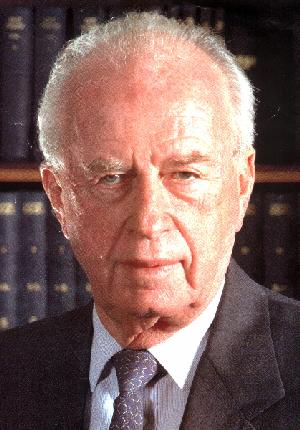 As is the case every year, the Torah portion on Isaac’s binding will be read at synagogues a few days after the Yitzhak Rabin memorial ceremony. As is the case every year, one’s thoughts will wander from the Yitzhak sacrificed by his father on God’s orders and spared at the last moment by an angel, to another Yitzhak who was sacrificed by someone who claimed to be acting on behalf of that same God, with no angel speaking out.

The Torah portion on Isaac’s binding has turned into a central pillar in Jewish faith and still shakes us up with the terrible power that beats in each of its verses. However, it appears we have yet to internalize the deep message it contains.

Abraham walked hand in hand with his son, Yitzhak, for three days, up the mountain, with silence lying between them; yet we can assume that many thoughts were raging in Abraham’s head. Did he ask himself whether he truly heard God’s name ordering him to bind his son, or whether he lost his mind? And maybe this is the act of Satan? And how could one distinguish the voice of God from the disguised voice of evil?

In Abraham’s case, the decision is clear; the angel stops him moments before he binds his son, and this by the way is the last time where God speaks with Abraham.

The daily trials faced by a person who aspires for nobleness put to the test not only one’s self control in adhering to the edicts of Jewish law, but also the ability to identify the good and distinguish it from the evil. The dilemma grows when at times one’s own moral voice is incommensurate with the voice of Jewish law. The Torah portion on Isaac’s binding, more than anything, draws the limits of action and the eternal litmus test: If an act contradicts natural morality, apparently it is not God’s will.

In the past week, a photo disseminated online showed a religious girl and boy beating up and kicking an older Palestinian woman walking on Hebron’s streets, with several IDF soldiers standing and watching. As a member of the religious Zionist camp, the sense of shame over the image suffocated me, along with the desire to explain and provide excuses – perhaps the image was doctored (we’ve seen it before) and who knows what happened earlier; after all, a photograph only presents part of the story, and how can one tell what the children went through in life.

Yet truth is that it’s all nonsense. One cannot explain away or show understanding for the wickedness and indifference of these children. Just like one cannot understand the vandalized tombstones and torched mosque. This is not Judaism’s way – it isn’t moral and it’s wrong.

The Rabin murder was not subjected to the required scrutiny by the religious Zionist camp, and the boundaries between that which is permitted and that which is forbidden were not redrawn. Anyone who dares speak out is dubbed a leftist and is kicked out of the camp.

Yet cannot one be religious, moral and in favor of Greater Israel? Is this the reason for the rabbis’ silence in the face of the despicable acts of the price tag children? Are the rabbis so scared that they prefer social respect over righteousness? Hasn’t the time come for them to perceive their role as one of angels safeguarding the camp; those who grab one’s arm before it brings down the knife?

Whether we want to or not, the murder of Yitzhak Rabin shall forever remain a terrible stain in the history of religious Zionism. Up until now, the camp’s leaders chose to look down and avoid a genuine inquiry into the rift, out of defensiveness and populism. The events of the past year prove that the rift has not disappeared; rather, it keeps on growing. Yet without mending it, this camp has no hope.

Hagai Stadler, a member of the religious Zionism camp, is a Principal at the Yarden Management and Investment Group.

A Stain That Will Not Go Away