The Chabad Rebbetzin In The Short Skirt

The wife of a Chabad ordained rabbi is photographed wearing a skirt that is too short according to normative halakha. The photo appears in a Jewish publication and the Chabad blog COLLive pics up the related story and runs the picture – but only after cropping it to hide the rebbetzin's immodest dress.

The uncensored photo as it appeared in Jwire: 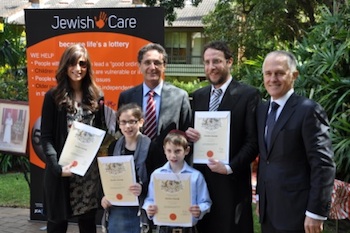 The photo as it was reproduced on COLLive. Note the crop to cut out the bottom of the photo showing her short dress: 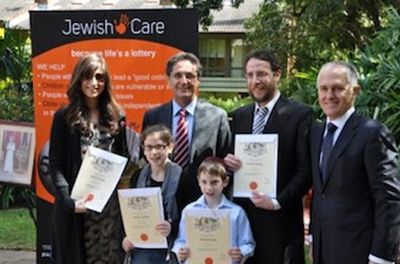 Screenshot from ColLive showing the photo in context: 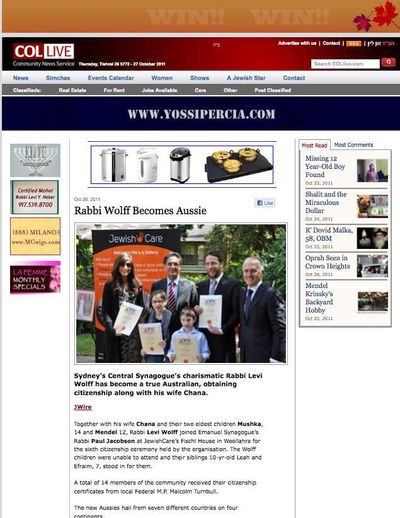 And here's a screenshot from Jwire showing the photo in context: 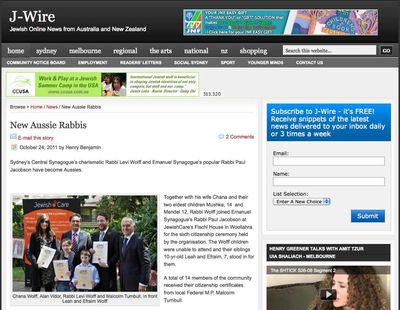 Here's the text of the entire article as it appeared on Jwire and COLLive:

Together with his wife Chana and their two eldest children Mushka, 14  and Mendel 12, Rabbi Wolff joined Emanuel Synagogue’s Rabbi Paul Jacobson at JewishCare’s Fischl House in Woollahra for the sixth citizenship ceremony held by the organisation. The Wolff children were unable to attend and their siblings 10-yr-old Leah and Efraim, 7, stood in for them.

A total of 14 members of the community received their citizenship certificates from local Federal M.P. Malcolm Turnbull.

Rabbi Wolff told J-Wire: “There could not be a more proud Australian than I am today. My family deems it a great honour to be members of such an open society and citizens of such a wonderful country. No-one could ever forget how Australia proved to become a haven for those seeking a new life after the horrors of the Second World War. And now, you have to excuse me as it’s time to throw another schnitzel on the barbie.”

Rabbi Wolff and his family have lived in Sydney for over ten years.

Rabbi Paul Jacobson has lived in Sydney for over five years..the last three with his Australian born wife,  Lisa. The New Jersey born rabbi told J-Wire: “This is something I really wanted to do. It is very important to me to be able to participate fully in the society in which I live and now I have the right to vote. I am a very proud Aussie.”

President of JewishCare, Alan Vidor, said: “ This is the first JewishCare citizenship ceremony I have attended and I reflect on how fitting it is that during JewishCare’s 75th year we are able to offers this unique annual community event that has become an important part of our communal calendar.

In 1936 JewishCare or Australian Jewish Welfare Society as it was then called was established to help Jews find new safe homes and a new start away from Nazi ravaged Europe and over the intervening period our community has flourished as a result of migration of people from around the world.  You might like to know that the 14 conferees today come from a total of 4 continents and 7 countries.

Today’s ceremony marks the first time that our ceremony has had the honour of conferring citizenship on a rabbi and not just one rabbi but in fact two, one from Central and one from the Emanuel Synagogue (both sides of the Jewish religious spectrum if you like).

It is also the first time we have held the ceremony during the festival of Sukkot, a time regarded as one for general thanksgiving for the year that had passed. And we have much to be thankful for and especially for the opportunity to live in a country that provides the freedom and stability of Australia.

We are fortunate to live in such an accepting country but it is the responsibility of every citizen to ensure future generations will have the same opportunities to live a country which celebrates and encourages the contribution of every citizen regardless of their place of birth or religious beliefs.

Your decision to accept the rights and responsibilities of Australian citizenship is one important step in continuing our community’s ongoing contribution and commitment to Australia.

As Australia’s newest citizens you each have your own unique stories, your hopes and dreams. You represent another group of outstanding new Australians who will, like previous generations, make your own unique mark on your adopted country.

That fact that you have chosen to take the monumental step of becoming citizens is something that makes me proud, both personally and as President of JewishCare.

I wish all new citizens Mazaltov.”

The Chabad Rebbetzin In The Short Skirt

The wife of a Chabad ordained rabbi is photographed wearing a skirt that is too short according to normative halakha. The photo appears in a Jewish publication and the Chabad blog COLLive pics up the related story and runs the picture – but only after cropping it to hide the rebbetzin's immodest dress.