New York City authorities said they will shut down a city bus service run by hasidic Jews if the group doesn't stop making women sit at the back of the bus. 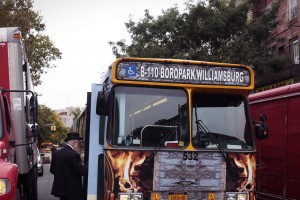 NEW YORK (Reuters) - New York City authorities said they will shut down a city bus service run by Orthodox Jews if the group doesn't stop making women sit at the back of the bus.

The Private Transportation Corp, which operates the city's public B110 bus under a franchise arrangement, has come under criticism following publicity about its practice of making women give up their seats in the front to promote Hasidic customs of gender separation.

New York City's Department of Transportation spokesman Scott Gastel said the agency's executive director Anne Koenig has asked the company to respond to the allegations and was waiting to hear back.

"Please be advised that a practice of requiring women to ride in the back ... would constitute a direct violation of your franchise agreement and may lead to termination of that agreement," Koenig wrote.

If such a violation is found, the franchise could be revoked, the DOT said in a statement.

The B110 bus runs through the sections of the borough of Brooklyn that are heavily populated by Orthodox Jews.

A student reporter at Columbia University in New York published a story about a woman told by other riders to give up her seat in the front. Other news organizations then sent reporters who encountered similar situations.

Mayor Michael Bloomberg told a news conference on Wednesday that gender separation is "obviously not permitted" on public buses.

The DOT said the public bus has been franchised to Private Transportation Corp since 1973 and is not subsidized by city money. No exemptions have been granted to the company to comply with the city's anti-discrimination standards, it said.

Deborah Lauter, director of Civil Rights for the Anti-Defamation League, said in an e-mail to Reuters: "We oppose the practice of gender-segregation on public buses as discriminatory and unlawful. If a community feels it needs gender-segregated buses, then they should not involve the city."

New York City authorities said they will shut down a city bus service run by hasidic Jews if the group doesn't stop making women sit at the back of the bus.