Rabbi Amiel Keinan says 'great honor' to teach children from the now-closed, predominantly Ethiopian school Ner Etzion; Keinan enrolled his own son in Ner Etzion as the only white student, because 'it's an excellent school and we're against racism.' 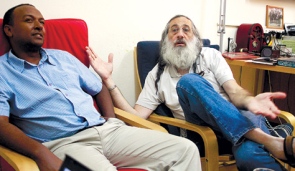 For Rabbi Amiel Keinan, the request that he teach a class of children at the Kfar Ganim Amit yeshiva in Petah Tivka who had been reassigned from the city's Ner Etzion school, was like coming full circle. All of the children at Ner Etzion other than Keinan's own son Ran were of Ethiopian background, and Ner Etzion was closed at the beginning of the current school year in an effort to integrate the students at other schools.

Keinan called it a "great honor" to teach the children from his son's former school. One of his new students, Daniel, said it was fun to attend the Kfar Ganim Amit school. Keinan's son, he added, was the only "nach" at Ner Etzion, using the word for "white" in the Ethiopian Amharic language. All of the other 289 children there were Ethiopian.

"We explained simple things to Ran. That he would be the only white child," Keinan recalled telling his son when it was decided to enroll him in the now-shuttered school. When Ran asked why, Keinan said he responded: "Because it's an excellent school and because we're against racism." When the child asked what racism was, the rabbi explained that other members of the public did not want to sent their children to school with Ethiopians "and we're against racism." Ran then expressed full agreement with the decision, the rabbi said.

When Ner Etzion was closed after Ran had been at the school for a year, Keinan said he told his son he had been a partner to an important effort. "I failed. I wanted to do something without a lot of talk and I thought [others] would join me," Keinan confessed, adding that when he tried to get other white parents to join the effort they asked whether he was "running a fever" and "why I was performing experiments on my son." Despite a year of attempts, he said he failed to get a single white parent to enroll a child at the school.

Keinan said among the responses he got when he encountered refusals from other parents was questions about what their children would gain from going to school with Ethiopians. "I was in shock," the rabbi recalled. "Society in Petah Tikva and in Israel in general is racist," he stated flatly.

The closure of Ner Etzion at the beginning of the school year last month came at the request of leaders of the Ethiopian community themselves, who preferred to see their children integrated in other schools. Keinan watched the process from the sidelines, but does not think it was handled properly. They should have involved sociologists and laid the proper groundwork, he complained. It took a month after the September 1 opening day of school before all the children from Ner Etzion were reassigned to other schools. Some were sent to schools in Petah Tikva while others are enrolled outside the city.

Unlike other grade levels at the old institution from which students were dispersed to a number of institutions, the entire class of sixth-grade boys was transferred to the Kfar Ganim Amit yeshiva where Keinan teaches. The group became known as the "immigrants' class." "From the minute it was decided to disband [the old school], I prayed a formula would be found to bring a group here," Keinan said in reference to the Kfar Ganim school, but he remained bitter about how things were handled with the Ner Etzion students: "The children were on the front lines. They used them and it didn't bother anyone that they were Ethiopian. I'm talking about the [Ethiopian] community itself, which I can still understand, but it was convenient for everyone, including the media."

Sitting with Keinan as he spoke to Haaretz was Ethiopian community leader Daniel Uriah, who chaired the campaign to close Ner Etzion. "It's no longer possible to give us directions and decide what's good for us and for our children," Uriah contended. "I am trying to distinguish between what happened up to now and what will happen from now on, but unfortunately we don't have faith in the system and it's really just the beginning."

For his part, Rabbi Shai Piron, who is the principal of Keinan's school, then implored Uriah, saying that the past cannot be erased but "if we don't create that trust, it's not going to work." Piron called the closure of Ner Etzion "courageous" and said it will be part of a national trend.

After the Sukkot holiday, Keinan will be joined by a teacher of Ethiopian background, who will also teach the newly-arrived students. Additional Ethiopian staff are to be recruited as well to teach throughout the school. "It's not right for the children to see that they [themselves] are Ethiopian so they have an Ethiopian teacher," Piron exlained.

"I want to see them succeed," Keinan said of the children, "and to show Petah Tivka and Israel as a whole that things can be done differently, that it's possible to be inclusive and accepting and that [doing so] is keeping [the commandments of] the Torah."

Rabbi Amiel Keinan says 'great honor' to teach children from the now-closed, predominantly Ethiopian school Ner Etzion; Keinan enrolled his own son in Ner Etzion as the only white student, because 'it's an excellent school and we're against racism.'