The Chief Rabbinate and haredi rabbis refuse to perform weddings of Down syndrome adults because they consider Down Syndrome people to be shotehs, fools or idiots. 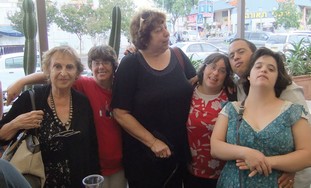 Down Syndrome adults in Jerusalem with two volunteers from Yated, a voluntary association for children and adults with Down Syndrome (Jerusalem Post)

The Jerusalem Post's medicine, health and science reporter, Judy Siegel-Itzkovich, has written an important article on Down Syndrome (i.e., almost always mildly retarded) adults who want to marry but are blocked from doing so by the haredi rabbinic establishment which controls the country's Chief Rabbinate and its rabbinic courts.

Here is a heavy edited excerpt. To read the whole article, please click on the link at the bottom of this post:

Despite medical advancements lengthening lifespans, religious establishment makes it difficult for Israelis with Down syndrome to marry under Jewish law.…

Unfortunately, with extremely rare exceptions, the Orthodox rabbinical establishment – the official Chief Rabbinate and haredi rabbis – has ignored the issue and refuse to perform weddings of Down syndrome adults.…

[T]he religious establishment considers adults with the syndrome as having the status of shoteh or mental disability (developmentally and with serious psychiatric disorders), which means they cannot get married according to Jewish law. Some rabbis won’t even include them in a minyan, the quorum of ten men required for some prayers. Most of the couples, said Oz, wanted to have a traditional Jewish wedding ceremony and official state recognition but they are denied this.…

[C]ouples here are intelligent enough to live together harmoniously and work for a living…But despite their successful daily functioning, they are not recognized by the official rabbinate as being mentally capable enough to get married. Some…work at a ski site in the Gilboa hills, in a supermarket and other useful jobs. One even writes poetry. Some of them met and fell in love thanks to the Feuerstein Institute (formerly known as the International Center for the Enhancement of Learning Potential or ICELP) in Jerusalem where they underwent training. It is chaired by Prof. Reuven Feuerstein, the world renowned developmental, clinical and cognitive psychologist, Israel Prize winner and candidate for the Nobel prize.

Now 90 years old, Prof. Feuerstein has spent many decades developing and using techniques for promoting the advancement of people with Down based on his theory of intelligence that insists intelligence is “not fixed, but rather modifiable” – that it can be modified through mediated interventions.…

Sagi['s], 33, and his 30-year-old wife Nitzan[’s]…short stature and innocent bearing makes them seem like children, but they are very much in love and hug each other frequently. They easily answer all questions posed in an interview.

“We first saw each other at my bar mitzva,” recalled Sagi, who proudly wears a simple gold band on her ring finger. The couple live in a sheltered housing facility and are able to go out to work. Since they fell in love, they were no longer doomed to loneliness.

“Sometimes we argue, but we always reach an agreement,” they said. “Arguments add spice to life,” added Nitzan.…

Prof. Reuven Feuerstein’s son, Dr. Rabbi Rafael Feuerstein, has a 22-year-old son, Elhanan, who was born with Down syndrome. The young man’s father and grandfather have been working with him almost from his birth to advance his development, and they have succeeded as nobody else could have. The kippa-wearing man earned matriculation from a yeshiva high school after being integrated in mainstream schools and is now volunteering in the Israel Defense Forces and aims at a nursing career. Dr. Rabbi Feuerstein, who is deputy chairman of the Feuerstein Institute and a founder of Tzohar (the voluntary organization of open-minded Orthodox rabbis), very much wants Elhanan to eventually marry.

“We are setting up a national service for preparing Down syndrome couples for marriage and providing ongoing assistance. Nobody knows exactly how many there are and how many want to marry. There are 20,000 Israeli adults with some type of mental disability, and this is a major problem. We intend to provide help with preparing couples for marriage, at the wedding and afterward.”

Dr. Rabbi Feuerstein declared that the halachic problem has to be dealt with by the Chief Rabbinate.

“It is starting to recognize the problem, but it is not organized enough. Many of today’s couples are graduates of the Feuerstein Institute. A public awareness of the abilities of people with the syndrome is needed. We need a public awareness campaign and change the atmosphere to make them think it can be done.”

“Thanks to the institute, the level of the youngsters has been raised. The level of medicine is much improved, and they live longer. Halacha doesn’t talk about Down syndrome but about cognitive and other functioning. It doesn’t designate a person with Down as being a shoteh.

“A normal person who was abandoned as a baby and was raised without human contact by creatures in the forest would be regarded as a shoteh. But there is ignorance among rabbis about what these young people are capable of doing, and indeed, only a handful have been married by Orthodox rabbis here. But even Down couples who wanted to get married by the official rabbinate are unaware that one can find someone who will approve; they just didn’t know and didn’t apply,” said the Feuerstein Institute deputy director.

“Our graduates know about Shabbat, bar mitzva and Rosh Hashana. They have much understanding. As for pregnancy, it is probably not desirable, but the government can’t order them not to get pregnant. And practically, they don’t have to be married to get pregnant.”

Dr. Rabbi Feuerstein concluded: “I want my son to marry when he is ready. I won’t say now whether he should be a father. But he should be able to fall in love and have a wife."

The Chief Rabbinate and haredi rabbis refuse to perform weddings of Down syndrome adults because they consider Down Syndrome people to be shotehs, fools or idiots.