« Should A Powerful Congressman Fire His Senior Advisor Because The Advisor Is In Cherem For Refusing To Give A Get? | Main | Mea Shearim Haredim Ban Women From Public Streets »

City workers have removed signs warning women in a Hasidic neighborhood in Brooklyn to step aside for men. The signs were first reported on FailedMessiah.com. 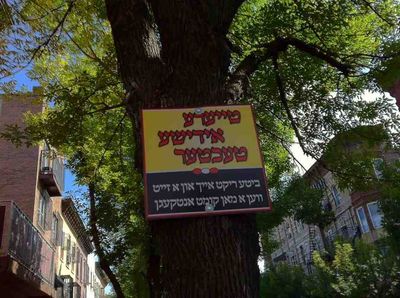 City workers have removed signs warning women in a Hasidic neighborhood in Brooklyn to step aside for men.

But the Parks Department says the teardowns in South Williamsburg had nothing to do with the message itself; it's just illegal to post signs on street trees.

"We do not know who put up the signs," said Parks spokeswoman Trish Bertuccio.

The large signs started popping up in the neighborhood more than a week ago. They had a Yiddish message that translates as: "Precious Jewish daughter, please move to the side when a man approaches."

Neighborhood residents were annoyed the plastic signs, which were bolted into the wood, were taken away.

"The signs don't bother anybody," said Abraham Klein, 18. "Men and ladies don't go together. It's just our religion."

Faye Grwnfeld, 70, said the signs were "a private thing" - even though they were posted on public property.

"It's taking away freedom of speech," she said.

The signs didn't indicate who put them up, but talk in the neighborhood suggested they were posted by a hard-line rabbinical group.

Deborah Feldman, an ex-Hasid and author of "Unorthodox: The Scandalous Rejection of my Hasidic Roots," said no one in the neighborhood, where she once lived, would have been surprised by the signs.

"This is standard practice in Hasidic communities all over: Step aside when a man is approaching you from the opposite direction," she said.

She said the signs likely were posted as part of a crackdown on rebellious behavior by women.

"It's a way of the community reminding people to stay in line, so to speak," she said.

Feldman noted that similar signs can be seen in Hasidic strongholds like upstate Kiryas Joel and New Square - and they didn't make the papers like the ones in Williamsburg did.

"This is nothing new. It's getting attention because it's Brooklyn, and Williamsburg is no longer an isolated bubble," she said.

Here's a lesson in journalism for you.

I broke this story a week ago.

The Gothamist does the story and cites FailedMessiah.com as its source.

WPIX does a report that I did not see that apparently does not cite FailedMessiah.com or the Brooklyn Paper. (Update 7:30 am CDT – And so did ABC. I've now posted that video below.)

Ha'aretz and Gawker do the story and cite only the Brooklyn Paper.

The Daily News does the story and cites…nobody.

The News does credit the Brooklyn Paper for the photo it used, but that's because a photo editor, rather than a news editor or a reporter, had to get permission to use it.

WPIX, Ha'aretz, Gawker and the Daily News are wrong. They all have the obligation to cite the actual source of the story, FailedMessiah.com, along with the Brooklyn Paper for its addition that the city had removed the signs.

But many newspapers refuse to cite blogs, and they steal stories first reported on blogs and report them as their own on a near daily basis. And they treat small local papers no better than blogs.

Gawker is usually much better about citing sources. Why it failed to correctly do it this time I don't know.

At any rate, realize that when you read the Daily News and the NY Post, some of what you read was first reported by bloggers, and that many of the reporters who work for these tabloids mine blogs for their story ideas and for potential sources but rarely cite those blogs as sources.

Some of the time that's not such a big deal.

But other times, like this one, where the provenance of the story is crystal clear, there's really no excuse.

Update 7:30 pm CDT – ABC News also did a report that does not mention Failedmessiah.com or the Brooklyn Paper. Here's the video:

Update 12:36 pm 10-12-11 – Watch WPIX claim credit for breaking the story and for the signs being taken down, even though that credit belongs to FailedMessiah.com and the Brooklyn Paper:

City workers have removed signs warning women in a Hasidic neighborhood in Brooklyn to step aside for men. The signs were first reported on FailedMessiah.com.