"Marrying gentiles is like playing into the hands of the Nazis," Yad Vashem Council Chairman and former Chief Rabbi Yisrael Meir Lau has been quoted as saying to students from an Israeli high school, causing an uproar among students. 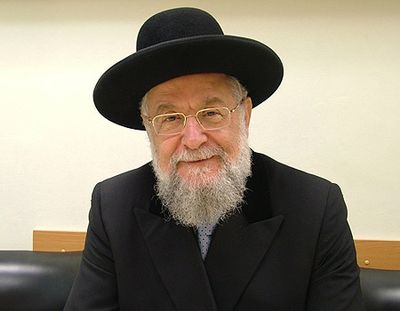 "Marrying gentiles is like playing into the hands of the Nazis," Yad Vashem Council Chairman and former Chief Rabbi Yisrael Meir Lau has been quoted as saying to students from Ramat Gan's Ohel Shem High School.

According to the students, the rabbi made the remark during a lecture on the Holocaust and on his personal memories as a survivor of the Buchenwald concentration camp which he delivered to teenagers who had returned from a trip to Poland.

Lau's remark and the nature of his lecture caused several 12th graders to walk out of the auditorium during the lecture, the students said.

One of the teens who left the room explained, "As far as I understood, the lecture's point was that marrying non-Jews is forbidden, and according to Rabbi Lau, marrying gentiles is 'playing into the hands of the Nazis.'

"This remark was made toward the end of the lecture and made me very angry. As soon as it was said, I got up and left. I came to the lecture without any skepticism and tolerant toward his opinions, otherwise I would have walked out at an earlier stage."

The student addressed other remarks made by the rabbi, which angered him. "We were told about the daughter of a respected rabbi who disconnected from religion during the Holocaust, married a goy, had a child and sent him to a convent," he recounted.

"The lecture also included Bible verses, one which I particularly remember was from the Book of Psalms, and according to the rabbi, it described the Holocaust before it happened. This was said after he claimed that the Nazis tried to destroy Judaism and not just the Jews, so basically the Jews drawing away from religion are destroying Judaism."

Another 12th grader shared the unpleasant atmosphere caused by the rabbi's remark. "He spoke about his life in Poland and about the Holocaust, and then began preaching about assimilation," he recounted.

"He said the Jewish people must not assimilate and that we must maintain the Jewish identity. In addition, he presented delusional statistics, claiming that had there been no assimilation the United States would now have 30 million Jews, and showing contempt for those who assimilated – as if they are inferior to others."

Some students were upset over their fellow classmates' protest. "I saw students leaving in the middle of the lecture, not listening, and some even chose not to enter the auditorium at all. It made me very angry and bordered on disrespect for an elder and honorable person," a 12th grader said.

"A spontaneous discussion on the issue continued in the classrooms," she added. "Many were irked by the fact that we are forced to enter lectures. We have listened to many lectures during our three years in Ohel Shem, and I think the only reason they were angry was because that person is a rabbi and now a secular man.

"But Rabbi Lau is a person who contributes to the community. He is an outstanding man and should be respected if only for his position and for being an honorable person, regardless of his beliefs."

And weren't you irked by the saying about marrying gentiles?

"Every person can take this sentence to a different place. The Nazis tried to hurt Judaism, and there is a point in the rabbi's remark that assimilation is a spiritual victory for the Nazis.

"The lecture was not religious in my opinion and I didn't see any incitement attempts. The word 'assimilation' was mentioned in only one sentence and the rabbi was not trying to influence us. If a secular person had said the exact same thing, it would have been received differently."

The former chief rabbi's office issued the following statement in response: "Rabbi Lau has been delivering lectures at Ramat Gan's Ohel Shem High School for many years now, and this time too he appeared before nearly 400 12th graders.

"The rabbi did not see any of the students leave during the lecture. On the contrary, he got the feeling that the students were attentive and fascinated by what he had to say."

As for the rabbi's remarks, his office said: "It's no secret that the number of Jews in most of the world's countries is steadily declining – not because of their immigration to Israel but because of intermarriage and assimilation. Therefore, self-examination is needed during the High Holidays.

"This troubling phenomenon serves generations of Israel's enemies, who envy the Jewish people's survival. The rabbi regrets any extreme reactions from those who surely did not listen to what he was saying and did not absorb the message stemming from the lecture."

The municipality said in response, "The Ohel Shem School encourages an open dialogue in democratic and pluralistic frameworks and hosted Rabbi Lau. Several students who were unsatisfied with certain opinions acted in a disrespectful manner and walked out, and we regret that.

"The school is unaware of the discussion reaching the classrooms, although we encourage an open dialogue as part of our values-based education."

"Marrying gentiles is like playing into the hands of the Nazis," Yad Vashem Council Chairman and former Chief Rabbi Yisrael Meir Lau has been quoted as saying to students from an Israeli high school, causing an uproar among students.