Rabbi Rivkin's father stood up to the Rebbe and in response was mercilessly harassed and hounded by hasidim until the elderly man dropped dead. 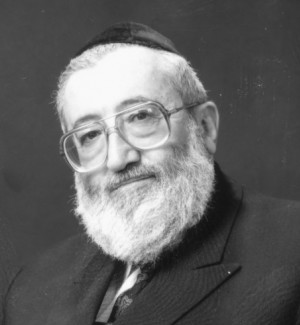 YWN regrets to inform you of the Petira this past Motzai Shabbos of Horav Sholom Rivkin zt”l – Chief Rabbi Emeritus of St. Louis Missouri.

Rabbi Rivkin was the son of Horav Moshe Dovber Rivkin zt”l, beloved Rosh Yeshiva of Yeshiva  Mesivta Torah Vodaath. A levaya was held last night at Young Israel in St. Louis and will be held this afternoon at 3:30 pm (Monday) at Torah Vodaath in Brooklyn. The niftar will be taken to Eretz Yisroel where there will be a levaya at the Shamgar Funeral Home in Yerushalayim at 6:30 pm on Tuesday evening. The Kevura will be on Har Hazaysim near the kevarim his parents and late wife, Rebbetzin Pepi (Zuckerman) Rivkin a”h who passed away this past winter.

Rabbi Rivkin learned in Torah Vodaath and Bais Medrash Elyon and was a close talmid of Harav Shlomo Heiman zt”l and Harav Reuven Grozovsky zt”l. In 1949, with the encouragement of the sixth Lubavticher Rebbe, Harav Yosef Yitzchok Schneerson zt”l, Rabbi Rivkin became the Rav in the Nusach Ha’Ari shul in St. Louis, MO. He later served as Rov in the Bikur Cholim shul in Seattle, and Young Israel of Bayswater, NY and also served on the Bais Din of the Rabbinical Council of America.

In 1982, he assumed the position of Chief Rabbi of St. Louis and Av Bais Din of the Vaad Ho’eir (OV) where he oversaw the Kashrus and other Halachic matters in the city. He was a renowned expert in Hilchos Gittin and other areas of Halacha. He was known for his tremendous Ahavas Yisroel and care and concern for Yidden of all backgrounds.

He is survived by a son, Rabbi Bentizon Rivkin, and a daughter Yocheved Rubin. May he be a mailitz yosher for his mishpacha, the various communities that he served, and all of Klal Yisroel.

Rabbi Rivkin's father was a Chabad hasid when that did not mean the same the thing as being a Lubavitcher hasid.

He lived in Crown Heights and was asked by Menachem Mendel Schneerson to sit on a newly formed rabbinic organization for Lubavitch. Rabbi Rivkin agreed.

There were seven members named by the Rebbe, including Rabbi Rivkin.

At the group's first meeting, the Rebbe's private secretary came to the group with instructions from the Rebbe: excommunicate an Israeli politician from the National Religious Party.

Because the pol would not do what the Rebbe ordered him to do, politely pointing out to the Rebbe that the NRP had its own rabbis and it was their rulings it followed – not his.

The Rebbe was enraged and ordered the excommunication.

Six of the rabbis signed an excommunication order.

But Rabbi Rivkin refused, pointing out that the pol hadn't done anything against halakha.

The Rebbe got even more upset.

He ordered his secretaries to post a list of the seven rabbis on the new rabbinical organization and to post the excommunication order with the six signatures.

After that was done, Menachem Mendel Schneerson spoke a farbrengen (a public hasidic gathering). He screamed about the "one who would not sign," ranting and raving.

When he would leave his home to go to his yeshiva, he was spat on by Lubavitch hasidim.

The Yiddish press of the day covered the story, and the Rebbe even held a press conference of sorts, at which he asserted that the violence against Rabbi Rivkin could not have been committed by hasidim, because no true hasid would act that way.

When the press conference was over, he asked his secretaries to put out the word that the attacks on Rabbi Rivkin had to be toned down.

And for a brief time, they were.

Then, when the story faded, hasidim relaunched their campaign of harassment against Rabbi Rivkin. Shortly afterward, Rabbi Rivkin's doorbell rang in the middle of the night. Rabbi Rivkin was on the second floor. As he approached the the stairs, upset, he had a stroke, tumbled down the stairs and died.

Many of Menachem Mendel Schneerson's hasidim reacted with near glee, and hasidim in 770 were fond of saying that people who cross the Rebbe will be struck down, just like Rabbi Rivkin was.

The harassment that eventually killed Rabbi Rivkin was instigated by the Rebbe, Menachem Mendel Schneerson.

Rabbi Rivkin's death is a part of the Rebbe's legacy just as the beating of his sister-in-law under similar circumstances is.

What an unholy man.

Rabbi Rivkin's father stood up to the Rebbe and in response was mercilessly harassed and hounded by hasidim until the elderly man dropped dead.