« Women Removed From Jerusalem Ads Due To Haredi Pressure | Main | Racist Rabbi: "Better To Kill A Terrorist Than Call Police" »

A security guard at Chabad's Melbourne yeshiva who has been charged with multiple sex offences should have his bail revoked because he was seen with children, prosecutors say.

A security guard at a Melbourne Jewish school who has been charged with multiple sex offences should have his bail revoked because he was seen with children, prosecutors say.

David Cyprys, 43, who was a guard at Yeshivah College in East St Kilda, is charged with 29 counts of indecent assault and gross indecency relating to former students.

On Tuesday, prosecutor Karen Argiropoulos applied to revoke Cyprys's bail after he was allegedly seen with children "on the streets", in breach of a bail condition.
Advertisement: Story continues below

The court heard that the day when Cyprys was seen on the streets with children was a Jewish holiday.

However, Cyprys's lawyer Stephen Payne said he had seven or eight witnesses who could account for his client's whereabouts between 10am and midnight on that day.

When it was suggested the matter be adjourned, magistrate Luisa Bazzani replied, "You want to put him in jail, but not today?"

Mr Payne also asked that the court vary his client's bail to allow him to visit his synagogue.

The applications to revoke and vary bail will be heard on Wednesday.

Cyprys, a father of two who also runs a locksmith business, is alleged to have committed his offences between 1984 and 1991.

Setting bail in September, Ms Bazzani ordered Cyprys to report to police daily and not have contact with any children under 16 without supervision, including his own children and those of his new partner. 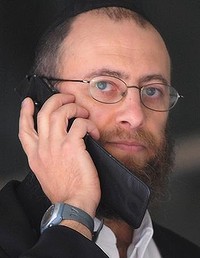 A SECURITY guard charged with sex offences against children at Yeshivah College in East St Kilda is facing jail over an alleged breach of his bail conditions.

David Cyprys, 43, is charged with 29 counts of indecent assault and gross indecency relating to events during his time as a security guard at Yeshivah, an orthodox Jewish boys' school, during the 1980s and early 1990s.

Five of the alleged victims are in Victoria, five in NSW and two in the US. They were aged between seven and 17 at the time of the alleged offences.
Advertisement: Story continues below

Cyprys, bailed under strict conditions in September, was allegedly seen with children without an authorised person present.

Prosecutor Karen Argiropoulos told the Melbourne Magistrates Court yesterday that Cyprys was seen with children at about ''9 or 9.30pm'' on a Jewish holiday.

She said police want his bail revoked because of the breach and there were witnesses that placed Cyprys with the children.

Stephen Payne, for Cyprys, said he would call witnesses that could account for his client's whereabouts that night.

The court will also hear an application from Cyprus to have his bail conditions changed to allow him to attend his synagogue, which is located within 100 metres of a school.

Under the bail conditions imposed after his arrest, Cyprys is banned from going within 100 metres of a school.

The court heard he was not able to attend a synagogue without breaching the condition.

Cyprys said he had not been to synagogue under the conditions and that usually he would attend most days.

A letter from Cyprys's rabbi was provided to the court to support his request.

Mr Payne suggested Cyprys should be allowed to attend the synagogue because services were held outside school times.

The court heard most synagogues were co-located with schools.

Both applications were adjourned and will be heard today [i.e., Wednesday].

A security guard at Chabad's Melbourne yeshiva who has been charged with multiple sex offences should have his bail revoked because he was seen with children, prosecutors say.