« "The Rubashkin Travesty: What You Can Do" | Main | The Next Greatest Threat To Israel's Security »

"Traditionally, you have the motivation of greed or financial gain. But Rabbi Nahum never sought or received any personal benefit. He never was involved in any cash transactions or international transaction. They tried to give him a $1,000 check and he returned it." 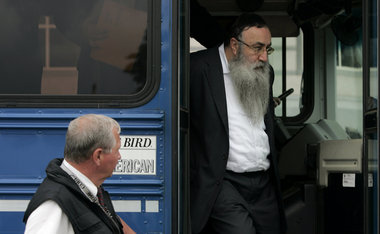 TRENTON — Rabbi Edmond Nahum, who prepared a young Solomon Dwek for his Bar Mitzvah and in turn was later targeted by the now infamous federal informant, received probation Thursday for his role in laundering money for Dwek.

Attorneys for Nahum described him as a victim in the sting and said he repeatedly questioned why Dwek wanted him to funnel checks through various charities he controlled.

Nahum, 58, served as cantor at the Deal Synagogue in Monmouth County where Dwek’s father had been rabbi. In June, he pleaded guilty to a one-count information charging him with operating an illegal money remitting business. Nahum admitted he illegally accepted and issued checks for thousands of dollars from Dwek, made payable to several religious charities he and others controlled.

The checks were passed on to Rabbi Saul Kassin, chief rabbi of Congregation Sharee Zion in Brooklyn, who then kicked back the money to Dwek, minus a commission. Kassin, 89, pleaded guilty earlier this year and was also sentenced to probation.

In a Trenton courtroom filled with members of Nahum’s congregation, attorney Justin Walder of Roseland said transcripts of surveillance recordings captured by the government showed Nahum was being used by Dwek.

According to Walder, one conversation related to Nahum’s confusion over the purpose of the transactions, and his repeated questioning of Rabbi Eliahu Ben Haim — a major player in the case who has also pleaded guilty and is awaiting sentencing on charges he laundered up to $1.5 million in supposedly dirty money for Dwek.

"Nahum has 14,000 questions about what’s going on with all the switching of checks," Ben Haim told Dwek, said Walder in quoting from the transcript.

"Nahum is an idiot," Dwek was said to have replied. "And stupid because he does not take anything."

Federal prosecutors would not make the transcript available.

Nahum was part of a sweeping federal corruption and money laundering sting that came to light two years ago and led to the arrests of nearly four dozen people, including mayors, legislators, five Orthodox rabbis and a man brokering black market kidneys for transplant. It was the largest federal sting operation in New Jersey history.

The key figure behind it all was Dwek, who secretly began cooperating with the government after being charged in an unrelated $50 million bank fraud. Many of the initial targets in the investigation were people Dwek knew well — including Nahum and Ben Haim.

Walder told U.S. District Judge Joel A. Pisano that Nahum’s role in the federal sting was different from others in the case.

"Traditionally, you have the motivation of greed or financial gain. But Rabbi Nahum never sought or received any personal benefit. He never was involved in any cash transactions or international transaction," Walder said. They tried to give him a $1,000 check and he returned it."

Dwek’s father, who helped Nahum come to this country after he left Syria, wrote a letter to the court in support of Nahum.

As part of the plea in which Nahum was described as a minimal participant, the U.S. Attorney’s office agreed not to oppose any motion for a non-custodial sentence.

Pisano imposed the lowest sentence — just one year of probation and waived any fine.

Notice that Nahum apparently took no money for himself or for any organization or cause, while the other rabbis took a cut from each transaction either for themselves, their charities or both.

They viewed it as a money making scheme.

Nahum, it seems, did not, and he truly resisted Dwek – and that's why he received the lightest sentence possible.

"Traditionally, you have the motivation of greed or financial gain. But Rabbi Nahum never sought or received any personal benefit. He never was involved in any cash transactions or international transaction. They tried to give him a $1,000 check and he returned it."