« Satmar Rabbi Busted For "Massive" Housing Fraud | Main | Hasidim Force Censorship On All Forms Of News, Connection To Outside World »

A Long Island rabbi is suing his ex-wife and the New York Post over the publication of sordid sex tapes that allegedly show him cavorting with prostitutes after a Sabbath service. 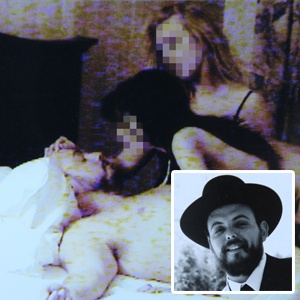 NEW YORK, Sept 14 (Reuters) - A Long Island rabbi is suing his ex-wife and the New York Post over the publication of sordid sex tapes that allegedly show him cavorting with prostitutes after a Sabbath service.

Avraham Rabinowich filed a lawsuit in New York state court Tuesday accusing his ex-wife, Amora, of breaching the terms of their divorce settlement by sharing the secretly filmed tapes with the Post, which published them on its website under the headline "The 'randy' rabbi - Prostitution sting in angry ex-wife's suit" on July 11.

The release of the tapes was designed to subject the rabbito "intense criticism, humiliation, embarrassment and scorn" designed to undermine his professional reputation, as well as his standing in a bitter custody battle between the former couple, according to the lawsuit.

The couple's divorce settlement -- finalized last September -- specifically prohibits either party from "directly or indirectly caus(ing) photographs, video or similar images of the other party to be disseminated to the media ... to hurt the reputation of the other in the community in which the parties work or reside," the lawsuit said.

The Post was aware of the terms of the divorce settlement but published the tapes anyway, facilitating the alleged breach of contract, the lawsuit said. It also accuses the Post of waiting until "several minutes before the commencement of the Jewish Sabbath" to alert Avraham Rabinowich about its decision to publish the tapes, leaving him no time to mount a legal challenge, according to the lawsuit.

Attempts to reach Amora Rabinowich for comment Wednesday were unsuccessful. A spokeswoman for News Corporation, the New York Post's parent company, did not immediately return a request for comment.

Morrison, Avraham Rabinowich's attorney, said he believed that Amora Rabinowich has moved to the West Coast but was not sure of her current whereabouts. She has not yet been served with the lawsuit, he said.

Avraham Rabinowich is a leader at the Bellmore Jewish Center in Long Island. He has served as vice-president of the Long Island Board of Rabbis since 2007.

The case is Avraham Rabinowich v. NYP Holdings Inc. and Amora Rachel Leah Rabinowich, in the Supreme Court of the State of New York, County of New York, index no. 11-110427.

A Long Island rabbi is suing his ex-wife and the New York Post over the publication of sordid sex tapes that allegedly show him cavorting with prostitutes after a Sabbath service.