Safety concerns over the practice of leaving a stove on have gained national attention. In 2005, a fire in Brooklyn that authorities blamed on a stove-top burner left on for Passover killed three boys and injured 10 other people, according to news reports. 13 people in Teaneck were taken to the hospital over Shavuot this year to be treated for symptoms of carbon monoxide poisoning caused a stove left on for the holiday. In Englewood, Fire Chief Gerald Marion reviewed nearly 11 years of records after learning about the Teaneck incident and realized that there was a higher rate of carbon monoxide calls to the city's Orthodox neighborhood. 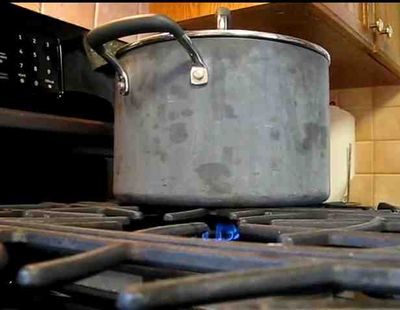 The following video only contains a small amount of the information from the print article, and is primarily useful for those of you who have never seen a blech used.

The article posted below the video has much more detail and is followed by safety tips:

A tradition of leaving the stove on during holidays in the Orthodox community is causing concern for some North Jersey fire officials who are trying to reach observant Jewish residents with a message about safety.

The issue came to the forefront this summer after 13 people in Teaneck were taken to the hospital to be treated for symptoms of carbon monoxide poisoning. Authorities blame a defective stove that had been left on for two days during the holiday of Shavuot.

Teaneck officials are taking an aggressive stance to warn all residents about the dangers of carbon monoxide. A life-threatening buildup of the colorless and odorless gas can be caused by improperly installed furnaces, poorly ventilated generators or a car left running in the garage. But the township fire department and ambulance corps is targeting its current warning toward the Orthodox community and met with the Rabbinical Council of Bergen County to discuss safety concerns.

"With leaving the stove on, we certainly know that it puts the community at a greater danger," Teaneck Fire Chief Anthony Verley said. "We want them to understand there are some deadly implications to this."

Families in the Orthodox community will leave a burner lit or the oven on low to be able to heat food because Jewish laws forbid creating or extinguishing a flame during religious observances. The practice is different on the Sabbath, when cooking is forbidden and food can only be warmed, which makes appliances such as a hot plate set on a timer an alternative to leaving on a flame.

Safety concerns over the practice of leaving a stove on have gained national attention in the Orthodox community in the past. In 2005, a fire in Brooklyn that authorities blamed on a stove-top burner left on for Passover killed three boys and injured 10 other people, according to news reports. The Fire Department of New York has worked with the New York Board of Rabbis to distribute safety information to Orthodox communities. Rabbi Joseph Potasnik, executive vice president of the board of rabbis, said the number of incidents has declined since such outreach began.

In North Jersey, fire officials are concerned about the potential for exposure to carbon monoxide. Verley believes that carbon monoxide calls in Teaneck have increased because newer homes are better sealed than older structures.

In Englewood, Fire Chief Gerald Marion reviewed nearly 11 years of records after learning about the Teaneck incident and realized that there was a higher rate of carbon monoxide calls to the city's Orthodox neighborhood. Marion is preparing safety tips that he plans to post on the city website and distribute to area synagogues before Rosh Hashana, which begins Wednesday at sundown.

"We just want to remind our residents to follow some basic safe practices," Marion said. "Of course we don't want to hinder anyone's cultural religious practices but there are things that can mitigate some of the dangers."

"Don't assume that because you don't see a skull and crossbones in front of your face, that it is not dangerous," said Larry Robertson, a hazmat technician for the Teaneck Volunteer Ambulance Corps. "The first rule is get out, the second rule is call the fire department."

The message to call authorities, even during a holiday or on the Sabbath, is being echoed by leaders in the Orthodox community.

"We are in agreement that if it's the feeling of the experts in the field that there is a potential danger and that people should contact the fire department when the carbon monoxide detector goes off, then people should do that, even on the Sabbath and holidays," said Rabbi Michael Taubes, of Congregation Zichron Mordechai, a past president of the Rabbinical Council of Bergen County.

"Sometimes it might not be a big deal, but we can't take that chance," said Taubes, who consulted with other rabbis who agreed that it's important to contact authorities if there is a potential danger.

Fire officials stress the residents should have working carbon monoxide detectors and working smoke detectors. Rabbi Daniel Senter, president of the Teaneck Volunteer Ambulance Corps, recommends that members of the Orthodox community change the batteries in their alarms before the holiday.

Although fire officials advise against leaving a burner on, for families that do, they recommend leaving two windows open on opposite ends of the house to create cross ventilation. In Teaneck, Verley and Senter recommend that members of the Orthodox community consider alternatives to be able to heat food, such as warming plates and crock pots. Although Senter doesn't expect residents to replace their stoves, he advised that electric units, which is what he has at home, do not give off carbon monoxide.

"The best thing that I could advise people that have to leave their stove on is frequently check the area," he said.

Trentacost also advised families to keep a close watch on small children, in addition to making sure their smoke detectors are working.

The New Milford Fire Department has also responded to carbon monoxide calls at Orthodox homes on holidays and will talk to residents about safety when it happens, said borough Fire Chief Ralph Leonardi.

"When we arrive at the scene. if we have established that is the cause, we will turn the stove off and we will inform them of the dangers of the situation," Leonardi said. "If that is an absolute necessity, they have to leave a window open or think twice about doing it. They can't keep the house closed up."

Some members of the Orthodox community are taking a renewed look at how they balance safety and tradition since the incident in Teaneck.

"I was born into this way of life," said L'via Weisinger, of Teaneck. "This is what we do."

But she now wonders if she is being safe. "I would love to hear from other people, what are ideas they have for safer ways to do it: Is what I am doing the safest way, or I am wrong," Weisinger said.

On holidays, Weisinger leaves a back burner on low covered with a large heavy pot full of water that is out of reach of young children. On the Sabbath, she covers the burner with an aluminum tray called a "blech" that is used to warm food. But she has a smoke detector and a carbon monoxide detector and always keeps a window open.

"I don't know anybody who can get around it unless you don't have hot food," Weisinger said.

"I think there are ways to do it safely," she said. "If we have all the information and we are careful, I think we are smart enough to be able to pull it together and make it work."

* All homes should have working carbon monoxide detectors. Authorities recommend homes have one on each level.

* Call the fire department if your carbon monoxide detector goes off. Rabbis advise that it is permissible to call on the Sabbath and holidays to avoid any risk to life.

* Consider alternatives to using the stove such as an electric hot plate or crock pot, which do not emit carbon monoxide.

* Do not keep any flammable items within 1 foot of the stove or crock pot.

* Do not use an extension cord with electric cooking devices.

* If a family must use a stove, leave a nearby window open 4 inches (about the size of a fist) and also open a window at the opposite end of the house for cross ventilation.

* Consider using an electric oven with a warming drawer. Electric ovens do not generate carbon monoxide.

Safety concerns over the practice of leaving a stove on have gained national attention. In 2005, a fire in Brooklyn that authorities blamed on a stove-top burner left on for Passover killed three boys and injured 10 other people, according to news reports. 13 people in Teaneck were taken to the hospital over Shavuot this year to be treated for symptoms of carbon monoxide poisoning caused a stove left on for the holiday. In Englewood, Fire Chief Gerald Marion reviewed nearly 11 years of records after learning about the Teaneck incident and realized that there was a higher rate of carbon monoxide calls to the city's Orthodox neighborhood.